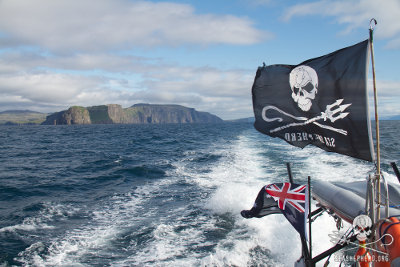 Sea Shepherd is dedicated to eradicating
the obscenity of whaling worldwide
Photo: Sea Shepherd / Simon Ager We don’t care what you call us, or what you think of us.

All your name calling, lies, accusations and hate rhetoric mean nothing.

Except to notify me to ban you from my page and to delete your words.

Hate us all you wish but it changes nothing. Sea Shepherd is dedicated to eradicating the obscenity of whaling worldwide. We equate the killing of whales with murder.

Taking the life of an intelligent, self aware, wild, sentient being is murder and every fabricated justification the murderers or those who sympathize with murder post, does not change that fact.

We are not alone in this opinion. The government of India representing over one billion citizens officially recognizes dolphins as non-human persons and the killing of a person is an act of murder.

It is also interesting that the Norwegian word for murder is “drap” and the Faroese themselves call their whale killing the Grindadrap or “whale murder.”

Sea Shepherd is not anti-Faroese. We are anti-murder and we believe in the conservation of life and of diversity and thus we do not oppose the Faroese for being Faroese, we oppose those particular Faroese citizens that indulge in cruelty, slaughter and ecological destruction.

Our objective is to make the entire world aware of this ongoing obscenity just as we are doing with the horrific murder of dolphins in Taiji, Japan.

We see any attempt to justify this slaughter as equivalent to someone attempting to justify rape, serial killing and child molestation.

What abattoir allows amateurish killers to torture animals while children look on or allows children to sit upon and mutilate the carcasses? Stop making such ridiculous comparisons. It just illustrates how desperate you are to defend the abomination you call the Grind.

The Faroe Islands rank as one of the most beautiful places in the world tarnished only by this foul bloody evil called the Grind. The whales are already suffering from the mercury and other heavy metal pollutants in the sea and because of this, Faroese children are exposed to these poisons, and to knowingly feed mercury contaminated meat to a child is quite simply negligent child abuse.

For those who demand that we respect this tradition, my answer is never. How can we respect murder and cruelty? We don’t respect people who inflict pain and death on the innocent no matter how much they attempt to justify it with meaningless words like tradition and culture.

For those who justify it because it is a tradition I can only state that barbaric traditions have no place in the 21st Century. If Catalonia can ban the bullfight, the Faroes can certainly ban the Grind. Cock-fighting, dog fighting, bear baiting, bull fighting are all traditions that have been banned in much of the civilized world. The Grind is simply an archaic practice of cruelty that serves only to demean and disgrace the islands that it is practiced on.

We believe that defending the whales is worth the risks we need to take. Sea Shepherd volunteers are ready to stand unarmed in opposition to the knife-wielding killers in the Faroe Islands.

We know that we are not just in the Faroes to defend pilot whales alone. We are there to defend diversity of life in the Ocean because the simple fact is that if the Ocean dies, we all die.

We defend the parts to protect the whole. Defending pilot whales is a battle in the war to save our Ocean from the destructive ravages of humankind.

Sea Shepherd is not specifically targeting the Faroes. We are in Taiji Japan for the Dolphins, in the Gulf of Mexico for the Sperm whales, in the Southern Ocean for the Minke, Fins and Humpbacks, in Western Australia and Hong Kong for the sharks, in Hawaii for the reef fishes, off the coast of West Africa to oppose the fish poachers, in the Galapagos to stop the shark poachers, and on the beaches of Guatemala to protect the turtles.

For those who say what are you doing about pollution I can say that Sea Shepherd’s The Vortex Project is dedicated to removing and recycling plastic from the ocean, and our Operation Toxic Gulf is working to investigate the toxicity levels in Sperm whales caused by the BP Deepwater Horizon disaster.

This is a global movement with a global agenda and the Faroe Islands are a part of this agenda.

We are dedicated to abolishing the Grind – no matter how long it will take, no matter the risks we must undertake.

And for those who say we are fighting a lost cause, my answer is that lost causes are the only causes worth fighting for.

For those who say we oppose the Grind because we profit from it, I can say that the volunteers on the ground and in our boats on Faroese water are there on their own time and at their own cost. I am not paid by Sea Shepherd to defend life in our oceans and not a penny of donations given to oppose the Grind goes into my pocket.

I know it is hard for people motivated by profit to understand how and why people can defend marine life without profit to themselves. The greedy are incapable of comprehending empathy and compassion.

The men and women opposing the slaughter of the pilot whales are men and women of true compassion and courage and they are deserving of respect and that is the reason I have zero tolerance for abusive, insulting comments.

I first began opposing the Grind in 1983. Three decades later I continue to oppose the slaughter and what I have seen is that whereas in 1983, the support in the Faroes for the Grind was 100%, that support has eroded away and now there is a significant Faroese opposition to the Grind. It may take some time to end this obscenity altogether but I think that one day we will finally see the end of it.

Our strategy has always been long term, a combination of documentation, exposure, international publicity and direct intervention and most importantly persistence.

In short we who oppose death and who champion life are in opposition to those who condone and inflict death and disdain the miracle of life.

The Grind must be and will be ended – that is our objective and we will not back down in the face of threats, insults and injury by the arrogant and the ignorant.