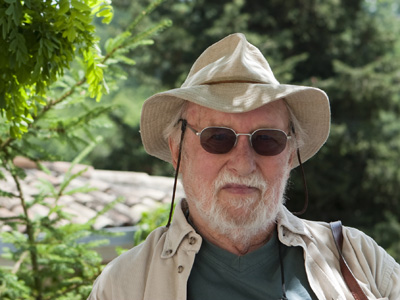 Dr. Sidney Holt
Photo: Tim HoltBy the end of the first week of hearings on the ‘scientific whaling’ case in The Hague that began at the end of June, several excellent commentaries had been posted on the web. I have been encouraged by several correspondents to express my view in the same way. And I am readily doing that now, but with an approach different from that taken by others.

I begin with reference to the interrogation on July 3 of Dr. Lars Walloe - a Norwegian scientist serving as witness on behalf of Japan - by the legal representative of Australia. Walloe was asked whether he had checked any calculations made by Japanese scientists of the necessary sample sizes of killed minke whales needed to test hypotheses about whale populations put forward by the proponents of Japan’s two successive research programmes called JARPA and JARPA II. Walloe said he had, and had satisfied himself that the numbers were scientifically justified, but he was unable to provide his calculations to the court. I believe he never performed such calculations, because the hypotheses to be tested statistically had never been formulated in such a way as to allow rigorous statistical analysis. Furthermore, I do not believe that the Japanese originators of the programmes ever made such calculations – for the same reason.

They did however make other calculations, which did determine the desired ‘sample’ numbers. Those were economic calculations regarding the market for minke whale meat, and the cost of conducting the ‘research programme,’ involving the continued operations in the Antarctic of the one remaining pelagic whaling ‘expedition’ (a term dating from the days when it was pretended that factory-ship whaling was still somehow connected with the great days of Antarctic exploration), mainly fuel, crew costs and ship repairs, maintenance and insurance. The Institute for Cetacean Research (ICR), which was set up in Tokyo for the purpose of conducting the research, was also given a monopoly of marketing the meat produced and, in fact, setting the wholesale price, and underwriting propaganda to boost sales of a product of declining interest to possible consumer – including cookbooks.

It turned out that the initial calculations were not correct, and when the original JARPA was replaced by JARPA II the ‘sample size’ was doubled, not for any statistical reasons but to make a correction to the error in the original economic calculations. But as time passed, it became obvious that the aging factory ship Nisshin Maru would soon need extensive maintenance and repair, even basic changes called for by new rules of the International Maritime Organisation (IMO) for shipping in the Antarctic, such as the type of fuel that must be used. One way to provide the extra funding was to ‘raid’ the large special funds made available – mostly from outside Japan – for the clear-up of damage to property and persons affected by the explosion of the nuclear power installations at Fukuyama, in northern Japan. But there remains the fact that the market demand, at the prices offered, still cannot meet the production of meat – even the much reduced production from the last two seasons, resulting in a growing stockpile of unsold frozen meat – which again contributes to the economic ‘balance’ problem.

Media commentators on these issues almost always express their ‘surprise’ that the products from ‘research’ appear on dinner plates and in restaurants. But there is no need for surprise – without the sale of the meat there would never be ‘research’ on such a scale supported by the government of Japan. In fact that government has never put its own resources on a large scale into serious research on whales and whaling. In earlier years the Japanese delegation to the IWC repeatedly claimed to be providing ‘scientific data’ about the numbers of whales from the activity of the scouting vessels attached to its pelagic whaling expeditions. But the ‘data’ was always made available in a form that the IWC Scientific Committee could not use.

Article VIII of the International Convention for the Regulation of Whaling 1946 (IDCR) requires that whales killed under special permits for scientific purposes “shall so far as practicable be processed and the proceeds shall be dealt with” as determined by the government issuing the permits. It does not require that the products be put into commerce, but neither does it prohibit that. In fact ‘surplus’ whale meat from commercial operations and some special permit catches has quite often be given to schools, hospitals and prisons.

This idea that appeared in the pre-IWC whaling negotiations of 1937, and written into the ICRW in 1946, had a progressive intention – it was against waste. Remember: it comes from a time when whalers used the carcasses of blue and fin whales as fenders between ships, and – inflated – as marker buoys for the floating carcasses of other whales awaiting pick-up to be towed by catcher vessels that had finished their day’s work back to the factory ship.

Japan’s problem - after it had withdrawn its objection to the IWC’s 1982 ‘moratorium’ decision, in the hope of a much more valuable reward from the United States of an indefinite permission for its vessels to fish in the US extended maritime zone – was how to ensure the survival of the complex technology of factory-ship whaling in the Antarctic and the special skills of whalers, especially the gunners on catcher boats. And, of course, to retain some remnants of the once huge market for whale meat within Japan – a nucleus for future re-expansion. Several countries had used, from time to time, special permits catches to ‘top-up,’ commercially unprofitable and so inadequate catches made under normal catch limits.

But Japan had experimented before with the use of special permits for serious expansion of commercial whaling. This was a programme over three years in the late 1970s to kill Bryde’s whales in the Indian Ocean and Northwest Pacific. These whales, being in the tropical and sub-tropical regions where factory-ship pelagic whaling had long been prohibited, would normally be accessible, legally, only to catchers operating from shore stations. Japan’s whaling ‘ambassadors’ had at first sought to establish special shore stations on Madagascar, the Solomon Islands and Indonesia, and also in the Philippines1 – as it had done previously in Brazil, Peru and elsewhere, but without success. So large-scale scientific whaling was born, executed (and I think the brain-child of) Dr. Seiji Ohsumi, a scientist who had long served on Japan’s delegation to the IWC Scientific Committee. I presume his experience in this matter was useful to those who wanted whaling to continue - at any cost except to themselves - in the moratorium period. Ohsumi subsequently was appointed as director of the new ICR.

The Bryde’s whale scam of the 1970s can be seen as a precursor of - indeed a dry run for - the eventual JARPA. By 1979, with the success of the Republic of Seychelles in getting the IWC to declare the entire Indian Ocean as a whale sanctuary, securing the necessary three-fourths vote of members, it was evident that it was only a matter of time – and not a long time – before the IWC would adopt some form of the moratorium proposed by the UN in 1972. The 1979 meeting of the IWC adopted a ban on pelagic whaling by fleets attached to factory ships, and in 1981 adopted a ban on the catching of sperm whales. Years later - in 1994 - the IWC adopted a proposal by France to declare the entire Southern Ocean as a whale sanctuary – again, only Japan opposed this. One reason for the universal support for this was the hope that it might discourage Japan’s ‘scientific whaling’ in the region for 'The Last Whale'2 – but, of course, it didn’t.3, 4

From time to time, there had been (in IWC circles) discussion of whether the proceeds from ‘scientific whales’ (the quaint term created by the distinguished and much admired one-time chairman of the IWC, Ambassador Eduardo Iglesias, of Argentina) should be used specifically to fund scientific research, which is of course expensive, particularly when conducted in the Antarctic by a Northern-hemisphere country. Actually the idea got as far, one year, of being recommended by a small Working Group of the Scientific Committee which was preparing proposals for the first International Decade of Cetacean Research (IDCR), which was declared as part of the then pro-whaling IWC as a counter to a Resolution from the UN Conference on the Human Environment held in Stockholm in 1972, which had resolved (with the sole contrary vote from Japan) to call upon the IWC to declare a ten-year moratorium on all commercial whaling, a resolution endorsed later that year by the UN General Assembly, without recorded dissent.5 The IWC Working Group’s proposal was – bizarrely - to use for the purpose one of the infamous ‘pirate whaling’ ships – the Sierra – that had been providing Bryde’s whale meat from the tropical Atlantic region, to the Japanese market until it was stopped by international action, especially by the government of South Africa closing off port facilities. (The owners of the Sierra were busy in the late 1970s in preparing two factory-catchers to operate in the Indian Ocean for the same purpose. This was a factor in the decision of the Indian Ocean coastal state members of the IWC, to support the proposal to declare that region as a whale sanctuary. It is hardly necessary to say that Seiji Ohsumi was a prominent member of the small IWC-SC Working Group.

So, we see that the device of JARPA-JARPA II to evade IWC regulation of whaling did not arise out of thin air in 1982; it was an advanced stage in a decade-long project of the Japanese authorities and the remnants of their whaling industry to side-step whatever the international community would try to do to ensure the survival and recovery of whales.

In the ICJ case hearing, so far, much attention has been given to whether the whaling under JARPA II is really ‘scientific’ (Japan’s obvious and transparent legal tactic includes trying to conflate JARPA II as an entire research programme with the specifics of lethal sampling as an element of that). There has been much talk about ‘testing hypotheses,’ but I think the lie has been given to all that by the Nisshin Maru’s reaction to harassment by the ships of the Sea Shepherd Conservation Society (SSCS), especially during the 2012-13 whaling season. It fled, followed by one of its catcher boats, to the other side of the Antarctic continent, far from the designated research area – and resumed the taking of minke whales there! A real research programme of course requires systematic, pre-planned sampling in a designated region, over a designated time. Reference to Sea Shepherd’s activities is a bit of a no-no in polite international society, but the Japanese presentations to the ICJ made extensive reference to these – including ‘photoshopped images’ –so I think it’s legitimate for me to cite them here. (My friends involved in all this, sitting in The Hague, tell me that the IWC has not yet published the 2012-13 catch data (with locations) so the Australian delegation cannot refer to them – which is a pity, since they provide what is, I think, the most conclusive evidence that the lethal sampling of minke whales under JARPA II has nothing to do with planned ‘science’.