Murder Most Foul in the Faroe Islands

The Serial Killers of the Danish Faroe Islands have murdered 536 Long Finned Pilot Whales and 7 Atlantic White Sided Dolphins so far in 2019.

Why do I call this murder?

First the slaughter is actually called the Grindadráp. In old Nordic this literally translates as the murder of pilot whales. The old Nordic word dráp means murder. It is not used today and the modern Nordic word for murder is morð.

Secondly dolphins and whales are highly intelligent, socially complex, self-aware, sentient living beings. It is my considered opinion that killing a cetacean is an act of murder. Not homicide, but cetacide.

The killings in the Faroe Islands are brutal. The pilot whales or dolphins are driven onto beaches after long chases that are extremely stressful. They are killed with knives and lances and contrary to the ridiculous claims that the whales die within seconds, the fact is, and we have observed this each and every time, the slaughter is gruesomely long and the cetaceans suffer horrendously, thrashing, screaming, convulsing with their hot blood spurting from the vicious gruesome wounds into the cold sea. They die in agony, hearing the painful screams and smelling and tasting the blood of their family members. Mothers seeing their calves slain, pregnant females desperate to escape and many dying while fruitlessly trying to help others to escape.

The Faroese ask why do we call them barbarians? To anyone who has witnessed this slaughter, the answer is simple. Because the slaughter is barbaric. We have seen the crazed looks and heard the laughing as the killers gleefully plunge their lances and knives into the defenseless bodies of their victims. It is savage, cruel and the animals suffer an agonizing death.

The Faroese call this a tradition but humanity needs to evolve from traditions that torture and kill. The Vikings once sacrificed human beings to their gods. That was a tradition. 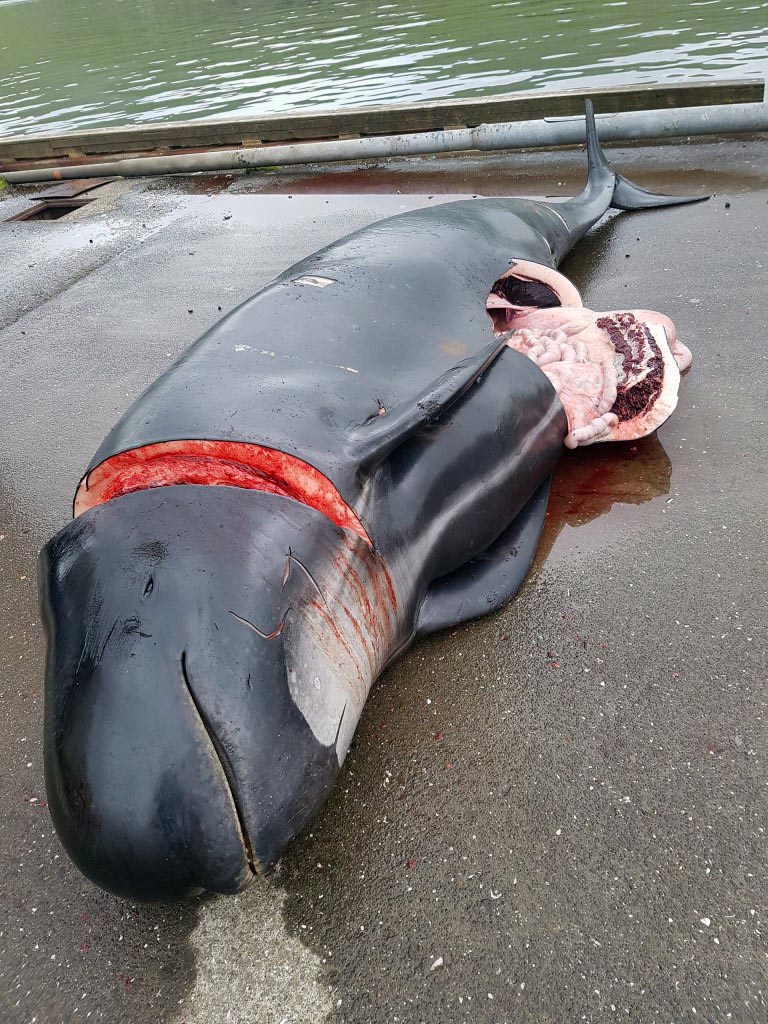 Many Faroese claim that they must do this for subsistence. That claim is laughingly false. The Faroese have one of the highest per capita incomes on the planet. Anything you can buy in a supermarket in Copenhagen, you can purchase in the Faroe Islands and they have the money to do so. There is no homelessness or poverty in the Faroe Islands.

Why is it that even in the Faroe Islands, you can’t sell pork, beef, or chicken if tainted with heavy metal toxins, yet meat, highly contaminated with methyl-mercury is allowed to be fed to children.

These excessively high contaminant levels have been documented in the area of the Faroe Islands (Dam and Bloch 2000, Nielsen et al. 2000, Sonne et al. 2010). The meat is  considered a health hazard for human consumption. (Simmonds et al. 1994).

The Faroese say that pilot whales are abundant and there is no danger of them going extinct. There is no scientific evidence to back this position. On the contrary, the International Union for the Conservation of Nature states that the current population of Long Finned pilot whales in the North Atlantic is unknown. The Long-finned Pilot Whale is listed on the IUCN Red List as Data Deficient  and the species remains data-poor As such the precautionary principle should apply.

The IUCN notes however, the large takes in the Faroes that have occurred over many centuries may well have caused a significant reduction in abundance that has gone undetected in this highly social and wide-ranging species.

The other species regularly slaughtered slaughtered in the Faroe Islands is the Atlantic White Sided dolphin. The IUCN lists the population as unknown.

Sea Shepherd has opposed the Grindadráp since 1983. We have sent numerous ships and sponsored numerous ground campaigns for decades and we will continue to do so. It took three decades for us to realize the banning of seal products from Canada in Europe. It took fifteen years to drive the Japanese whale poachers from the Southern Ocean. These campaigns require both patience and determination and Sea Shepherd has demonstrated to ability to be extremely patient and unwaveringly determined in our opposition to the abuse and destruction of marine species.

Why do we oppose the Grindadráp? We do so in order to defend and protect the species. We do so because it is an excessively cruel and grossly inhumane slaughter. We do so because we are ecologically aware and compassionate towards these incredibly unique and wondrous sentient beings.