Did you give up eating fish for “Plastic Free July”? Chances are you probably didn’t, because no one told you the truth about where most of the plastic in our oceans comes from, and how our meal choices have contributed to it. 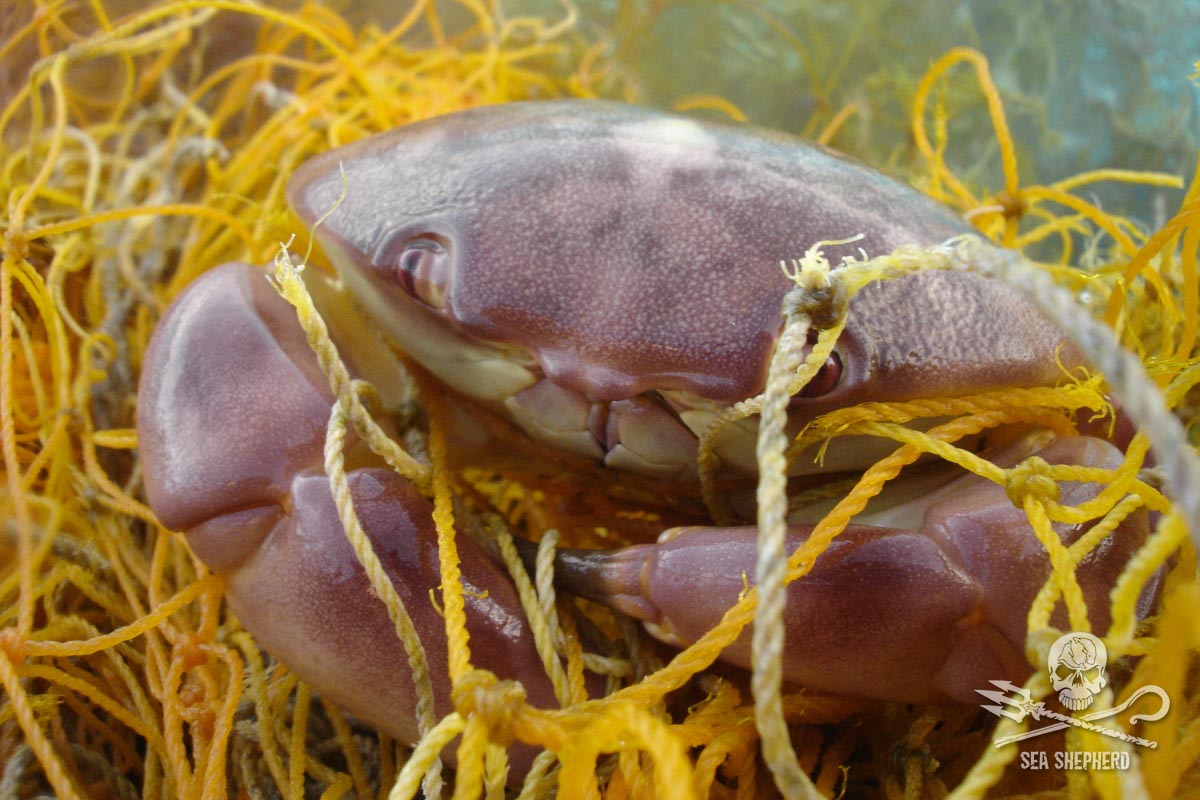 Plastic marine debris is choking our oceans and their inhabitants. Photo by Susie Holst

This July, we were all reminded about the same messages we’ve already heard: invest in reusable water bottles and coffee mugs, swap out plastic shopping bags for a cloth “bag for life”, and refuse single-use plastics, especially straws. The list goes on.

Of course, all of these efforts are worthwhile to incorporate into your daily lives. Plastic waste is clearly one of the most pressing – and visible – issues affecting our oceans and marine wildlife. Humans produce so much plastic each year that it weighs as much as the entire human race combined. And, despite our best efforts to “refuse, reduce, reuse, and recycle,” 91% of plastic waste never gets recycled.

Instead of decomposing or biodegrading as many claim, plastics in the ocean in fact break up into smaller and smaller pieces, eventually becoming microplastics so small the human eye can no longer see. There is no "away" with plastic; every piece of plastic ever produced is still on the planet today. More than 90% of seabirds have plastic in their guts, and researchers are predicting the ocean will contain more plastic than fish in weight by 2050 unless we act now.

But despite what most people think, common consumer plastics like cotton ear buds, throwaway cutlery, and shampoo bottles aren’t actually the biggest culprits.

The single biggest single source of plastic choking out the life in our oceans is made up of purposefully or accidentally lost, discarded, or abandoned fishing nets, ropes, FADs (fish aggregating devices), long lines, and plastic fishing crates and baskets. 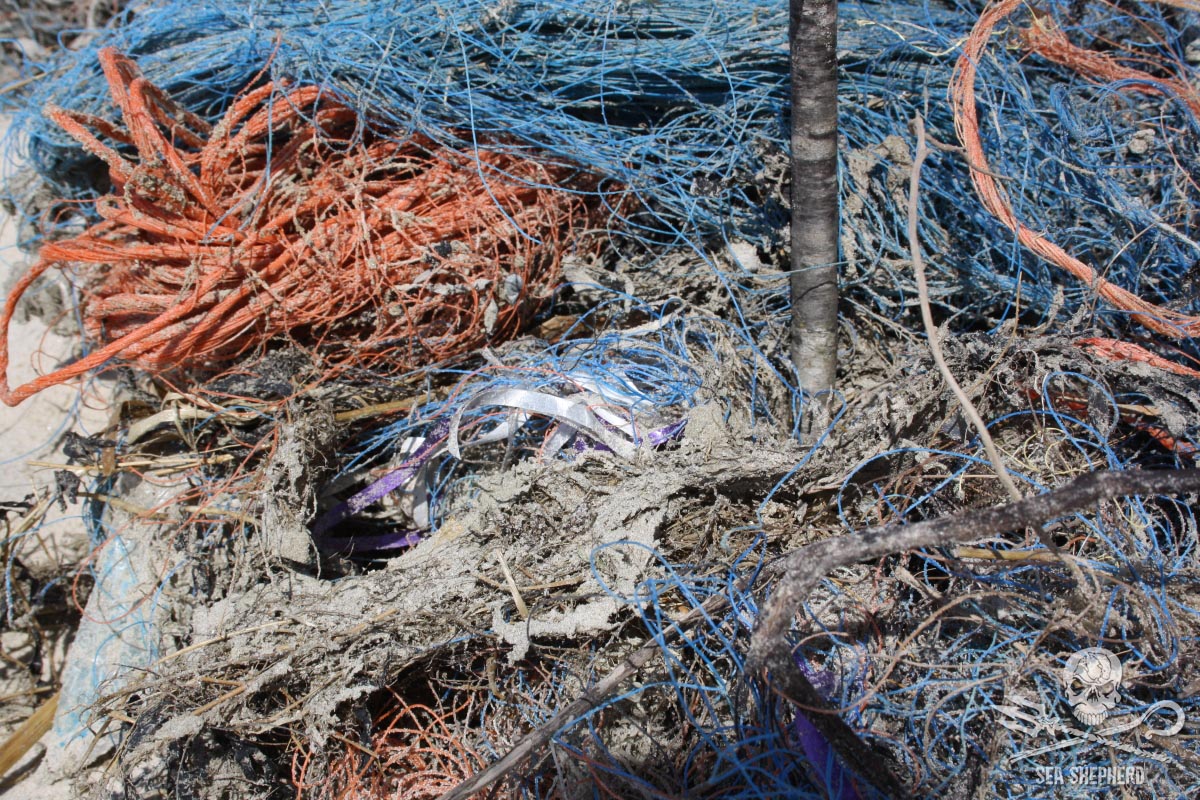 “At least half of [...ocean plastic waste] is not consumer plastics, which are central to much of the current debate, but fishing gear,” states George Leonard, chief scientist at the Ocean Conservancy.

Approximately 46% of the 79 thousand tons of ocean plastic in the Great Pacific Garbage Patch is made up of fishing nets, some as large as football fields, according to the study published in March 2018 in Scientific Reports, which shocked the researchers themselves who expected the percentage to be closer to 20%.

Fishing nets lost, abandoned or discarded at sea – also known as “ghost nets” – can continue killing indiscriminately for decades and decades, entangling or suffocating countless fish, sharks, whales, dolphins, sea turtles, seals and marine birds every year. An estimated 30% percent of the decline in some fish populations is a result of discarded fishing equipment, while more than 70% of marine animal entanglements involve abandoned plastic fishing nets. 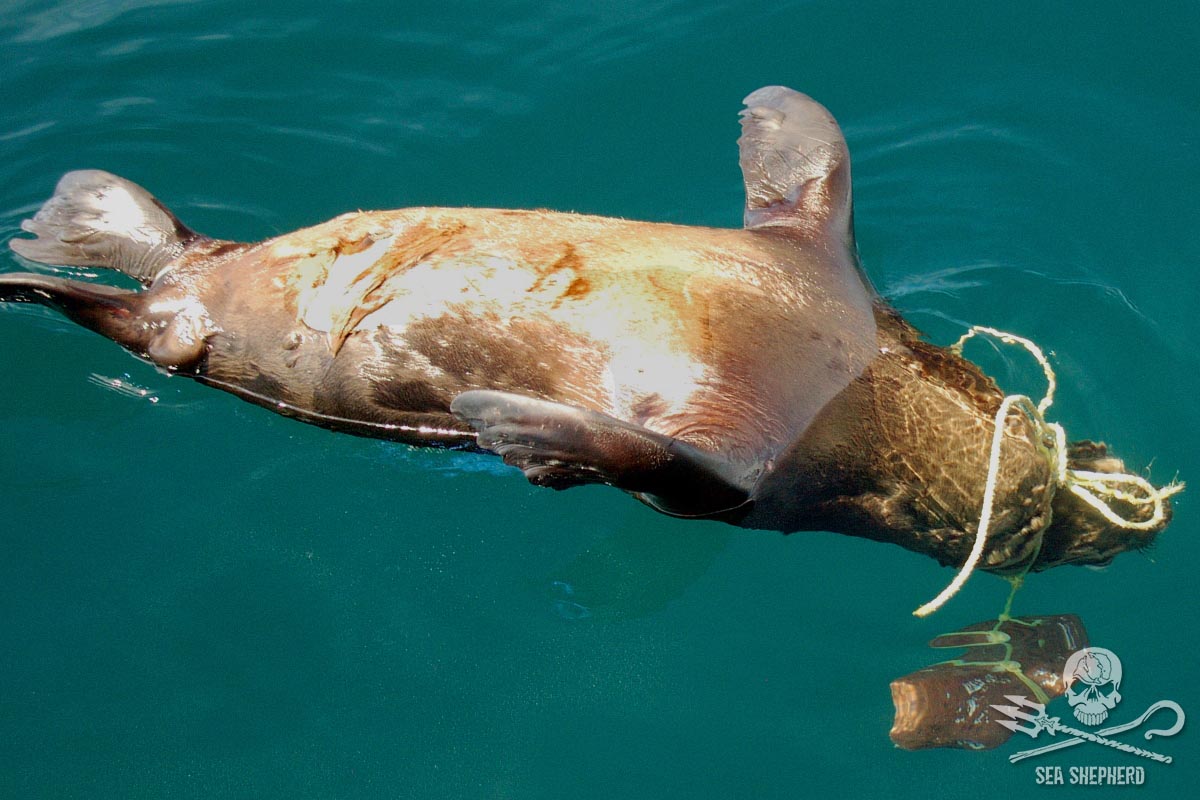 Sea Shepherd crew and volunteers on campaigns around the world are daily witnesses to the devastation caused by this fishing gear. On Operation Icefish in 2014, while Sea Shepherd’s Bob Barker chased down the notorious toothfish poaching vessel Thunder for 110 days until they scuttled their own vessel, the crew of the Sam Simon stayed behind in the freezing Southern Ocean, spending weeks hauling in the 72km-long gillnet abandoned by poachers as they fled. On five consecutive campaigns for Operation Milagro in the Sea of Cortez, our crew retrieved over 180km of ghost nets in addition to the illegal fishing nets responsible for killing the critically endangered vaquita porpoise. In 2015 Sea Shepherd France launched Operation Mare Nostrum to remove ghost nets from the Mediterranean Sea, where they even recovered an abandoned trawling net in a protected marine area just off the coast of France where all fishing is prohibited. Last year Sea Shepherd UK launched Operation Ghostnet, an ongoing campaign using small fast boats and divers to remove hazardous ghost nets and other abandoned fishing gear from coastal areas around England, Scotland, and Wales. Operation Siso, Sea Shepherd’s campaign to confiscate illegal fishing gear found off Italy’s Mediterranean coast, was named for the young sperm whale whose migration past the Aeolian Islands ended when he became entangled in a driftnet and died. In August last year, around 300 endangered sea turtles were discovered dead off Mexico’s southern coast, trapped in a single abandoned fishing net.

Sea turtles are doubly affected by abandoned fishing gear because when it washes up on their nesting beaches the mother turtles get trapped when coming to lay their eggs, and their babies can’t climb over the debris to reach the sea once they hatch. Sea Shepherd’s Bob Barker recently helped clear over four tons of marine debris from a remote West African island in Cabo Verde, the third most important nesting beach in the world for loggerhead turtles.

What Can You Do to Take Action?

Your generous donations help Sea Shepherd continue these vital campaigns to remove this deadly fishing gear from our oceans. You can also participate in beach clean-ups (Important note: never try and retrieve abandoned fishing gear from the water yourself, it can be extremely dangerous for you and even harmful for the wildlife trapped in it; alert your local authorities if you spot one).

But wouldn’t it be better to stop this industrial fishing gear from polluting our waters in the first place? We’re working to stop plastic bottles from reaching the waters by finding alternatives and reducing plastic bags by banning them at the supermarket checkout. So how do we stop the flood of abandoned fishing gear in our oceans? Is there really any other way to stop fishing gear from suffocating our seas than by stopping it at the source? Governments can (and should) take all kinds of measures to prevent fishing gear from further polluting the oceans, and Sea Shepherd will continue to hunt down and help stop illegal fishing operations while pulling up illegal fishing gear wherever we encounter it. But each and every consumer has the power to make a difference.

The UK’s Guardian newspaper recently noted the hypocrisy in media condemnation of single-use plastic while “the most important factor… we talk about least.” Is this silence due to mainstream media not wanting to upset the economic interests of the commercial fishing industry, or because by addressing the issue it means consumers will connect the dots…back to themselves?

Is there really a better way of cutting down the demand for fish – and the massive industry it supports – than by reducing or completing cutting fish from our diets? It might be hard to discuss, it might feel like you’re swimming upstream, but it may be the best way for each individual to make the most impact in addition to avoiding single-use plastics. If we really care about the problem of plastic in the oceans, we need to address the issue of fishing gear. And until we come up with better options, that means dropping fish from the menu.