Meeting the Descendants of Moby Dick 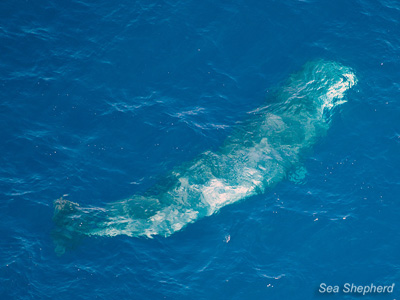 My heart literally soared with joy when I saw those majestic gentle giants swimming free and unmolested in the sea.

Years ago when I looked into the eye of a dying Sperm,
I felt that the great whale had ordained for me a lifelong path,
Some forty years later my passion for the whales remains firm,
Patience and persistence have allowed me to stifle my wrath.

It was the eye of a dying Sperm whale that put me on the path of defending whales. That was in 1975.  I declared then that I would dedicate my life to protecting whales and marine species. I continue to do so and will continue to do so for the remaining years of my life.

As our crew flew over the whales, the lead bull turned on his side and looked straight up at the Sea Shepherd helicopter. Once again the eye of a whale spoke to us, inspired us, and gave us strength. The sight of these wondrous whales swimming freely in the sea gives meaning to all of our actions over the last four decades.

The whales are the minds in the water, the great armless Buddha’s of the ocean. Every time I see them alive and swimming, I am reminded of why we do what we do, and that the risks we take are worth the effort.

For generations humans have slaughtered whales. Motivated by our lust for money, we have murdered millions of them. We have massacred them for oil, for women’s skirts, for meat, for fat to manufacture explosives to kill other humans and more whales. We have rendered Spermaceti oil into lubricants for intercontinental ballistic missiles, slaying the minds in the water for the purpose of exterminating the lives of our own kind.

It is this insanity by humanity that we oppose.

It has been my lifelong ambition to eradicate whaling from our oceans. I wish to see whaling go the way of slavery. It must be totally and forever abolished. It is a cruelty that has no place within the 21st century and no place in the hearts of humankind.

These magnificent, socially complex, intelligent sentient beings have the largest brains of any animal on the planet. They think. They feel. They love. They suffer at our hands. There is so much we can learn from them. We need not quest through space looking for intelligent life when we have possibilities here on our own home planet that we have not even begun to explore.

Yesterday we saw the Sperm whales and today we had Humpbacks swimming by the ship. I wish that the people who kill the great whales could experience the joy of swimming with them and of hearing their songs. 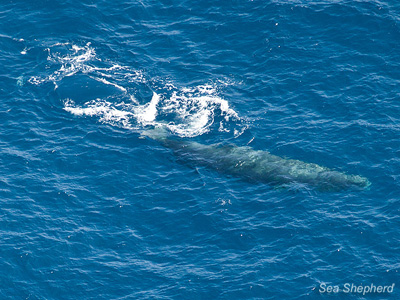 Understanding, wisdom and harmony.
Living intelligently throughout their aquatic span,
Living peacefully with each other.
Would that humans could have such harmony,
And live so intelligently upon the land,
Sister with sister, brother with brother.

If only humans could communicate with such clarity,
Weaving music into comprehension and visions,
Dialects not dividing, joining in unity,
A sub-maritime realm of crystal clarity,
Many families, species and no divisions,
A dream never realized by hominid community.

There is no song on Earth like that of the Blue Whale.
Low vibrations around twenty hertz, rumbling,
Songs that penetrate each other’s very souls
One hundred and twenty decibel wail,
Through hundreds of nautical miles tumbling,
Sounds that lap like music against remote shoals.

Humpback whales sing songs that change over time.
Whales exchanging lyrics and tone,
Songs with purity beyond human refining,
Voices beyond grammar, syntax or rhyme,
From the abyss a doleful moan,
Stories designed for Cetacean binding.

A language of ethereal music
Speaking in cadences and notes,
Modulating sounds and clear themes
So perfect and to us mystic
The siren’s song heard through the hull of boats.
An exotic song haunting sailor’s dreams.

To hear their songs beneath the waves is an experience not to be forgotten. As the pod of Sperm whales approached, Second Officer Beck Straussner from Hawaii found himself directly in their path. He saw them approach and heard their thundering subaquatic voices. He heard their songs, their words, and felt their presence.

Beck was once a trainer at Sea World. He left when he realized that keeping these great creatures in captivity was wrong and not once did he ever find an experience of a whale or dolphin in captivity to equal the experiences he has found in the wild.

“This is where these incredible animals belong, swimming free in the sea, not in small tanks for our amusement and not on someone’s plate,” he said when he returned to the deck of the Steve Irwin. 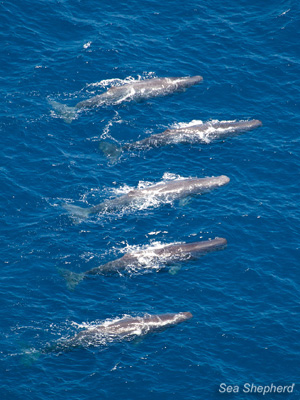