When it comes to effective shark cull alternatives, there is a lot we can do 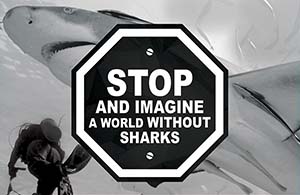 If you were to listen to the Western Australian Government, they would have you believe that there is little that can be done to protect ocean users from the very rare chance of an unwanted shark encounter except for killing protected and vulnerable sharks. However, Sea Shepherd has compiled a poster that outlines that there is in fact many ways that ocean users can be protected, without resorting to lethal measures, and these are available options right now.

The list can be broken down into four main areas; education, patrols, barriers and personal protective equipment. Sea Shepherd is not endorsing any particular product, but is simply pointing out that there are measures that are available right now to lower the already low risk of a shark bite.

Tagging sharks has provided scientists with information regarding the behavior of shark species, which could be used by state governments to educate people on any hot spots where sharks are known to congregate at certain times of the year. For example when snapper are spawning off Warnbro Sound, WA in December, there are white sharks around. Unfortunately the Western Australian Government recently misused the tagging information in order to instigate a catch and kill order, which frustrated those involved in the tagging and research projects to the point they now have reservations with sharing tagging information. If we are to learn further about the habits and behaviors of sharks in order to better protect ocean users, then tagging and tracking them is one way this can be done.

Tagging and towing sharks out to deeper waters has also proven to be very successful and again has scientific backing. The initiative was trialed in Brazil, where it reduced shark incidents by 97% with minimal environmental impact.

Other educative tools currently available include Government websites and applications such as the Sharksmart websites in WA and NSW and shark sighting information available through Surf Life Saving WA on Twitter and through iKoast.

A world without sharks is a very scary prospect (Click to enlarge)Surf Life Saving uses aerial patrols within WA, NSW, QLD and SA. In addition to these patrols, there are unmanned aerial devices or drones are being trialed in QLD while Osprey have developed a blimp which uses a camera system to spot sharks and SciFly have developed specialised cameras using digital technology to spot sharks.

Surf Life Saving also undertake land patrols as part of their surveillance, however in Cape Town in South Africa, a decade-old shark spotting program dedicated purely on sharks, uses a system of flags and alarms to alert people of shark sightings.

Another patrol system being recently promoted is the Clever Buoy which uses sonar to detect shark movements and then alerts life savers to the fact that a shark has been detected.

In the 1930’s in New South Wales, shark nets were installed. Similar nets were then installed in the 1960’s in Queensland. These nets are not barriers or enclosures and are definitely not eco-friendly, with large amounts of marine animals trapped within these nets annually, including seals, dugongs, turtles, dolphins, rays and even whales.

However, prior to the installation of these nets, ocean pools were installed at particular beaches, which are extremely popular on the East Coast of Australia and are starting to make a comeback in Western Australia.

The 21st century has seen new barriers being trailed and tested, including the Eco Shark Barrier currently installed at Coogee Beach in Perth, Western Australia, the Shark Safe Barrier being successfully trialed in South Africa and the Bionic Barrier

Currently available on the market in terms of personal protective equipment to reduce unwanted shark interactions are specifically designed shark deterrent wetsuits and surfboards. Furthermore, ocean users have options to take advantage of electronic deterrents such as the Shark Shield and SurfSafe which is a product exclusively for surfers. A new product that has recently been released in Australia is SharkBanz, which uses magnetic technology to deter sharks.

These are just the products that are available right now. Research is being undertaken on a range of other technology including masking devices of swimmer sounds, chemical repellants, bubble curtains, underwater noises and strobe lights.

So with all this available, why aren’t governments moving away from in-effective lethal methods in favor of non-lethal measures to protect humans from unwanted shark encounters? 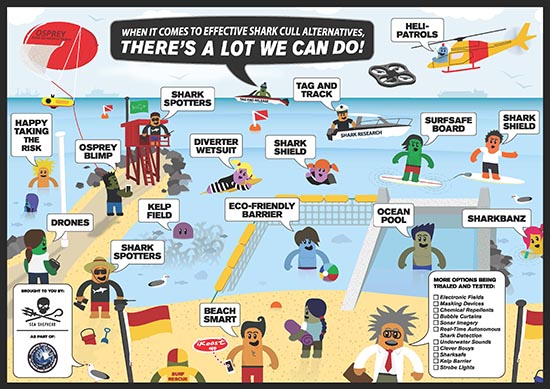 There are many shark safety solutions now available (click to enlarge)