Letter To the Editor of DIVER magazine

In reply to the article ‘Away from the Grind’ by journalist Jo Caird in the February 2016 edition of DIVER magazine:

Letter To the Editor of DIVER magazine: 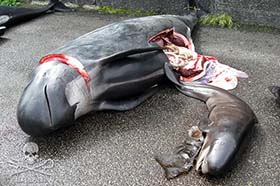 Killed Pilot whale mother and calf in 2010. Photo: Sea ShepherdJo Caird went diving with the only dive centre in the Faroe Islands which (since the dive-master ‘Janus’ does not own a boat) use a co-owned fishing boat used also to drive in pods of Pilot Whales in the grindadrap hunts. This is (arguably in many people’s minds) little different to going 'whale watching on a whaling boat'. Just because there is not a harpoon being fired it does not change the fact that the boat is also used to hunt whales. In the case of this boat used by the Faroese dive centre - it used to harass and drive ashore entire pods of pilot whales which are then slaughtered on any one of the 23 killing bays around the islands which includes a bay at Klaksvik. Tragically grindadrap hunts spare not a single member of the pod they target, the entire family of pilot whales is killed including pregnant females and juveniles.

Jo Caird states in the article 'While critics of the grind denounce it as a brutal abuse of animal rights, unjustifiable in this age of economic prosperity and readily available protein” - The grind (actually the hunt is called the grindadrap as 'grind' is the name the Faroese use for Pilot whales) is indeed an abuse of animal rights and is anything but humane. In the European Union, including in the Kingdom of Denmark (which owns the Faroe Islands) it is not only illegal to kill Pilot whales but it is even illegal to harass any whales or small cetaceans. The grindadrap hunts drive a pod of Pilot whales using RIBs, fishing boats, jet-skis and anything other watercraft they have available using a 'wall of sound' to force the pod into a designated killing bay and right up onto the beach or rocks where they can be killed by hand by waiting Faroese men.  The drive itself causes the whales considerable stress and the manner of the killing is certainly not humane and would not be considered in any European slaughterhouse. There is no need at all for the Faroese to kill pilot whales as they have one of the highest standards of living in Europe and access to all the foods we have imported from all over the world in their stores (you can even buy Python meat, Buffalo, watermelon and papaya in Torshavn). In fact the Faroese know very well (from their chief medical officer and studies over the past decade) that the Pilot whale meat and blubber is heavily contaminated with mercury, other heavy metals and PCBs bio-accumulated over the whales lifetime as they are apex predators from the industrial pollution within the Atlantic ocean ecosystem.

Jo Caird goes on to say that “defenders cite it's importance in Faroese culinary and social history, as well as its role in community cohesion" - As for continuing such a needless and inhumane hunt to maintain a Faroese sense of 'social history'...if we all used that excuse to continue 'traditions' then cannibalism, bear baiting, cock fighting and many other historical barbaric pursuits would never have been consigned to the pages of history over previous centuries. If the Faroese also think they need to maintain the killing of hundreds of pilot whales each year to maintain 'community cohesion' then the Faroe Islands government need to take a long hard look at what is going wrong in their communities. 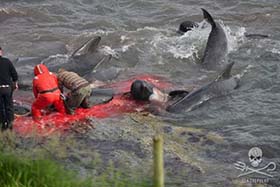 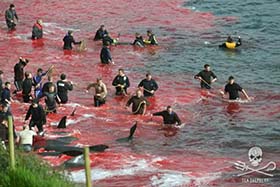 The article also states that the slaughter is not commercial…which is not entirely true. Yes it is true that much of the pilot whale meat and blubber is divided up amongst those who take part in the hunt and then divided up to the local community. However, pilot whale meat and blubber is also sold in some Faroese stores, the market at Torshavn harbour and tourists can purchase and eat Pilot whale at establishments such as the Hotel Hafnia in Tórshavn, the Marco Polo restaurant, KOKS restaurant and many more…including occasionally at the Sjoemansheim hotal in Klaksvik itself.

Journalist Jo Caird states in the DIVER magazine article: “Long finned pilot whales are not endangered and the harvest, averaging out at 850 per year, is ‘sustainable’, according to the Convention on the Conservation of Migratory Species of Wild Animals”.

This statement is entirely false as Jo Caird would have discovered if she had fact-checked this with ASCOBANS / Conservation of Migratory Species of Wild Animals (CMS) convention secretariat staff (same offices). Faroese whale hunts are NOT designated ‘sustainable’ under ASCOBANS due both to lack of accurate pilot whale population data and the ocean areas covered by the treaty in regards to Appendix II species. The grindadrap has not been declared 'sustainable' by the CMS for the same reasons as confirmed again on the 28th January 2016 by the ASCOBANS coordinator & CMS Marine Mammals Officer based in Bonn, Germany who speaks perfect English and is just a phone call away.

Jo Caird repeats the Faroese claims that the Pilot whales “are killed quickly once they have been driven up onto the beach”. The truth is the kill is rarely as quick as Faroese propaganda makes out. Pilot whales are large animals, often have to be dragged ashore with a blásturongul (a type of blunt gaff hook in the whales blowhole) and even with the modern technique of severing the whales spinal cords with a mønustingari (a modified knife used in attempts to sever the spinal cord) before a grindaknívur (traditional grind hunt knife) is used to cut the whales neck - it is difficult to get a clean, quick kill as so often videos of such hunts demonstrate.

The killing can turn into long drawn out disorganised massacres. At Klaksvik was the site of the infamous grindadrap on the 19th July 2010 - a hunt which went horribly wrong even by Faroese standards. During that ‘grind’ a total of 228 Pilot whales were driven onto a beach only large enough for 100 whales and there were far too few men waiting to kill them. The Pilot whales were left thrashing around on the beach, on rocks and everywhere in the bay. The killing took far too long with immense suffering for the whales. It is no wonder then that local Councillors in Wick (Caithness, Scotland) are attempting as I write this to cancel the twinning relationship between their whale friendly Scottish town and Klaksvik.

Before eventually going back onto the subject of diving in the Faroe Islands, Jo Caird writes “If the whales were endangered, or if the hunt took place for sport rather than sustenance, that would be another matter – but with the situation as it stands, I’m not going to condemn a practice that brings communities together and dates back 1000 years”. I would hope that the Jo Caird and anyone reading this watches some of the gruesome videos of grindadrap hunts on YouTube, Vimeo or the images available on the web for all to view via your search engines and decide if these hunts look like a quaint subsistence hunt…or a sport for the young men of the Faroe Islands. Sea Shepherd volunteers have unfortunately witnessed the ‘sport’ side of the grindadrap, when a grind is called there is a buzz of excitement, lots of people rushing to the killing bay, there is cheering and laughter and lots of hand shaking and congratulations.  There is no denying that this is a sport with a festival like atmosphere for particularly the younger Faroese men often seen smiling and posing for photographs while drenched in the blood of the whales they have killed. 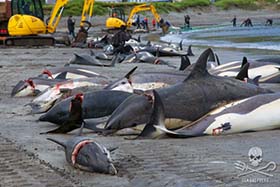 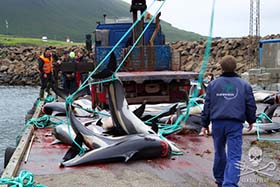 Atlantic White Sided Dolphins at Hvalba in 2013
In 2013 (the last year when there was not a Sea Shepherd campaign in the Faroe islands) the Faroe islanders killed 1104 pilot whales as well as every member of a pod of 430 Atlantic white sided dolphins on the 13th August in a single bay at Hvalba on the southern island of Suduroy. Sea Shepherd campaigns ‘Operation Grindstop’ reduced the kills to 48 pilot whales in 2014 and last year ‘Operation Sleppid Grindini’ reduced the kills to 492 pilot whales even in the face of new Faroese laws protecting the hunts from activists and the interventions of the Danish Navy including the seizure of four Sea Shepherd rigid inflatable boats.

As the Danish food critic Trine Lai rightly points out on her food blog about KOKS restaurant on the Faroe islands: “the pilot whale is in fact not considered human food anymore because it is full of mercury and other heavy metals from the pollution of the Atlantic Ocean, and it is recommended not to eat it more than once or twice a month”. In fact the Faroese chief medical officers Pál Weihe and Høgni Debes Joensen announced in November 2008 that pilot whale meat and blubber contains too much mercury, PCBs and DDT derivatives to be safe for human consumption. That leaves the Grindadrap as a relic of a bygone age - a needless hunt of hundreds of pilot whales and dolphins each year which knowingly poisons the Faroese people, is sanctioned by the Faroese Government, defended by the Kingdom of Denmark and is maintained under a ludicrous arguments of ‘history’ and culture’.

I am grateful to the Editor of DIVER who invited me to reply to this article.  Surely Jo Caird as a professional travel journalist should know to check her facts and to not rely on local and likely biased sources of information.  Of course the Faroese are going to defend the Grindadrap and put a positive spin on it.  In my mind, and in the opinion of Sea Shepherd there can be no justification for such an atrocity against marine wildlife and hopefully those conservation minded divers reading the article with agree. 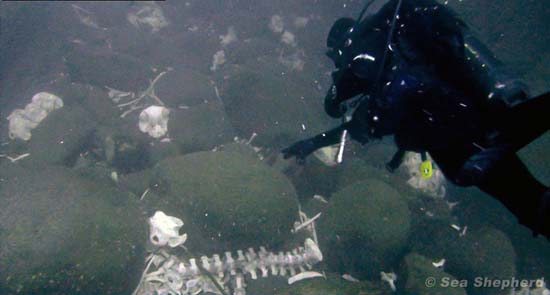 If any readers of the DIVER article do still wish to go diving in the Faroe Islands, I would hope you would take every opportunity to make it known to those you meet that dive tourism would be far more beneficial to the islands than destroying those same small cetaceans which swim past our coastlines and which we love and protect in the UK and EU.

The Sea Shepherd Conservation Society was the first organization to confront the horrific slaughter of pilot whales and dolphins in the Danish Faroe Islands back in 1983. Sea Shepherd returned in 1985 and 1986 with a crew from the BBC to produce the documentary Black Harvest. We returned again in 2000, 2010, 2011, 2014 and 2015. Eight field campaigns, numerous confrontations and thousands of whales saved.

Sea Shepherd never expects quick or overnight victories. Our campaigns in the Faroe Islands have lasted 32 years and these campaigns will continue until the slaughter that the Faroese call the grindadráp (murder of whales) is ended.