Japanese Whaler Welfare Bums Need to Get an Honest Job 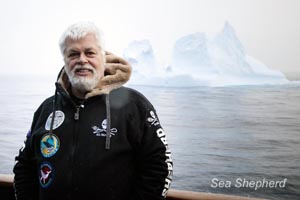 The Japanese government has decided to support the debt-ridden Institute for Cetacean Research (ICR) with tax dollars from Japanese citizens.

It was a scandal last year when the Japanese government allocated some $30 million U.S. from the Tsunami Relief Fund to subsidise the whalers, but now that Sea Shepherd continues to undermine their illicit profits, the whalers need even more subsidies to survive and that means the Japanese taxpayers must foot the bill.

According to an ABC Australia news report, “Some of the money has come from funds set aside for rebuilding communities shattered by the 2011 tsunami and now it appears more cash has come from a new taxpayer-funded subsidy known as the profitable fisheries fund.”

Subsidising something called the “profitable fisheries fund” is confusing to say the least. Whaling is a dead industry and has no place in the 21st Century where whales are worth more in economic terms alive than dead. It also is a strange justification for subsidising a so-called scientific research project. It appears that Japan is no longer even pretending to kill whales for research.

Japanese whaling is now a glorified welfare program that serves only to denigrate Japan’s international reputation and has no hope of returning whaling to a profit making industry.

This is good news. Pride goes before a fall. The annual Canadian seal slaughter was heavily subsidised by the Canadian government yet the industry collapsed under pressure from the conservation and animal welfare and animal rights movements.

So too will the Japanese whaling industry collapse. The market for whale meat has been diminished and all efforts by the ICR and the Japanese government to revive it have failed.

Why is the Japanese government so adamant when it comes to defending whaling?

There are a number of reasons.

1. Amakudari. The term's literal meaning, "descent from heaven". In practice amakudari, is the system whereby senior civil servants retire to join organisations linked with or under the jurisdiction of their ministries or agencies when they reach mandatory retirement age. The former officials may collude with their former colleagues to help their new employers secure government contracts, avoid regulatory inspections and generally secure preferential treatment from the bureaucracy. The bureaucrats running the Institute for Cetacean Research are all former politicians who have been given high paying jobs to head the ICR. If whaling is ended, no ICR and no ICR means no jobs for the recipients of amakudari.

2. The policy of the Japanese Fishery Agency is to not back down on any of their fisheries. Their fear is that if they back down on whaling or the dolphin slaughter they will look weak and that will put more pressure on them to back down on overfishing of Bluefin tuna and other species.

3. The Unions that supply the seaman for the whaling ships are controlled by the Yakuza, the Japanese equivalent of the Mafia. The Yakuza exercise a great deal of influence over some Japanese politicians and bureaucrats.

4. Japanese pride also keeps the government and the whalers from surrendering to outside pressure. In September 2011, the Japanese Prime Minister said that this is no longer about whaling, it is about not surrendering to Sea Shepherd. This is a little absurd because it has Japan treating Sea Shepherd like a nation they are at war with when Sea Shepherd is simply a small non-governmental organisation. In their effort to save face the Japanese government merely makes themselves look ridiculous.

5. Japan is using the whaling voyages to keep their whalers trained. Fin and Humpback whales have not been killed since the late Sixties. Part of the “research” Japan is doing is designed to train harpooners how to kill the larger whales. Japan is concerned that the whalers will lose the skills required to efficiently kill whales.

6. Japan wants to keep an economic foot in the door with regard to Antarctic resources. Japan has no official territorial claims in Antarctica but will be able to present the argument in future negotiations that they have prior economic use of Antarctic resources. So this is about more than whales, it is also about oil, uranium, coal, cobalt and potential exploitation of seals and penguins.

With regard to penguins, back in 1982, Sea Shepherd offered to bring medical supplies to the Falkland Islands for the British government. Our offer was welcomed by Britain but the war was won before we could organise the voyage. The reason for our offer was that Argentina had signed a deal with a Japanese company to provide a million penguin skins for manufacturing ladies gloves. Our support for Britain was because of our concern for the indigenous citizens of the Falklands, the penguins. What this incident indicates is that Japan has been actively looking for ways to exploit Antarctic resources.

What the Japanese should be doing is using some of this money to train the whalers to find a productive job, one that does not need to be supported as a welfare project.

My advice to the whalers is "Get a real job ya bums and stop ripping off the taxpayers."