It’s Time to Go Global With the Gruesome Grindadráp

Evolving Strategies to Address the Crimes of the Danish Faroe Islands, 2016. 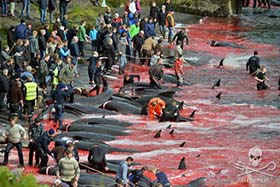 Since 2010, Sea Shepherd has focused international media attention on the grindadráp. Photo: Mayke WendtThe Sea Shepherd Conservation Society was the first organization to confront the horrific slaughter of pilot whales and dolphins in the Danish Faroe Islands. That was back in 1983. We returned in 1985 and 1986 with a crew from the BBC to produce the documentary Black Harvest. We returned again in 2000, 2010, 2011, 2014 and 2015. Eight field campaigns, numerous confrontations and thousands of whales saved from the bloody grind knives of the citizens of the Ferocious Isles.

Sea Shepherd never expects quick or overnight victories. What Sea Shepherd does requires patience, persistence and endurance. Our campaigns in the Faroe Islands have lasted 32 years and these campaigns will continue until the slaughter that the Faroese call the grindadráp (murder of whales) is ended.

An entire generation of Faroese have grown up with the eyes of Sea Shepherd upon them. They have been taught to hate us, to resent us, even to be afraid of us but the one thing that have not been able to do is ignore Sea Shepherd.

Sea Shepherd has been and will continue to be the guardian angels of the dolphins. So much so that when people around the world hear of the Faroe Islands they also hear of Sea Shepherd, as they recall the images of senseless and merciless slaughter that these islands have become notoriously famous for, a reputation they share around the globe with the dolphin killers of Japan.

Sea Shepherd is experienced with long campaigns against stubborn and brutal killers. We’ve fought the savage seal killers of Eastern Canada since 1975 with on ice campaigns in 1976, 1977, 1979, 1981 and 1983 until the slaughter of new born whitecoat seal pups was permanently ended. The slaughter revived again in 1995 and Sea Shepherd returned to the ice in 1995, 1996, 1998, 2005 and 2008 until Europe banned seal products. And now that Canada is trying to promote the market for seal fur in China, once again, we need to return to our campaigns on behalf of the seals with new strategies and tactics.

Sea Shepherd has fought the Japan’s illegal whaling in the Southern Ocean since 2002 and the slaughter of dolphins in Taiji, Japan since 2003. Our campaign to stop poaching in the Galapagos is now entering its 16th year.

Sea Shepherd never gives up and never surrenders, and our only retreats are strategic retreats.

To be effective, strategies must evolve. The opposition must be kept guessing, and once the opposition turns to counter a strategy, the strategy must change.

Since 2010, Sea Shepherd has fielded four field campaigns to the Faroe Islands and in the process we have saved the lives of hundreds of pilot whales and other dolphins, in addition to focusing international media attention on this on-going annual atrocity in the North Atlantic. 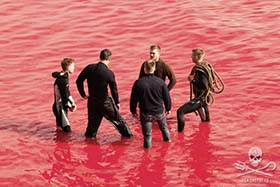 Over the years hundreds of Sea Shepherd volunteers have stood up in opposition to this barbaric massacre. Photo: Eliza MuirheadDuring this time we have captured hundreds of hours of video on the Faroese slaughter of small cetaceans and collected a large volume of evidence on illegal activities by the dolphin killers and the Faroese and Danish governments.

For the year 2016 we will not send our ships back to the Faroe Islands. The ships are urgently needed elsewhere and now is the time to produce a documentary film and to unleash strategies aimed at Danish and Faroese tourism, in addition to pursuing legal channels to expose and prosecute violations of European and international conservation laws.

The loss of a couple of boats (replaced by our loyal support base) and the arrest of a few dozen courageous volunteers has given us some valuable material with which to advance the cetacean cause.

We know that the Faroese and the Danes are worried about what impact the exposure of the savage slaughter will have on tourism. Cruise ships have abandoned their visits and we intend to convince other companies to refrain from doing business with the Faroe Islands. Other targets include Faroese fish products and discouraging the filming of motion pictures in the Faroe Islands. Disney already cancelled filming for a major film. Film companies are well aware of the impact on ticket sales when their production is associated with places that commit atrocities against wildlife and nature.

Over the years hundreds of Sea Shepherd volunteers have passionately and courageously stood up in opposition to this barbaric massacre of such intelligent, self aware, socially complex, sentient beings. This has been and continues to be a global movement of compassionate activism.

The Faroese and Danish position, that the slaughter is traditional and cultural, has absolutely no justification or credibility. There can never be any justification for such savage and senseless slaughter.

The killers glorify suffering and death and Sea Shepherd champions life and the rights of cetaceans to live unmolested and unharmed by humans in the name of some savage and ruthless tradition. 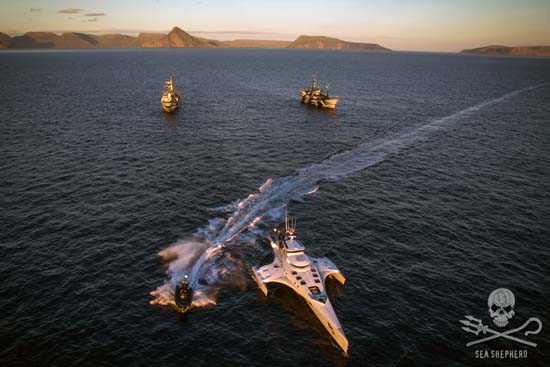 Sea Shepherd will continue to be the guardian angels of the dolphins. Photo: Sea Shepherd