Iceland to Resume the Slaughter of Endangered Fin Whales 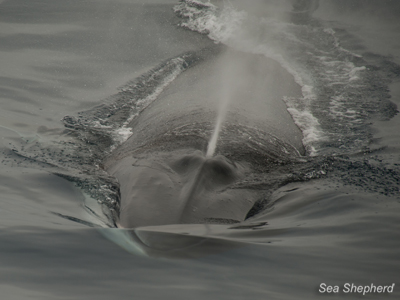 It was one of these magical days at sea. The ship I worked on had left the King Penguin colonies and sea elephant haul-outs of the sub-Antarctic island of South Georgia behind, and we were steaming northeast to another South Atlantic wildlife pearl: Gough Island.

There was no wind at all, very rare in these ‘furious fifties,’ and the sea was flat as a mirror. In these conditions, it is easy to spot wildlife and a blow in the distance spelled big whale. We slowed down and after a while came to a stop as first one, then two and later five fin whales moved in the direction of the ship. They are sometimes seen as a single individual or as a mother and calf couple, but usually they travel in small groups like this one. Where feeding is good, these groups can come together to number over a hundred.

As far as we know, these are the second largest animals ever to have lived on the planet after the blue whale. For the 20-plus meter length and 75-ton weight these pelagic mammals can reach, they are extremely elegant, streamlined and fast. Normally they avoid ships or are indifferent to them, but sometimes they will race vessels, smashing into waves on a parallel course at a safe distance.

They reach speeds up to 40-kilometers-per-hour and can easily outrun my ship. This speed enabled them to avoid the mass extermination that befell the slower right whale species until the advent of steam, and later, diesel engines, the invention of the explosive harpoon and the introduction of factory ships.

When they arrive in the south in spring, or in the north in the northern hemisphere, they concentrate on only one thing and that’s eating. They gorge on the krill and schooling fish of the Southern (and Arctic) Ocean after mating and calving in their unknown breeding grounds. They eat by gulping in large swarms of prey, their throat pouch expanding until the water is pressed out through the baleens.

Now at the end of the season and on their way north again, escaping the relentless Antarctic winter, they were fat and happy and apparently, that made them inquisitive.

Up to 184 Fin Whales may be taken in this year's hunt
Photo: Erwin Vermeulen / Sea Shepherd

What they did this day I’ve never seen them do before. They slowly circled the ship, again and again, every now and then turning a little on their sides, showing either the left grey-black side of their heads or their right side with the distinctive pale-white lower jaw and staring up from just under the surface at these little, elated, cheering creatures hanging over the railing. Everybody who has stared back into these eyes will tell you the same - they speak of intelligence and curiosity.

Every time I encounter cetaceans in this manner, two thoughts pop into my mind: the first one, likely some genetic remnant of the ancient hunter, thinks how easy it would it be to kill them like this. And immediately the second one, maybe the voice of compassion, reason and civilization thinks “who could kill a beautiful, majestic, sentient being like this.”

We all know who.

Greenland has an International Whaling Commission (IWC) quota of 19 fin whales, the North Atlantic subspecies, per year. Greenland wanted to increase their ‘large whale’ quota, but this was refused, because investigations showed that whale meat was freely sold in over a hundred stores in Greenland and was served in tourist restaurants as ‘whale barbeque’ or ‘Greenland sushi.’ Greenland kills whales under an aboriginal permit that demands that all the products from the killed whales must be used for the subsistence of the original human population. The Greenlanders however went commercial with whale meat even making it available in Denmark shops.

Earlier this year, Greenland did what all the whale poachers of the world do when they disagree with the IWC - they ignored this impotent body’s decision and set their own quota - but they kept their fin whale take at 19.

The present day mass murderer when it comes to fin whales is Iceland. Commercial whaling was discontinued in Iceland in 1986 when the IWC moratorium came into effect, but they used the familiar so-called scientific whaling excuse until 1989. Most of that catch was used as feed on fur farms in Iceland. In 1992, Iceland left the IWC, but could not resume whaling as IWC member Japan was not allowed to import whale meat from a non-member. They rejoined in 2002 with a reservation to the moratorium. In 2009, they set their own quota at 154 fin whales per year. That year, they caught 125 of these animals; 148 a year later.

In 2012, Iceland decided for the second consecutive year not to kill fin whales. In 2011, there was no demand for whale meat in Japan as a result of the earthquake and tsunami occurring in March of that year. The earthquake reportedly damaged two of the whale meat processing plants with which the Icelanders do business. Business? Yes! Where the appetite for Minke whale meat is small in Iceland, the market for fin whale meat is non-existent. The hunt is only pursued for the export profit from Japan, a glorified subsidizing scheme as Japan’s warehouses are full of unsold whale meat, but that nation fears the day that they are the last slaughterers of whales on the planet.

In 2012, according to Icelandic media reports, Icelandic whale butcher Kristjan Loftsson and CEO of the Hvalur Company, could not come to an agreement with the fisheries union about salaries and working conditions. The fact that the consumer interest in whale meat in Japan is dwindling, and therefore disappearing profits, played a role as well.

However, in early May, Loftsson announced in an Icelandic newspaper that the fin whales would be prosecuted anew this year. The hunt is expected to start in June and run through September. To the former quota of 154, another 20 percent of last year’s unused quota can be added, so that means that 184 Fin Whales could end up dead. Two boats will be used to hunt and then tow harpooned whales to the whaling station at Hvalfjordur.

A reason to restart this much despised and even economically unsound venture might be that after 2013, when Hvalur’s five-year permit expires. "Most of this year's whale meat would be exported to Japan - things are improving there...everything is recovering," Loftsson said. Loftsson is known for big mouthing in the press and later backing down citing varying excuses. In Iceland, Minke whale meat is for sale in stores and restaurants all over Reykjavic....even in a Mexican restaurant that also bizarrely serves puffin meat (puffin is also advertised in restaurants all over Reykjavic). There is no sign at all of fin whale meat or products for sale in Reykjavic. Loftsson is powering his whaling ships using ‘biofuel’ composed of 80 percent diesel and 20 percent whale oil. Loftsson claims the oil is "additionally friendly to the environment" as it is rendered out of whale blubber using heat from Iceland's volcanic vents.

However, preparations are ongoing - two vessels, Hvalur 8 & Hvalur 9, are being prepared for the hunt (with 5-6 people working on Hvalur 9). Hvalur 9 seems to be in better condition than Hvalur 8, but both were being worked on. They are tied up with six-tensioned steel mooring lines on each vessel with signs claiming the vessels are protected by Securitas, an international security firm, with others warning of CCTV monitoring. Neither vessel had their harpoon guns fitted, but the deck mountings were clean and protected by canvas covers. Hvalur 6 & Hvalur 7 are being repainted in a stone banked enclosure in Hvalfjorour. They were towed from Reykjavik to Hvalfjorour last year and are thought to still be inoperable, not much more than floating museum exhibits.

If they go ahead, it will be interesting to see if the U.S. backs up their condemnation of Icelandic fin whaling with economic sanctions as made possible by the Pelly Amendment and if the European Union will follow suit.

A young child holds their nose as the processing of whales goes on
Photo courtesy of www.goecco.com