I Am Proud to Wear Sea Shepherd Garb

Commentary by Scott West, Director of Intelligence and Investigations 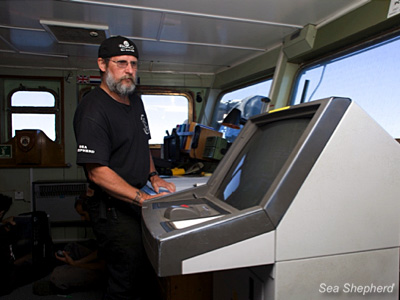 Scott West onboard the SSS Steve Irwin
during Operation Waltzing Matilda in 2009
Photo: Sea ShepherdAnd why shouldn’t I be.  Sea Shepherd is the strongest now that it has ever been.  At first blush it may not look that way however.  Sea Shepherd is being hounded by lawsuits and the ships of Sea Shepherd Netherlands and Australia have suffered heavy damage in the Southern Ocean.  The lawsuits and the recent desperate acts of cowardly men on the illegal Japanese whaling ships of the ICR are proof that we are the strongest we have ever been.  Who would spend extravagant resources on lawsuits or elicit worldwide condemnation unless we were having a serious impact on their illegal activities?

Currently, Sea Shepherd United States (SSCS US) is under an injunction from the Ninth Circuit.  The injunction says that SSCS US cannot approach the ICR whale killing ships or navigate in an unsafe manner.  No civilized person wants commercial whaling and I am sure that the members of the Ninth Circuit panel are no different.  Perhaps the panel members accept the ICR lie that their commercial whaling is for research.  The ICR has yet, in all these years of so-called research, to produce a credible, scientific, peer-reviewed document. The ICR killing whales for research is a lie.  It is a lie when the ICR makes the claim and it is a lie when the ICR attorney presents it in United States court.

I am also sure that the members of the panel are motivated by a desire to prevent injuries, fuel spills, and even human death from occurring.  It is a noble desire and one we at Sea Shepherd share with them. Sea Shepherd has never hurt anyone, but the ICR has and does.  If the panel members really want to do the right thing, they can enjoin the ICR from killing whales.  However, they lack this power.  U.S. District Court Judge Jones recognized the inability of the U.S. court system to dictate actions by foreign entities operating foreign flagged flag vessels outside of U.S. waters.  This reality applies equally to the ICR operating Japanese flagged vessels as it does to SSCS Australia operating Australian and Dutch flagged vessels.

We do not like the injunction and I particularly do not like it because I am a staff member of SSCS US.  However, we at SSCS US are abiding by the injunction.  It means that SSCS US has had to separate from supporting Operation Zero Tolerance.  We cannot provide funds for the campaign, solicit donations for it, support it on our website, or provide any kind of direct support.  Some key folks on the ships had to resign from SSCS US.  What I can still offer however is my moral support.  I can still cheer on my team.  I can root for the heroes on the Sea Shepherd Australia ships who are risking life and limb to save whales. I can be extremely proud of everyone on the Sea Shepherd ships and even on the Sun Laurel for saving the lives of whales and standing up to the Japanese bullies.

Sea Shepherd is a mindset.  It is an understanding that we do not have to just let big powerful forces dictate the world’s destruction around us.  We have the ability to say no and take direct action to defend the living planet. Captain Watson is not proprietary.   When folks from other countries noticed what he was doing, they asked to participate.  Captain Watson said, “go and form your own Sea Shepherd.”  And they did.  They did it in the United Kingdom and in the Netherlands too and in France, Germany, Belgium, and Australia.   Sea Shepherd operates all over the planet now, either as an independent legal entity or as an affiliate of one.  Sea Shepherd Hong Kong was just named an official NGO observer to the CITES conference.

We share the name, the mission, the mindset, and the Jolly Roger, but we are independent.  Captain Watson inspired great leaders and supporters and they took up the mantle when he was forced to the side in this the greatest action.  We may fly the Jolly Roger, but as Robert F. Kennedy, Jr. said recently, “it is the ICR who are the pirates and criminals.” Captain Watson still inspires folks to take up the battle against death and destruction.  We are Sea Shepherd and I am proud to wear the garb.  Every one of us who is a Sea Shepherd supporter should be proud too.  We have never been stronger.