Hurrah for the Hammer! 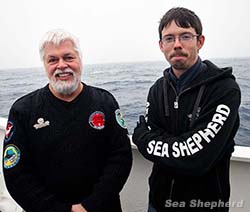 And for the first time I will not be on board.

I am today in the State of Utah of all places, driving to Boulder, Colorado, no longer an exile at sea although I remain exiled in America and unable to travel abroad.

I would feel apprehensive about the ships departing without me but instead I am confident that the vessels are in good hands, under the direction of Sea Shepherd Australia and the command of Captains Sid Chakavarty and Peter Hammarstedt.

Last season they demonstrated both their courage and their passion and along with their crews they shut down the Cetacean serial-killers of the Southern Ocean.

I don’t think there is any doubt that the action that forced the Japanese to retreat was the blocking of the Nisshin Maru from fuelling with the Sun Laurel.

The Bob Barker under the command of Captain Peter Hammarstedt held their ground and they did not move despite a battering by the immensely larger Japanese mother ship.

As the masts toppled, the helicopter deck buckled and the radar was crushed, Peter Hammarstedt defiantly informed the whalers that he would not budge and that they would have to sink the Bob Barker before he would be removed.

His crew stood beside him unflinching in the face of an imminent threat to their lives.

It is appropriate that this young Swede is named Peter. In Aramaic, Peter means “the Rock” and that is what Peter became in the Southern Ocean – the rock that stood between the killers and their fuel.

Peter “the Rock” Hammarstedt has been with Sea Shepherd since he was 18 and has rose from deckhand to captain during the last decade.

We witnessed his resolve when the Mounties failed to get a single word out of him under interrogation. We dramatically observed his courage in the face of an all out assault by the Nisshin Maru.

His loyalty over the years to Sea Shepherd, to the captains he served under, to myself and most importantly to our clients in the sea has been inspirational.

Passion, courage, imagination, loyalty, resolve, endurance, commitment. These are all words that I associate with Peter, the hammer and the anvil of the Sea Shepherd movement.

Peter has all the talents needed to be a great Sea Shepherd leader. In addition to his nautical skills, he is a great public speaker and a roaming ambassador for our oceans. He understands strategy and most importantly he understands media strategy.

I have heard people say that Peter is the new Paul Watson.

What he does share with me is the satisfaction of having discovered his life’s work at an early age. He knows what he wants to do and has never had any fear or hesitation about the role he has chosen.

He is a warrior for the oceans, a champion of life, an advocate for nature and a Sea Shepherd captain and I know that in thirty-five years when he is my age he will still be on the front lines for there is no retreat from planetary duty.

He was born a warrior and he will die a warrior and I’m confident that his life will inspire others and they will in turn inspire many others to pick up the banner of marine conservation.

At an early age, not yet thirty, he has already become an icon of the Sea Shepherd movement and the future will see him become a legend.

We are all seeds in a movement for the defence of nature, beauty, diversity and life.

Ten years ago Peter was an acorn and today he is an oak, still young but strongly rooted in his resolve to be an instrument of sanity in opposition to the ecological insanity of humanity.