‘Hope’ is Not a Strategy – It’s a Chinese White Dolphin!

Currently there is ‘hopefully’ a severely injured dolphin swimming around off the south coast of Lantau Island in Hong Kong. I say ‘hopefully’, as it was first sighted two weeks ago on the 16th January 2015 by a team from the Cetacean Ecology Lab, The Swire Institute of Marine Science, Hong Kong University. It has horrendous cuts down it back, clearly from a boats propeller. Several of the cuts are deep, however the tail has the worst wound, which has left the tail half severed off. These wounds are clearly infected and we are ‘hoping’ that it is still alive after no sightings in the past 48 hours.

We have decided to name this dolphin “HOPE”. 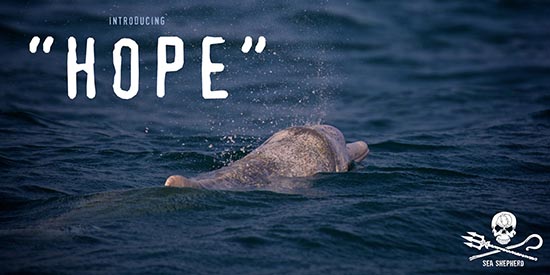 After all, that is probably the single most used word in conversations related to this dolphin. People ‘hope’ we find it, ‘hope’ that it’s not too late, ‘hope’ it doesn’t get hit by a ferry, ‘hope’ that AFCD will act soon….. Even our local HK dolphin ‘expert’ recently posted to his Facebook followers, “Let's send our best wishes to this dolphin and ‘hope’ that it will make it through this extremely difficult time”

We however do not believe HOPE is a strategy, (its much better as a name!) The people in charge need to start making solid decisions based on solid facts that put the animal’s welfare first and foremost.

When the story became public, Sea Shepherd dispatched its small boat, “Amberjack” to go and investigate and access the dolphin’s status. We were gifted with near perfect conditions on the 21st Jan and found the wounded dolphin within the first 30mins of searching. As opposed to other dolphins, this one was easier to find as it was doing what scientists refer to as ‘logging’. A behavior where cetaceans rest at the surface almost motionless. As we carefully approached the animal, there was no sudden movements to flee and we were concerned that maybe it had already died of its injuries. To our relief the dolphin began to swim, however it resembled more of a caterpillar than a dolphin, arching its back then propelling itself forward, then arching again and so on. The tail was literally dragging behind. The dolphin was only doing shallow dives for very short time periods and short distances.

Our biggest concern was that it was playing a game of Russian roulette in the high-speed ferry lane, one of the busiest stretches of water in Hong Kong where fast ferries and hydrofoils run between Hong Kong and nearby Macau. Without the use of its powerful tail, the dolphin’s chance of evading one of these vessels was greatly reduced. We spent the next 3 days placing the Amberjack between the dolphin and the high-speed ferries and ‘hoping’ that they’d change course to avoid us! Whether the animal could hunt and catch enough food to survive was also a question that still remains un-answered.

Seeing this animal, clearly in jeopardy raised a big question, what to do next? Sea Shepherd is and always will be opposed to captivity of any cetaceans, yet here is a dolphin that was harmed by mankind, which was clearly suffering. Chances of survival we initially accessed as limited to none, which was later, also confirmed by many specialists that we have spoken with.

So what’s the process? Who takes care of a wounded dolphin…….the obvious name loomed……Ocean Park Hong Kong, our local dolphin prison. They are the only facility that could not only accommodate, but have the veterinary expertise on hand. Further investigation revealed that the AFCD (Agricultural, Fisheries & Conservation Dept) of the Hong Kong Government, sub-contracts all marine mammal issues to Ocean Park, but they cannot act without a permit granted by the AFCD. They also take care of any stranding’s and necropsies.

Over the next few days the plot rolls out with a multitude of players, however a clear divide had formed. On one side many scientists and NGO’s as well as Ocean Park itself were calling for an immediate intervention, however on the opposing side was our local dolphin ‘expert’. Numbers and qualifications obviously don’t seem to count for much as the AFCD decided to halt any intervention plans after suggestions from him to “wait and just observe for now”.

Amberjack went out for the next 4 days and with every sighting of this injured animal, the frustration mounted. Why is no one making any decisions, how much more observations are needed, it was clear as day that the animal is not doing well, yet a stalemate was in place. Decision makers at AFCD were stuck between a rock and a hard place, on one side a decision to intervene could result in additional stress during capture that could harm or even kill the dolphin. Should that happen the backlash from those opposing would be huge, and the possibility of a successful recovery, treatment and release is very slim. The other option was to do nothing and just observe its slow death and fend off the mounting negative response towards the AFCD’s lack of in-action.

Sea Shepherd’s position in this matter is to the animal’s welfare first and foremost. We have been in contact with Ocean Park Hong Kong and they have assured us that if the animal makes a recovery it will be released back into the wild.