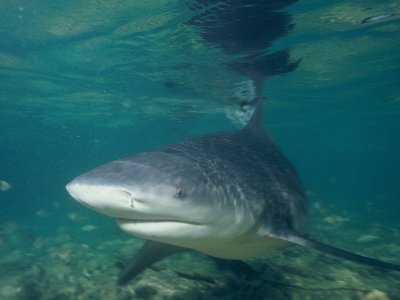 Worldwide shark attacks amounted to 80 in 2012,
of which 7 were fatal.
Photo: Wiki CommonsThe French prefect of Réunion Island has announced it plans to kill 94 Bull and Tiger sharks in an extreme response to five shark attack fatalities that have occurred since 2011. Last month, a 15-year-old girl died after being attacked while snorkeling and in May, a 36-year-old surfer died after an attack.

Worldwide shark attacks amounted to 80 in 2012, of which 7 were fatal. A lot more people simply drown while pursuing a form of water sport and we all know the comparisons that state toasters and vending machines kill more people each year than sharks, not to mention the numbers of people killed by cars or guns.

But these ‘toys’ are part of our highly urbanized post-industrial, high-tech way of life. We feel comfortable with them and, sometimes, mistakenly believe that we can control them. We no longer see ourselves as part of nature. Wilderness and wildness are perceived as adversaries of civilization.

The fact is sharks, crocodiles, polar bears, tigers & leopards do kill people. Some kill us by mistake, for others eating people is an easy way to make a living. The idea of a man-killing and -eating animal is disturbing to us. It nullifies thousands of years of human progress and pushes us back in the role of vulnerable hominids hiding in fireless caves. Out in the savanna we are as good a source of protein as a zebra or a gazelle. Just imagine yourself standing there naked in the tall grass and look at the animals around you. You lack the bulk of the hippo or buffalo, the tusks of the elephant or the horn of the rhino with which to defend yourself. You lack the speed of the antelope to flee and trees are few for you, a bipedal ape, to climb in.

Man as the great hunter? Where are your fangs and claws? Where are your muscles and where is your speed? Bones of Australopithecus robustus discovered in South Africa indicate that they were for leopards the most common prey.

In one version of human evolution we were naturally selected for large brains as our wits were the only thing keeping us alive in a hostile environment in which we were food. Eventually we went from gathering to scavenging to hunting and by the time we left the mother continent of Africa and fanned out over the planet, we wiped out a large part of the terrestrial mega fauna as we went. Our colossal numbers have driven the ‘wild things’ to extinction or into the small nooks we now call reserves and national parks.

As a terrestrial animal we had a lot more trouble in subduing the marine environment, but by the 18th century we had almost wiped out the slower great whales. Steam and later diesel engines gave us an advantage over the rorquals and they went on a path to near-extinction as well. These same engines combined with installation of onboard freezers gave us the opportunity to leave coastal waters and fish ever further away and ever deeper and did what was long thought impossible: empty the oceans of life. The oceans’ mega fauna — cetaceans, manatees, tuna, billfish and sharks — were just the last in a long line of beings to suffer our insatiable appetite, greed and population expansion.

Today we are killing 40 to 100 million sharks each year depending on whose figures you believe. A lot of them die to thicken a tasteless Asian soup. Do we really have to wipe them off the face of the planet out of pure spite…because they kill 7 of us each year?

Réunion is apparently a student of the Japanese school of hypocrisy, as they have labeled their planned slaughter ‘science’. Last year Réunion killed 24 sharks, to check them for the presence of dinoflagellates, a marine plankton that causes ciguatera, a sometimes fatal food-borne illness caused by consuming contaminated fish. The new witch hunt, targets only the two shark species considered dangerous — bulls and tigers — and will take place only in the areas where attacks on humans have occurred. Besides that, the sale of shark for food is already illegal on Réunion so this upcoming cull is really just the lynch mob’s revenge under the guise of science. 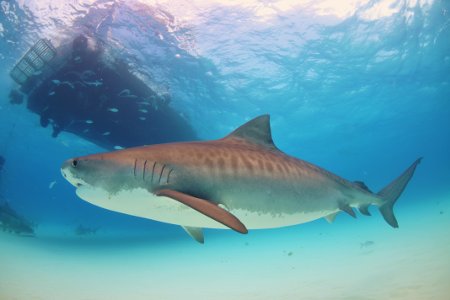 Réunion Island has announced it plans to kill 94 Bull and Tiger sharks in an extreme response to five shark attack fatalities that have occurred since 2011
Photo: Albert Kok / Wiki Commons

But real science would concentrate on what changes in the environment, changes in sharks and their prey populations, and changes in human behavior could have led to this concentration of shark attacks. Is over-fishing an influence? Or do protected areas or fish farms attract sharks?

Maybe lessons can be learned from the much better documented man-eating lions in Africa. Lion attacks would increase when disease, the draining of swamps and wetlands, or the culling of herd species would deplete their prey species.

There might be a parallel there with overfishing. But the most important deciding factor, which is really a no-brainer, is the availability of humans. First there was the ivory and slave trade that brought plentiful humans into the range of lions. Later it was the building of roads and railways that brought an abundant cache of prey to lion territory in the form of imported labor. The population explosion followed next and meant encroachment on natural habitats, then predation on humans balanced out with a reduction in the number of lions and their habitat.

Obviously there is a similar scenario in the case of sharks. The major contributor to the number of attacks that occur each year is the amount of humans that trek to the coasts to spend time in the water. An important extra factor is the shallow, murky surf the majority of people choose to spend their beach time in. If you're going to take a dip into the sea, you must take safety precautions but also be willing to accept the consequences.

It all comes down to personal choice. If you bungee jump off a bridge with a piece of elastic strapped around your ankles, it is a sad occasion when you hit the ground in a tragic accident. But you are to blame; you decided to take that risk. Why would that be different if you decide to dive into the ocean, the home of these animals?

But in the case of shark attacks, the shark gets blamed.

This is very strange reasoning. When zoo or circus animals escape, they usually get shot for entering the human realm, but when a person, for whatever reason, decides to climb into an animal enclosure and gets mauled the animal is blamed. The same happens when a zoo or circus worker disregards safety protocol and gets him- or herself killed. Human stupidity, ignorance, irresponsibility or just plain bad luck, are good enough explanations for the event. The most famous of these “circus” animals is of course Tilikum, the orca slave that killed three individuals after his victims entered his bathtub at SeaWorld — his territory.

We do the same when we step off the relative safety of land and enter the salty waters. It is not our home, it is the animals’. But in the case of sharks, we stand ready to “cull,” which is simply a more palatable way of saying “kill.” Réunion is a shark place! It's a tropical island where sharks have historically been common. If you put more and more people in the waters, something will go wrong one day. That’s no reason to forego going there if you choose to indeed go. You just have to take precautions and accept the risk.

Given the dire straits that shark populations are in around the globe due to overfishing, finning, bycatch, pollution and other human-induced stressors, the last thing to add to the list of environmental assaults at this time is a cull. Let’s keep Réunion a sharky place. Please sign and share the petition.