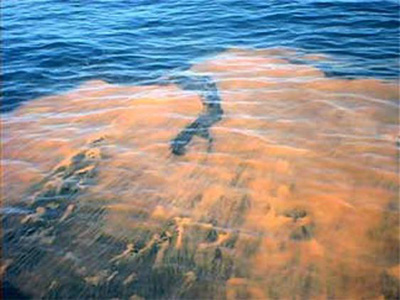 Red tide produces brevotoxin, a nerve poison which is responsible for a record number of deaths among Manatees
Photo courtesy NOAAManatees are beloved here in Florida, and we saw just how much at this year’s Manatee Festival in Crystal River raising awareness about the endangered animals. Aside from their lovable nature, manatees are important to the marine ecosystem as grazers of seagrass and other vegetation. However, the manatees that call Floridian waters home are facing serious and imminent threats.

Due to their declining numbers, protections have been established for them. The Florida Manatee Sanctuary Act of 1978, the Marine Mammal Protection Act of 1972 and the Endangered Species Act of 1973 protect manatees under both state and federal law. Under these protections, it is illegal to harass, hunt capture or kill them in the United States, but they continue to face other threats including boat collisions, loss of habitat, pollution, fishing lines/nets and an annual toxic algae bloom known as red tide named after the color change it creates underwater.

Although many algal blooms are not harmful and actually provide a large amount of food for oceanic life, some algae grow excessively depleting oxygen in the water and produce toxins harmful to marine life, ecosystems, as well as humans. Red tide produces brevetoxin, a nerve poison which marine mammals consume when they eat plants such as seagrass, other marine life that have ingested the toxin, or when they ingest the algae itself. Brevetoxins can also be harmful to humans through the consumption of shellfish or if the toxin becomes airborne.

Prior to 2013, red tide was responsible for the mortality of a record 151 manatees in 1996, but this year combined causes of death have taken a much larger toll on the manatee population. According to a report from the Florida Fish and Wildlife Commission, 585 manatees have died as of May 2, 2013 - that’s approximately 11 percent of their total population! Some ill manatees have been found and are being rehabilitated at various facilities.

While red tide is killing manatees on Florida’s southwest coast, their population is also being threatened by unexplained deaths on the eastern coast of the state, which some experts believe is due to the manatees consuming algae in place of their usual seagrass that has been dying off.

The struggling manatees recently caught a break when Florida passed HB999, an amendment to a bill to create environmental regulation such as enforce local fertilizer ordinances and wetlands regulation (as one possible cause of algal blooms is runoff from agricultural and industrial operations). With summer quickly approaching, the manatees face yet another threat in an increased number of boaters.

On top of everything else, the U.S. Fish and Wildlife Service is considering changing the status of manatees, one of the first species listed as endangered after the passing of the Endangered Species Act, from endangered to threatened. As manatees are still facing severe threats and 2013 has been a record-breaking year for manatee deaths, we are urging that they continue to be protected on federal, state and local levels.

The manatees desperately need our support on a national level, here’s what you can do to help the manatees of Florida:

1. Contact the U.S. Fish and Wildlife Service using the contact information below and ask that the manatee continue to be a protected species listed as endangered on the federal Endangered Species List, and to protect manatee habitats.

2. Get familiar with the boating guidelines for manatee protection and always USE CAUTION. Above all, keep out of areas designated as “NO ENTRY - MANATEE REFUGE.”

If you happen to accidentally run into a manatee with your boat (please don’t flee) or find an injured, ill or dead manatee, please report the sighting immediately! Use the contact information here:

VHF Channel 16 on your marine radio if you see a manatee being harassed or an injured, dead, tagged, or orphaned manatee,

Please be respectful of manatees - DO NOT TOUCH, FEED, FOLLOW, OR HARASS MANATEES IF YOU SEE THEM!

3. Spread the word, awareness can create change. Please share this with friends and family concerned about the wellbeing of our nation’s animals, especially those residing in Florida.

4. Participate in a beach cleanup, organize your own, or connect with Sea Shepherd Jacksonville on Facebook for upcoming beach cleanup events. 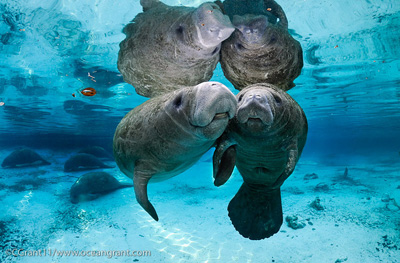