Fish On Friday - NO THANK YOU! 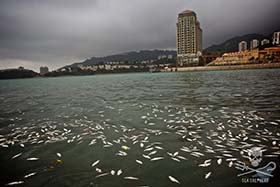 As we learnt from the plastic pellet spill several years ago, the currents of Hong Kong deposit everything into the Discovery Bay area. It is possible, then, that these fish may have died around Lamma Island, South Lantau or even further afield.

At least three, possibly four, Indo-Pacific finless porpoise (Neophocaena phocaenoides) - listed as vulnerable by the International Union on the Conservation of Nature (IUCN) - were also reported to have died yesterday, according to calls made to Ocean Park’s Marine Mammal Stranding Unit. Although the animals seemed to have died from a variety of causes, cetaceans are known to bio-accumulate, meaning chemicals become concentrated inside their bodies. The result is that, if they eat a number of sick fish, which may be easier to catch, then the cetaceans are likely to get sick too, making them more vulnerable to predators.

Sea Shepherd Australia’s Cetacean Field Vet, Dr Verne Dove, has indicated that it is highly likely that there is a connection with the porpoise deaths and the dead fish, which are the natural prey of the finless porpoise.

In an indication of further problems, we have seen a massive population bloom of jellyfish in areas such as Discovery Bay, Deep Water Bay and Repulse Bay. This means that water temperature, water salinity or oxygen levels may be out of balance. Wild birds have also been seen eating the dead fish on the beach, which may impact the health of these populations.

In light of the mass die-off of fish, Sea Shepherd is urging Agriculture, Fisheries and Conservation Department (AFCD) and Food and Environment Hygiene Department (FEHD) to investigate any possible impacts on humans who may consume affected fish as food.

Sea Shepherd has continually stated that what we negatively do to the sea, will have negative effects on the land. This is, sadly, is a perfect example of where what effects one species may affect a multitude of others.

Test will be carried out on the fish and results will be posted.