Fin whales will be hunted this summer in Iceland!

Kristján Loftsson, CEO of the Icelandic whaling company 'Hvalur hf' has stated in the Icelandic media that his ships will once again be hunting threatened Fin whales (the second largest whale species after the blue whale). Based on previous whaling season statistics and conversations with Hvalur hf whaling crew, we expect Loftsson's intention is to kill at least 140 Fin whales between mid-June and early September, with his Icelandic Government permit allowing potentially up to 180 to be killed.

Loftsson has admitted in the Icelandic press that his whaling company 'Hvalur hf' has been involved in a long tug of war with the Food Administration (MAST) due to issues around hygiene at the whaling station in Hvalfjörður, issues which Sea Shepherd documented and reported to MAST via Sea Shepherd Legal and an Icelandic law firm during 2018.

Hvalur hf has now received a license to process whale products as reported in the Icelandic newspaper Morgunblaðið: https://bit.ly/3D7p14l

Currently the whaling ship Hvalur 9 is out of the water in Reykjavik for repairs and maintenance, and we can expect Hvalur 8 also to be repaired over the next 2 months in preparation for whaling this summer - https://bit.ly/357hAOi 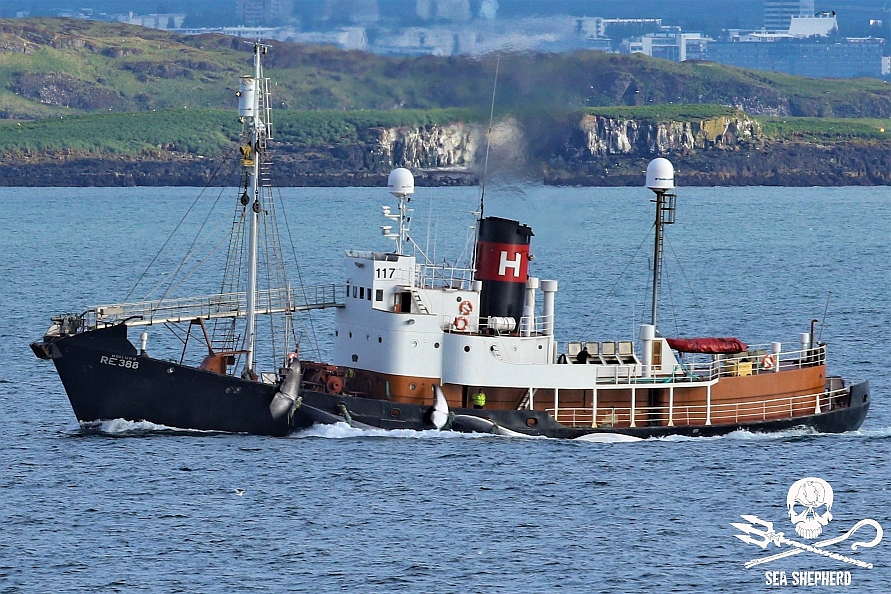 Minke Whaling in Iceland has ended, and Fin whaling by Loftsson is expected to end when the current 4-year licence block expires at the end of 2023 as reported at https://bit.ly/3qt9szc

Loftsson's whaling company is on its way out. However, Loftsson seems to want to continue whaling to the bitter end.

Sea Shepherd will not allow Loftsson to cruelly harpoon these magnificent whales in secret. The world will see every whale which Hvalur 8 and Hvalur 9 brings back to the whaling station at Midsandur on Hvalfjordur.

Iceland is one of only three nations (the others being Norway and Japan) that have chosen to ignore the 1986 international moratorium on hunting the great whales.

Hvalur hf's aging whaling ships use explosive harpoons that often do not instantly kill the whales, with Sea Shepherd crew in 2018 documenting dozens of whales with 2, and sometimes 3 harpoons embedded in them.

A majority of Icelanders are now against whaling and there is no local market for fin whale meat, so Hvalur hf has to export around 95% of its products to Japan.

Whale watching in Iceland is a responsible and highly profitable alternative to the whaling industry and is growing in popularity as people visit Iceland to see these majestic marine mammals swimming free in the oceans where they belong.

Please email or write polite letters voicing your support for Iceland's whale watching industry and the establishment of a national whale sanctuary in Iceland's territorial waters:

Donate to Sea Shepherd UK to support the campaign and end all whaling in Iceland: https://www.seashepherd.org.uk/news-and-commentary/news/donate