False Sense Options for Shark Mitigation are pushed to the side in Ballina, NSW Meeting 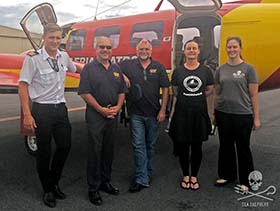 All councils were united in their message, that in light of several injuries and fatalities involving sharks, a cull was not an option as their communities respected the place sharks have in our oceans especially with (contrary to WA) tourism being a major importance, with many people travelling to the Far North Coast for surfing, scuba diving etc. and also the eco friendly vibe of the region.

The representatives from Sydney presented the council attendees with slide shows and talks about their relevant organisations and what their organisation can do to assist the councils with implementing non-lethal alternatives.

NSW Apex Harmony Coordinator Allyson Jennings presented attendees with a history of Sea Shepherd and then went on to speak about the successes Sea Shepherd has had in collaboration with governments around the world. This included the successful Galapagos campaign assisting Ecuadorian authorities in a bid to prevent poaching and trafficking of wildlife with the establishment of a K9 sniffer dog squad (first of its kind in South America) and the current Operation Icefish campaign which is having great success in the pursuit of the Thunder and other Illegal Unreported and Unregulated (IUU) fishing vessels.

Our current shark defence campaign Operation Apex Harmony was also highlighted and councillors were presented with options with how Sea Shepherd could assist councils with implementing non lethal alternatives such as Shark Spotting programs, barrier construction and monitoring, public and tourist specific awareness. 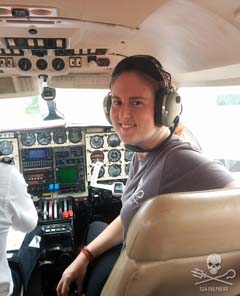 Allyson playing co-pilot on the flight home. Photo: Sharnie ConnellIn addition, the establishment of a shark summit for this year was discussed to build on this campaign, with further planning and details to follow. This would be extended to government authorities, conservation groups, lifesaving and patrol groups and other interested stakeholders to participate in to advance the cause of non-lethal alternatives to provide a win-win situation for marine wildlife and the ocean going public.

“A special mention must be given to Ballina Mayor David Wright, who in the week of the sad passing of Tadashi Nakahara, has shown incredible leadership for his community,” Allyson said.

“Cr. Wright gave 53 interviews to the media during that tragic week on the proviso that no sensationalism of the event would be tolerated and continually reaffirmed that those who assisted on the day of Tadashi's death were the priority of the community.”

Overall, the meeting was a great success with all council attendees unanimous in their support for better solutions to minimising human/shark interactions without the use of lethal drum lines and shark nets. As a result, Ballina Council committed on the day of the meeting to establishing a trial of non-lethal alternatives and a week later Byron Shire Council has also come on-board expressing interest in having a trial as well. This is a terrific result so far and Sea Shepherd Australia commends Ballina Council and all who are working towards safer solutions for our oceans and the public.

Sea Shepherd Australia is standing by to assist in anyway going forward, to see that current world’s best and safe solutions are put in place that don’t merely provide a false sense of security like drum lines and shark nets, that have killed thousands of precious marine life over the years including whales, dolphins, dugongs, turtles, rays and sharks.