Close Call for Pilot Whale Pod in the Suderoy 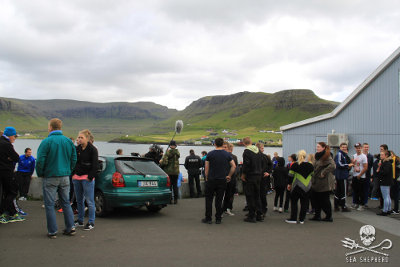 Sea Shepherd land-based volunteers observed
the locals preparing for a grindadrap in Hvalba
Photo: Sea ShepherdToday, a pod of pilot whales was sighted off the southern Faroese island of Suderoy at Tvoroyri. As Faroese headed towards Tvoroyri the pod of whales was observed moving towards Hvalba, the most northerly of the beaches on the island.

Sea Shepherd land-based volunteers observed the locals with their killing tools headed to Hvalba as the Faroese police dispatched a helicopter from Torshaven and the Danish Navy moved into position at the mouth of the bay.

The police set up a roadblock to prevent Sea Shepherd’s land crew from following the whalers to the beach. However some of the Sea Shepherd crew reached the beach prior to the roadblock. They were aggressively removed by the police. The Suderoy grindmaster with three boats had left to intercept the pod of whales so as to begin the drive to push them towards the killers on the beach.

Meanwhile the Brigitte Bardot headed rapidly to the area from where they were patrolling off Suderoy. When they arrived they saw three inflatables and a Naval vessel standing guard. Shortly after the Brigitte Bardot arrived, a Danish frigate entered the bay. The land volunteers saw people on the beaches and cars and observed them coming in from other locations on the islands. Volunteers observed men getting out of their cars, carrying hooks and armed with knives.

Locals gather in anticipation
Photo: Sea ShepherdJust as the Brigitte Bardot arrived, we heard that the Grindadrap had been called off and the grindmaster had returned to shore citing bad currents. Some locals were grumbling that it was an excuse and accused the grindmaster of calling it off because of Sea Shepherd.

Most importantly the Grindadrap (whale slaughter) was called off. The police packed up their plastic handcuffs and the whalers packed up their weapons and everyone either went home or to the pub.

Exactly one year ago today 450 pilot whales were slaughtered at Hvalba Beach.

Today there are 59 volunteers on land and 28 on the water with six boats. A total of 87 Grindstop volunteers actively standing guard for the whales. They will be keeping a close watch for the passing pod as it heads away from Suderoy.

Lots of excitement but no Grind, no conflict and no whales murdered.

All the volunteers responded quickly, efficiently and successfully. Well done.