CITES – Victory of Good Over Evil

“The only thing necessary for the triumph of evil is that good men do nothing.” --Edmund Burke 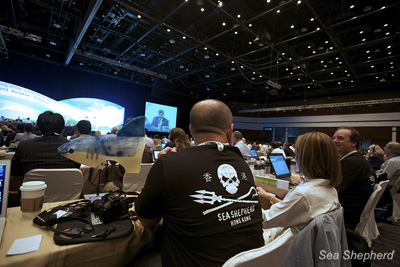 Sea Shepherd in CITES
Photo: Sea ShepherdThe room erupts in cheers and applause as the result of the vote is announced, the Oceanic white tip shark is now safely listed on the CITES Appendix II. Shortly followed by the three Hammerheads, the Porbeagle Shark and both of the Manta’s. More importantly, CITES itself has regained some teeth as a resounding NO came from many of the worlds delegates in response to the Japanese led charge to block protection of all marine species. Enough is enough!

This has been a long two weeks in Bangkok at the 16th Conference of the Parties (known as the CoP16). It was also the first time ever that Sea Shepherd has been represented. We are now officially accredited as a CITES International NGO Observer, a position that allows us to enter the debates and put across our opinions. At this CoP there were only 44 official International NGO’s.

Most of my time at the meeting was spent lobbying, which is something new to me, however when it comes to talking about sharks and what I have personally seen and documented, I guess you could say I am slightly passionate on the subject. So that's what I did, talked sharks for two weeks and being in their corner at CITES, there was no place I’d rather havebeen. But we were up against some heavyweights. China was passively lobbying support to block any protection, something they did if I may say, with some dignity. Japan however was frantic. They were running here and there, aggressively lobbying hard, openly taking out delegates for dinner and “entertainment”.One night they even hosted the entire Chinese delegation. Apparently sharks fin soup was not on the menu!

The smell of corruption and underhand deals around the halls was foul, and it was everywhere. All in one hall you have shark fin traders, trophy hunters, ivory crafts and tuna fishery representatives and anyone else who makes their money from the death and destruction of species. Interlaced amongst them are some “good NGO’s” and some “not so good NGO’s”. These were NGO’s set up to discredit everything that we bring to the debate.

Then there are the lowest of the low, the ex-CITES prostitutes. These are former CITES people who’ve retired and set up their own consultancies, selling their souls to the highest bidder. Anyone who needs help navigating through the entangled web of CITES to ensure nothing gets protected. Eugene Lapointe established his IWMC who had a massive presence. Eugene was a former Secretary General of CITES who fell from grace, but that's a whole different story. Working with the Hong Kong shark fin traders was Robert ‘Hank’ Jenkins, the former Chairman of the CITES Animals Committee. How anyone can take him seriously, turning up to the event in sandals I don’t know, but I do know that whatever he cost Charlie Lim and his associates was money wasted. His arrogance was his downfall, a fall I took great pleasure in watching from my table, just 10ft away. He paid me the nicest personal compliment after he introduced himself as “Jenkins, the guy you’ve been slagging off”, he told /warned me, “I’ll never forget you!” I was touched…

The entire Dr Giam campaign was started from a letter to the South China Morning Post from Jenkins. This was what caught the eye of my ex-law enforcement partners in Hong Kong, which then spawned a full investigation, resulting in the Giam Report which neutralized Dr Giam Choo Hoo’s influence within the CITES Animals Committee. Also present was Hank’s sidekick Glenn Inwood, the media puppet of the Japanese whalers, and then of course Giam himself made an appearance. He just couldn’t stay away, the only Asian man I know who has no ‘face’ or shame. He is a thing of the past in our opinion; no one will ever take him seriously again, so he should just enjoy his retirement. I met one of the current Animals Committee members who said to me, “Giam’s a real pain in the ass at our meetings”. His words not mine, but I get where he’s coming from.

So after the great victory in the Committee Meetings on Monday where all the sharks got protection, we were nervously awaiting the plenary session where the votes could be re-opened and over-turned. The Japanese delegation were busy..correction..they were VERY busy, trying to secure more than 1/3 of the votes that they would need to re-open the votes. We had a tip from one African delegate, the restaurant that Japan was taking the Africans out for dinner the night before the plenaries, so we followed to document. Other NGO’s also followed and some even went into the restaurant for dinner and filmed inside. After the dinner they went off to Japanese run karaoke/brothels.

One of the major trump cards up the Japanese sleeve is the “Secret Ballot”. Once requested and supported by ten others, this enables no one to know what anyone voted. Talk about a lack of transparency, this opens up the possibilities for bribery and vote buying. So it has to go, or so I thought when I arrived, but that changed during one lunch.

I was sat at the table in the cafeteria when a delegate from a certain small island nation sat at the table. We started talking and I asked about his countries standpoint on the shark vote. He told me that they are in a coalition of small islands that all receive aid from Japan, so have all been told to vote NO. However, he went on to tell me that he hoped it goes to a secret ballot, so then he can vote with his heart. Other nations he said, felt the same. Interesting, and certainly an angle I hadn’t considered and as we saw later, something that Japan and China had overlooked. 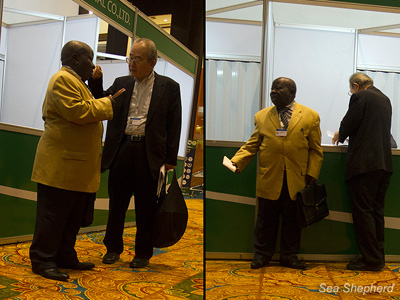 The secret ballot is something that has also been noted by the CITES Secretariat, and John Scanlon and his team have raised concern at its frequent use on speciesof commercial value, mostly marine species but also ivory and rhino horn. John Scanlon and his team should be praised for their efforts to turn around CITES and to get it back to being a credible entity. It’s certainly no small feat, especially when your hands are somewhat tied, but something we hope that we have helped in a little way.

I met David Higgins of Interpol Wildlife Crime, and attended a meeting of the ICCWC (International Coalition Combatting Wildlife Crime) as well as made valuable contacts in law enforcement. It was ironic meeting with all these law enforcement types in one room, knowing that just outside the doors, bribery and corruption was rife! But the tide is changing and the newly formed ICCWC aims to tackle wildlife crime head on, and they certainly have the teeth.

Another great thing to come out of this CoP was the inter NGO relations. Everyone was united against a common enemy, and we all had different roles to play. Sea Shepherd was, as always, the ladies of the night of the conservation movement. Everyone was happy we were there, but didn’t really want to be seen hanging with us! We had our role, and certain pieces of info were fed to me from the more squeaky clean NGO’s, “because it’s not really something we can do, but it’s right up your street!” 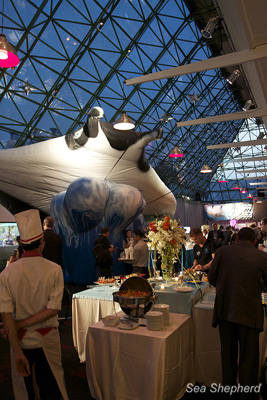 Manta Reception
Photo: Sea ShepherdThis united approach was what, I believe, won it for the sharks, no in-fighting, everyone focused and communicated back to each other. If we came across a delegation that were un-decided, we’d find out why and introduce them to people who could help answer their questions. In the case of the manta’s,many delegates said there was not enough science fact, so having two of the worlds leading manta experts, Dr Andrea Marshall and Guy Stevens on hand was invaluable to securing votes.

So, it's the morning of the plenaries. I enter the main hall to see a very welcoming sight, the guys from Divers For Sharks (Pinguim Paolo Guilherme and Jose Truda Palazzo Jr of Brazil) were both wearing the Sea Shepherd Jolly Roger shirts I had given them and were sat right in the center of the room in front of the TV media cameras, I joined them as we waited on tender hooks for the results. The suspense in the air was electrifying and when the first result, the Oceanic white tip came through, years of work by lots of people and the support of everyone globally came to fruition.

What happened next was powerful. Like a scene from a Hollywood movie, USA asked for the floor. They announced, “In the interest of transparency, the USA voted NO (to re-opening the vote)”. This was then followed by country after country openly declaring what they had voted in the secret ballot. This went on for some time, the chairman actually had to ask delegations just to announce their country and vote in the interest of time.

Japan, China and Singapore had used their Secret Ballot trump card, but not only did this back-fire and give countries the ability to “vote with their heart”, the secret ballot was becoming not so secret in-front of the worlds media. One African delegate announced, “I secretly voted NO in the secret ballot”, which got a round of applause. Not everyone was happy with the results of course. In an interview with the BBC afterwards, Mr Shingo Ota, the spokesman for Japan’s negotiating team said, “"It was not so pleasant to listen to all the clapping and sometimes screaming on the floor!"

So in closing, 2013 so far has been a good year for the oceans. While I sat in CITES fighting for the sharks, our brave crews were making the journey home to Melbourne where they will get a much deserved heroes welcome after shutting down Japan’s illegal whaling again in the Southern Oceans and securing what will be the best result ever!

The next meeting of CITES CoP17 will be in South Africa 2016, and we will be back and in larger numbers that is for sure – NO COMPROMISE!! 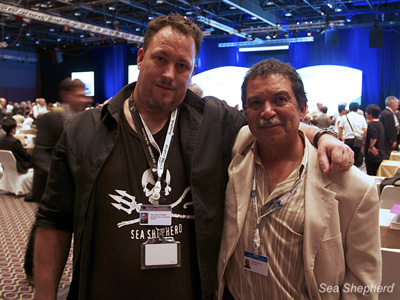