CITES 101 and the Year of the Sharks? 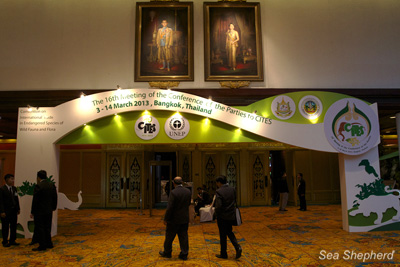 Entrance to CITES CoP16 in Bangkok, Thailand
Photo: Sea ShepherdMarch 11th, 2013  — Wow, what a day. For the past week or so I have been at the CITES CoP16 meeting in Bangkok. This is the first time Sea Shepherd has had a representative here in the capacity of International NGO Observer, and for that I am proud and honored to be representing the most effective marine conservation organization on the planet. There are many here that do not welcome our attendance, but this only pleases me all the more, as this goes to show how effective we are at doing what we do, saving wildlife, and if this upsets the balance of those who profit from the death and destruction of our natural world, all the better for it.

Yesterday was a remarkable day. All of the sharks and manta species that were proposed for the CITES Appendix 2 listings, were successfully listed.

But just what does this all mean? I’ll try and explain.

CITES is a convention that controls the TRADE in endangered species — animals and plants that scientists feel are getting threatened by their international trade. CITES does not say what is endangered and what is not, they take scientific advice and present it to the country delegates at a Conference of the Parties (CoP) meeting and they then vote on whether any control on the INTERNATIONAL TRADE is needed or not. They should listen to the science facts, but sadly over the years it has been about the trade value and how it may affect peoples earnings and lifestyles.

CITES has what are called the Appendices, and these offer different levels of trade restrictions for animals.

Appendix I – They are threatened with extinction and CITES prohibits international trade in these species except when the purpose of the import is not commercial, for instance for scientific research. In these exceptional cases, trade may take place, provided it is authorized by the granting of both an import permit and an export permit (or re-export certificate).

Appendix II – Lists species that are not necessarily now threatened with extinction but that may become so unless trade is closely controlled. It also includes so-called "look-alike species", i.e. species of which the specimens in trade look like those of species listed for conservation reasons. International trade in specimens of Appendix-II species may be authorized by the granting of an export permit or re-export certificate. No import permit is necessary.

Therefore an Appendix II species can still be killed without any restrictions, in any country unless that country develops its own domestic laws / quotas prohibiting this. 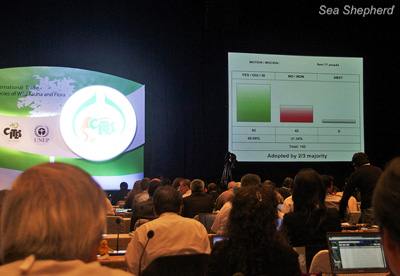 So what does this mean in relation to the shark votes yesterday?

The votes yesterday passed, however as in previous CoP meetings, this isn’t final. They can still be discussed again in what are called the plenary sessions. As with the Porbeagle shark at the last CoP15, it passed but then the vote was re-opened in the plenary session, where it failed to get enough votes, so ended up receiving no protection. So don’t break out the champagne just yet, wait until the end of the CoP16 later this week. 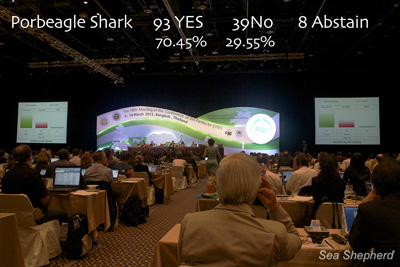 Why have a re-vote?

Let’s say certain countries and lobbying corrupt NGO Observers will not be happy with the outcome of yesterday, specifically Japan, China, Singapore, Cambodia and Guinea. I am sure the check books are out and they will be working hard now to persuade some countries to change their vote. If they get enough, they may call to re-open at the plenary sessions.

So whilst this is an amazing turn of events, it is just a step in the right direction — a step on a long road to saving sharks. I don’t mean to rain on anyone’s parade, but I am a realist. There is an 18-month implementation period so that countries can train their fisheries offices and customs divisions. The reality is that sharks will continue to be killed in massive numbers, and most of the killing occurs on the high seas where there is little to no enforcement.

However the CITES listings will help the sharks as many nations look to CITES for guidance in what to protect with their Regional Fisheries Management programs. The more countries that prohibit the targeting and landing of sharks, the better. By making sharks or their fins illegal, we can then work on enforcement.

Sea Shepherd Conservation Society opposes illegal operations on the high seas and works within the boundaries of the laws set in place. By passing laws to protect sharks, we can then work with local governments, law enforcement agencies or independently on the high seas to enforce them. A classic example is in the Galapagos, where we work with the Ecuadorian Police and the Galapagos Park Rangers to help stamp out illegal fishing and shark-finning.

So let’s all celebrate at the end of this week if the shark species in question are listed within the CITES Appendices, but please remember the battle to save sharks is a long way from over. 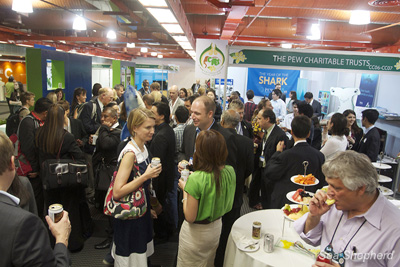 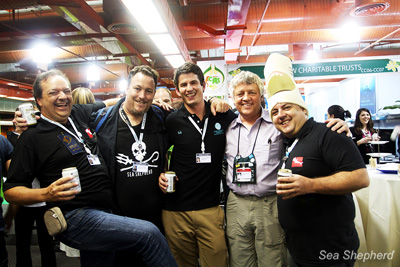 Celebrating for the sharks with our friends from Brazil's Divers For Sharks, who have represented the global diving community on the shark and manta proposals
Photo: Sea Shepherd 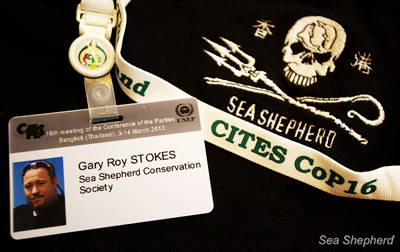