Chinchilla Says the President is Not Responsible for Government Corruption 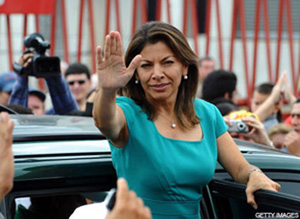 Over the years I have seen a great deal of silliness emerge from the mouths of politicians but I don’t think I’ve quite heard anything as absurd as this.

President Harry Truman once stated that “the buck stops here.”

Not so with Costa Rican President Laura Chinchilla. The “buck” does not come anywhere near her, or so she says.

What she is saying is, “I and my ministers are not corrupt, its’ just the people around us who are corrupt.”

She has also said that her government does not censor free speech. Yet only six weeks ago she called in a group of attorneys to file lawsuits against anyone who criticized her government on social media. Her government informed the Tico Times that they had no right to publish anything about me without consulting with the government first because I am wanted on charges of interfering with one of their illegal shark finning operations a decade ago.

The Press Advisor for MINAE (Ministerio de Ambiente, Energía y Mares de Costa Rica) said “A member of the news media should collaborate and verify before giving publicity to the affirmation of a person who is being processed by the judicial branch of Costa Rica and is wanted internationally by interpol.”

The Editor for the Tico Times responded publicly by saying, “I am sorry, but if news organizations refuse to give voice to anybody who has been persecuted criminally or politically to anyone in the world then what kind of democracy would we be.”

And of course I have not been convicted of any crime.

No such advice has come from the government in reference to Luis Dobles.

And investigations continue into corruption charges against Luis Dobles, the Executive President of the National Institute of Fishing and Aquaculture (INCOPESCA). He is accused of taking bribes from shark finners. I have been saying for years that both he and Laura Chinchilla are corrupt. So far one of them at least is teetering on the brink of full exposure.

The man who brought charges against me for intervening against shark poachers is now under investigation for being bribed by shark poachers. I may be wrong but that smacks vaguely of conflict of interest, and casts serious concerns about political interference with regard to the case against me.

INCOPESCA is a Costa Rican government agency, yet President Chinchilla believes that it is not her responsibility if this agency is corrupt.

Personally I believe that the corruption runs rampant through the Costa Rican government straight to the office of the President. She still has not explained why she was given a free flight on a plane owned by a drug cartel.

There is a great deal of money being made in Costa Rica from the illegal exportation of shark fins and from drugs. Government fuel subsidies are being given to vessels that have been caught poaching and smuggling drugs. Is the President saying this is not her responsibility?

If she is not corrupt than why are shark finners operating with impunity out of Costa Rican ports and continuing poaching activities in the Cocos Island Marine Reserve? Why are the rangers not given the support they need? Why are drug cartels calling the shots and able to land their packages on Costa Rican beaches without fear of interception?