An open letter from Captain Peter Hammarstedt of The Bob Barker addressing the Hon. Greg Hunt, Australian Minister for the Environment, following the second attack on his ship by the Japanese whaling fleet.

Captain Hammarstedt questions the Australian government's commitment to protecting the Southern Ocean Whale Sanctuary as they take no actions against the whale poachers of the Japanese whaling fleet.

"I believe that I’ve shown restraint this season in the good faith that we had the protection of the Australian Government. But after sustaining two consecutive and completely unprovoked attacks, some of the most ruthless assaults in the history of Sea Shepherd’s Antarctic Whale Defense Campaigns, I’m losing hope." - Captain Peter Hammarstedt. 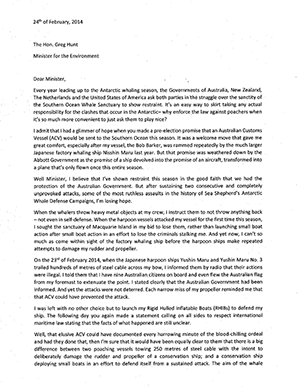 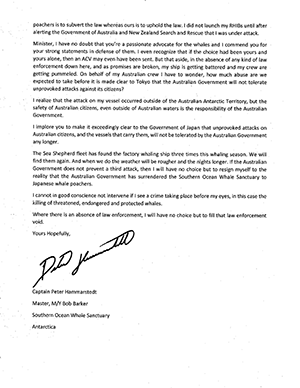 *If you have a popup blocker, here is a direct link to the letter