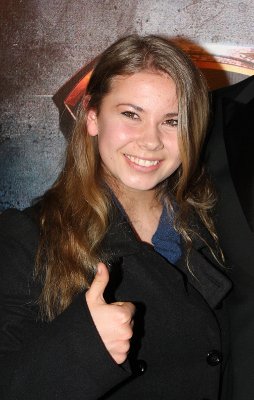 Bindi Irwin
Photo: Wiki CommonsSea Shepherd Conservation Society is solidly in support of the film Blackfish and firmly in opposition to the way SeaWorld treats their captive cetaceans and their trainers.

It is our objective to see SeaWorld shut down or radically transformed into a facility that emphasizes education, wildlife rescue and completely abandons using marine mammals for entertainment.

There has been a great deal of criticism in the last few days directed at Bindi Irwin.

Some of this criticism strangely enough has even been directed at Sea Shepherd because we have a ship named the "Steve Irwin."

So first of all I want to make it very clear that Sea Shepherd is immensely proud that our flagship is named the Steve Irwin. He was a wonderful educator, especially for children and he was a staunch conservation activist.

Bindi Irwin and her mother are my friends and although I would prefer that Bindi not serve as an Ambassador for SeaWorld, I will not judge her for her decision.

Bindi is fifteen years old and has been a conservationist all of her natural life. She was raised to love, respect and care for animals and I have witnessed first hand her love, respect and passion for the welfare of animals.

And as a young lady she is learning about the world and I think she feels she can make a contribution to wildlife conservation in the United States by promoting her wildlife education project in cooperation with SeaWorld. She actually began this project with SeaWorld over a year ago. She is not advocating for Orcas to be in captivity, she is advocating for educational programs for children.

But because of her affiliation with SeaWorld, she will now for the first time be experiencing the intense emotional pressure of taking a controversial position and this will most likely be the most controversial decision of her career.

We must keep in mind that some of the strongest voices against captivity of dolphins and other animals have come from former trainers and people employed in the captivity industry. I have had a former SeaWorld trainer as an officer on three of our ships and numerous campaigns.

Bindi Irwin has had the privilege of being raised by two wildlife conscious parents in one of the most humane and proactive zoos in the world. This is a Zoo that runs the largest wildlife hospital in Australia and actively seeks to acquire land for conservation of wildlife.

In this respect she may not yet realize just how bad SeaWorld actually is. Whereas the Australian Zoo is one of the best in the world, Sea World is one of the worst.

I know Bindi personally. She will investigate behind the scenes. She will not be a thoughtless puppet for SeaWorld. And she will voice her opinion.

We should not be distracted from who the real enemy is here.

It is not Bindi Irwin. It is SeaWorld and the issue is the mistreatment of the Orcas and the irresponsibility of SeaWorld that has resulted in the death of a trainer and injuries to other.

The movie Blackfish has invigorated a movement against SeaWorld and has given it such momentum that it now cannot be stopped. There is even a bill before the California legislature to ban performances by Orcas and other species of dolphins.

Strangely enough, this announcement that Bindi is working with SeaWorld once again brought the controversy over SeaWorld's treatment of Orcas to international attention and has helped to keep public attention on the issue of captive cetaceans.

But we need to keep our focus on SeaWorld and this movement does not need to be refocused on a 15-year-old girl who simply wants to educate children about wildlife conservation.

I have great hopes for Bindi in the future and although I do not support her affiliation with SeaWorld, I do support her as a friend and as a person who has already, at her young age, contributed enormously to the conservation of wildlife.