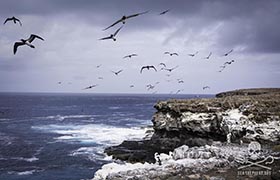 Endangered birds fly at Ileu Raso, watched over by the Brigitte Bardot.  Photo: Sea ShepherdThe MY Brigitte Bardot just returned from a short voyage around the Cape Verde Islands, off the coast of West Africa, where Sea Shepherd and local NGO Biosfera 1 are working on a joint project to protect endangered marine life in this unique archipelago. The Bardot and her crew hosted Tommy Melo, one of the founders of Biosfera 1, on a trip to the local seamounts to survey populations of endangered Cape Verde shearwaters. Very little is known about the feeding habits of these birds that occur nowhere else in the world and are threatened with extinction due to overfishing and direct human predation on the fledgling chicks.

As Tommy predicted, we observed flocks of shearwaters feeding on fish at each seamount. He was happy to have the long-range capability of the Brigitte Bardot to enable him to see these beautiful seabirds at their feeding grounds.

The crew was also happy to be visited by a large pod of Pantropical spotted dolphins. There is nothing better than watching these beautiful and social animals playing freely in the ocean. Several jumped up to deck level to have a good look at who we were.

After two days at sea, we called on Iléu Raso, where we were privileged to see the shearwaters sitting on their nests. Each pair of shearwater adults raises one baby in their cave nests. The birds are extremely vulnerable while on their nests and it is easy to approach them. The fledgling chicks will grow to twice the weight of the parents from baby fat. 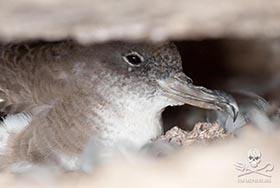 Endangered Cape Verde Shearwater
Photo: Sea ShepherdDuring this time, people come to the island and wring the necks of the fat, fluffy chicks and eat them. As many as 15,000 babies would be killed if they were left unprotected. Until now, Biosfera 1 has been the only group that has had people on the island to protect these endangered birds, but this year Sea Shepherd will be by their side providing a ship and crew to help stand guard over the shearwater fledglings.

Iléu Raso is home to several other critically endangered species of animals. These islands are a model of the world and we can see the effects of humans clearly here. The Raso Lark population consists of only a few hundred individuals, and these birds occur nowhere else in the world but on this rocky islet. The Cape Verde sparrows followed the crew like curious dogs as we hiked around the island. Tommy showed us caves with red-billed tropicbirds sitting on their nests. In the same caves the endangered giant wall gecko lives, eating the parasites from the birds and their cracked eggs. The gecko also only lives on two of the Cabo Verde islets, both of which have protected status — with only Biosfera 1 to ensure that people follow the rules. 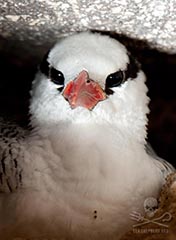 Red Billed Tropic Bird chick in nest
Photo: Sea ShepherdSanta Luzia is a major loggerhead turtle nesting area, and another place that Biosfera 1 has been protecting from poaching. Sea Shepherd will be assisting with this project as well, helping to transport volunteers to the island, counting turtle nests and hatchlings, guarding the eggs and turtles from poachers, and relocating nests when needed.

As with the world, we can all sit idly by as species after species is wiped out by overfishing, habitat destruction and pollution or we can stand up and fight for the animals’ right to live unmolested, to let them have – at the very least – this tiny corner of the world. The crew of the Brigitte Bardot is happy to be working with the passionate and dedicated crew of Biosfera 1 to help make the human impact on Iléu Raso and the neighboring reserve islands of Branco and Santa Luzia a positive one.

The problems in Cabo Verde are the same problems the oceans are facing everywhere. The solution is the same as well: management, enforcement, education and clean up. It is inspiring what Biosfera 1 has done on an extremely limited budget with a small group of dedicated volunteers. Like the islets, they can serve as a model for the rest of the world. Thanks to our multitudes of supporters from around the world, Sea Shepherd and the crew of the MY Brigitte Bardot and the MY Jairo Mora Sandoval are able to help Biosfera 1 in this fight.