Be a Voice for the Dolphins

Commentary by Scott West, Director of Intelligence and Investigations 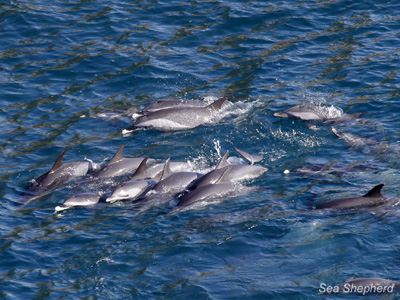 A pod of Pan-tropical spotted dolphins
attempt to escape the killing Cove
Photo: Sea ShepherdIt should come as no shock that the government of Japan is afraid of the truth.  Few, if any, of the world’s governments would be found to be completely open to the truth, or to sharing it, but Japan’s contempt for truth is in a league of its own.  Particularly unnerving is Japan’s claims to have an open and democratic government.

Japanese reporters would feign shock when I made such statements to them as we were standing behind police lines and tarps while the dolphin trainers and butchers of Taiji did their nasty business.  The Japanese media is frequently used as a tool of the government and most citizens in Japan accept the media’s portrayal of any topic as truth.  Luckily this is changing and some Japanese citizens are beginning to see through the media censorship and hype, particularly in the aftermath of the Fukushima disaster.

The lies told by the Japanese government about the extent of radiation leaks are now evident to the people of Japan as well as the rest of the world.  US sailors have brought suit against the Japanese power company for radiation exposure caused by the false information promulgated by the government of Japan.  This government has misspent millions of dollars meant to help citizens who lost everything following the earthquake and tsunami.  Now, Japan is hiding behind their claim that human lives must never be endangered as they manipulate the Ninth Circuit court in the US.  Where was their concern for human safety following Fukushima?

Partial truths and lies are quick to come to their lips.  Japanese ships have been violating the moratorium on commercial whaling for years and are currently in violation of an Australian court order to cease killing whales in the Antarctic Whale Sanctuary.   The biggest lie of all, of course, is Japan’s assertion that their whale killing is research.

Japan accuses Sea Shepherd of endangering human lives, yet the fact remains, in over 35 years of operation we have not harmed anyone and the whalers have never been able to show any complaints or medical records of injuries.  The Japanese whalers, on the other hand, have harmed and endangered our people as well as sustaining death and injury on their own ships by their own actions. Yet it is Sea Shepherd that has been ordered by the Ninth Circuit, at Japan’s request, to stand back.

Other governments are being manipulated by Japan as well. Case in point, the government of Costa Rica, which submitted a warrant for the arrest of Captain Watson in Germany this past year.  Based on partial truths and lies, coaxed from a prisoner, Japan issued its own warrants for the Captain and used those to attempt to manipulate Germany into extraditing Captain Watson to Japan.  Fortunately, the Captain foiled their plot.

Disdain for the truth is also apparent in Taiji, where we see the pathetic attempts of marine mammal trainers and butchers to hide behind tarps and police lines.  We all know what happens behind those tarps and lines.  We see a pod of dolphins ruthlessly driven into the Cove and few are ever seen alive again.  No matter how many tarps they raise or police lines they draw, the world knows that dolphins captured in Taiji are captured in blood and death.  Captured Taiji dolphins are sent all over the world to provide entertainment in marine parks and swim with dolphin programs.

Veteran Cove Guardians are now being denied admittance into the country of Japan.  Of course a nation has the right to control its borders, but keeping out individuals who have committed no crimes and whose only “transgression” is the witness and documentation of the truth of Taiji’s dirty little secret is shameful. We should take pride in these denials for when a “civilized” nation goes to this extreme to hide the truth; it proves that the truth is dangerous.

All of these actions are bringing worldwide attention to the illegal and barbaric practices of Japan’s whalers and dolphin killers.  Those that have been previously passive are now taking action and those that have been active are now engaged.  We presently have the largest number of Cove Guardian volunteers ever in this the third campaign season.  We have more ships and more crewmembers than ever before awaiting the arrival of the illegal Japanese whaling fleet in Antarctica. As the government of Japan slings more lies, the number of those standing against their actions increases, as does the dishonor they bring upon their country and their citizens.

This is your opportunity to stand for what you believe in by expressing your contempt for Japan’s murderous and manipulative ways. As a global community we are tasked with the responsibility of standing against injustice and speaking for those who need a voice.  Join the Cove Guardians in Taiji this February.  This should be the last month of the drive hunt season, but it may last into March.  Let’s overwhelm them with our show of opposition to their illegal and inhumane activities.  For every Cove Guardian veteran they deny entry, let’s place another five Cove Guardians on the ground!

Following is a quote from a future Cove Guardian arriving in Taiji in February:

“I know for me and my partner, we moved from the ‘financial supporter column’ to the ‘personally involved column’ with Paul's arrest. At that pivotal "oh no you didn't” moment we went from supporters to ‘outraged’ activist….Once we saw Japan trying to take Paul directly out of the fight like that, it makes you realize that bodies in the movement are equally if not more important than financial support”.

If you find Japan’s illegal tactics dishonorable and want to become directly involved with our efforts to end the slaughter of our life in our oceans write to [email protected] for an application package, pack your bags, and take a stand for the dolphins, for the oceans, for life.