As the Oceans Choke on Plastic so do the Whales 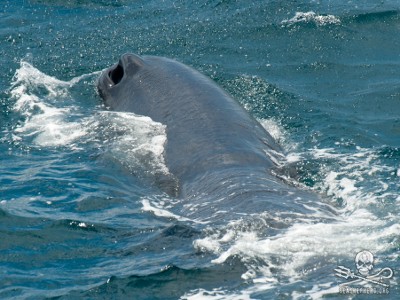 Accidental ingestion of plastics can block a whale's digestive system, leading to starvation and death.
Photo: Erwin Vermeulen / Sea ShepherdOn August 29, 2013, a sperm whale became stranded on Terschelling, one of the northern islands of my home country, the Netherlands. A rescue attempt was undertaken as the whale was still alive when found, but sadly, the animal died. The whale, a young adult male measuring 13.5 meters, was taken to the port of Harlingen for a necropsy. One of the first reported results that the researchers of the Biodiversity Centre Naturalis noted is also one that is becoming increasingly common in these cases - the sperm whale had a plastic in its stomach.

In March of this year, 10-meter-long dead sperm whale that washed up on Spain’s South Coast had swallowed 59 different plastic items amounting to a total of 17 kilograms. Most of it consisted of thick transparent sheeting used to build greenhouses in Almeria and Grenada for growing tomatoes and other vegetables for the European market. The rest consisted of plastic bags, nine meters of rope, two stretches of hosepipe, two small flowerpots, and a plastic spray canister.  The plastic interfered with the animal’s food intake and eventually blocked the digestive system leading to its death. This was not an isolated incident.

In 1989, in the Lavezzi Islands in the Tyrrhenian Sea, a stranded sperm whale died of a stomach obstruction following accidental ingestion of plastic bags and 100 square feet of plastic sheeting. A paper published in 1990 reports that a sperm whale examined for pathology in Iceland had died due to complete obstruction of the gut with plastic marine debris. In August 2008, a sperm whale washed up dead on the beach near Point Reyes, California, with 450 Pounds of fishing net, rope, and plastic bags found in its stomach. In 2008, the California Marine Mammal Stranding Database tells of yet another stranded sperm whale with stomach contents that included extensive amounts of netting from discarded fishing gear.

The sperm whale that stranded in the Netherlands reportedly was missing a large part of its lower jaw. Among the hundreds of thousands of sperm whales that whalers harpooned, they regularly encountered whales with broken or deformed lower jaws. Most of these whales appeared to be healthy and had full stomachs before being slaughtered. This, and the fact that squid found in sperm whale stomachs seldom showed bite marks, led to the theory that the lower jaw might play no significant role in the catching of prey and that the animals instead suck their food in. If this theory is true, their feeding method might make them especially vulnerable to the ingestion of marine debris.

By now, some of the world’s population has heard of the gyres containing “plastic soup.” In particular, the North Pacific Gyre is now estimated to be twice the size of Texas. The public has even seen footage of complete office buildings and unmanned ships, accompanied by every piece of consumer product imaginable, mostly plastic, that the tragic 2011 tsunami launched as a gigantic floating raft of garbage from Japan on a journey across the Pacific.

That type of trash is virtually everywhere in our oceans. Many years ago, I took a boat trip through the three gorges of the Yangtze River, before the dam was built. Styrofoam cups from instant noodles (‘just add hot water!’) had just come into vogue, and an empty one could be seen floating on the surface every 100 meters or so. A third of China’s 1.3 billion population lives along Asia’s longest river that eventually drains its water and its pollution into the East China Sea.

In 2010, I crossed the Pacific on board the SS Steve Irwin from Australia to New York. A day before arriving to the Panama Canal, civilization came floating towards us in the form of balloons, plastic bottles, and discarded shopping bags.

As a mariner, I’ve seen many foreign ports. Especially in developing countries, you can watch the changing of the tides by the movement of rafts of garbage in and out of the bays or harbors. 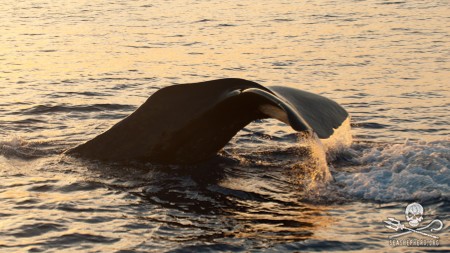 Sperm whales, like most large marine mammals, are vulnerable
to plastic pollution in our oceans.
Photo: Erwin Vermeulen / Sea Shepherd

I spent last month in the Gulf of Mexico on the Odyssey research vessel for the Operation Toxic Gulf campaign, a partnership between Sea Shepherd Netherlands and Ocean Alliance. Garbage could be seen everywhere in the water, floating down the Mississippi River, thrown overboard by fishermen, or washing out from the heavily populated coastal cities of the USA’s southern states.

Being so close to sperm whales on this last campaign, these majestic giants are especially close to my heart, but another family of deep-diving, squid-eating cetaceans that we saw in the gulf are falling victim to trash as well. These are the lesser-known beaked whales.  In May 2011, a juvenile, female Gervais’ beaked whale was found on a beach in Puerto Rico with ten pounds of plastic in her stomach.  In July 2006, a 20-year old female Cuvier’s beaked whale died in Rarotonga, the Cook Islands, after ingesting a single plastic shopping bag.  Sperm and beaked whales are especially prone to swallowing plastic and fishing gear as they mistake these items for digestible prey that they normally feed on. These objects to them resemble their favorite meal of squid, much in the same way that turtles mistake plastic bags for jellyfish.

Baleen whales unfortunately suffer the same fate, not because the trash resembles their food, but because they tend to gulp in large mouthfuls of water while feeding. In October 2008, a Bryde's whale became stranded in the eastern state of Pahang, Malaysia. The necropsy results showed that the nearly 10-meter-long female had swallowed a black plastic bag, a rope and a bottle cap, which blocked her intestine. 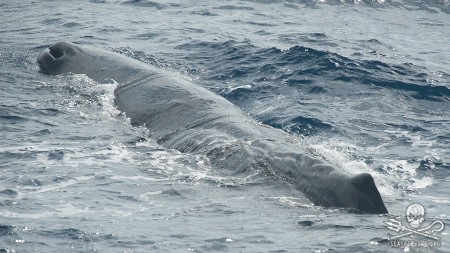 Sperm and Beaked Whales are especially prone to swallowing plastic and fishing gear, as they mistake these items for their favorite meal, squid, much like sea turtles mistake plastic bags for jellyfish.
Photo: Erwin Vermeulen / Sea Shepherd

In August 2000, a necropsy on a Bryde’s whale that stranded near Cairns, Australia, revealed that its stomach was tightly packed with six square meters of plastic rubbish, including supermarket bags, food packages, and fragments of rubbish bags. A shocking video shows the animal dying in agony, which can be seen on YouTube.

A gray whale that died in April 2010 after stranding itself on a west Seattle beach, had a large amount of garbage in its stomach, ranging from more than 20 plastic bags, to small towels, surgical gloves, plastic pieces, duct tape, to a pair of sweat pants and even a golf ball! Plastic garbage cannot be digested and is often not excreted, so it just accumulates in the whale and will, sooner or later, clog their intestines resulting in a senseless and preventable death.

Plastic is not always what kills the whale directly. For sperm whale in the Netherlands, the actual cause of death has yet to be determined. Plastic can also lead to malnutrition and disease. The beaked whale in Rarotonga fell ill after ingesting the plastic bag. “A chain reaction in other organs in her body was the cause of her eventual collapse and death,” said local whale researcher Nan Hauser.  Ingested plastics can also be toxic to the animals that consume them. Persistent Organic Pollutants (POPs) tend to concentrate around microplastics and enter the food web at the lowest trophic level to slowly poison the whales near the top.

Most whales that fall victim to death from consuming plastic and other like objects will die at sea and never be found or examined. The plastics in their stomachs can eventually be released back into the oceans to continue on their destructive path.

It has been estimated that over one million birds and 100,000 marine animals, including mammals and turtles, die each year from plastic debris. We can all do our part by limiting the use, or better yet, not using at all, plastic products like shopping bags, party balloons, straws and plastic bottles. Be a frugal shopper and recycle!

On almost all Sea Shepherd campaigns, we collect trash from the oceans as we sail along. Many local Sea Shepherd chapters organize beach clean-ups. Some people argue that this is not what Sea Shepherd does, but action cannot get any more direct than collecting plastic from the oceans and waterways that drain into them, possibly saving the life of an albatross, a turtle, a dolphin or a tuna with every shopping bag and every balloon that you remove and dispose of properly.  It doesn’t take a great deal of time and it makes a real difference to our oceans and our planet.

To read more on plastic pollution and our oceans, visit: