Another Canadian Fishery Heading for Collapse 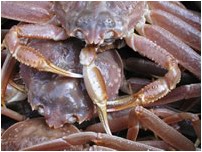 The Newfoundland fishermen, famed for massacring defenseless baby seals and destroying the Northern Atlantic cod fishery, are now energetically working towards wiping out another species.

This time, their greed is impacting the Atlantic snow crab. Currently, the crab fishery is hauling in some $500 million annually and employing about 4,000 fishermen in the Atlantic Provinces. About $300 million worth of crabs are taken in Newfoundland.

The Canadian Department of Oceans and Fisheries (DFO) is seemingly intent upon repeating the same mistakes they made with the cod. The focus being to protect the current profits and not the species.

The Canadian Resource Conservation Council has already warned Canadian Fisheries Minister Geoff Regan that the snow crab populations are not sustainable. "Nobody really knows whether we're headed toward a collapse, but what we do have is a resource in sharp decline in some areas," said John Angel, a fisheries consultant and Canadian Resource Conservation Council member from Nova Scotia.

As it turns out the decline in "some" areas includes the northern Gulf of St. Lawrence; along Quebec's North Shore; near the Cape Breton region of Nova Scotia; and in the waters off Newfoundland and Labrador  That pretty much covers the entire region.
John Angel did say, "We have huge numbers of participants out there with huge numbers of traps, combing through the same stock (populations) over and over again."

The Council also said that there is poor federal management and poor fishing practices being practiced. It's déjà vu. We've been here before. Ah, yes, I remember, in the late eighties and the subject was cod.

"There is no clear, scientific direction, so decisions can be susceptible to bias," said Brad de Young, an oceanographer at Memorial University, based in St. John's.
"It is easy, in that system, to discount bad news, for example, blaming poor catches on bad weather rather than low abundance," de Young said.

Yep, I heard all that before. In fact, East Coast Canadian fishermen have always blamed everything but themselves for the demise of every fishery they have irresponsibly devastated. It's either the weather, or the seals, or the whales, or the foreign fleets, or seabirds, or it was those pesky conservationists.

The fact is, that the annual catch records are set way too high and the limits are set without reference to science. It is the market that sets the limits based on current demand. In other words, as far as the fishermen are concerned: forget the future - show me the money now.

The entire Canadian fish management structure has always been, and continues to be, dictated by economics and politics and not science or conservation management.

Sea Shepherd Conservation Society has warned the DFO that a collapse of the snow crab fishery is a certainty unless strong measures are implemented immediately to prevent such a collapse.

The government must immediately reduce the size of the crab fleet and reduce the number of licenses issued.

The government must provide inspectors and enforce the proper handling of crab. Thousands of tons of undesirable, female, undersized, and soft-shell crabs are being caught, killed, and discarded

A snow crab fishery should not be allowed to operate in areas containing high populations of soft-shelled crabs.

I have little faith in the Minister of Fisheries doing the right thing. His record and the record of his predecessors speak for themselves. These people are not and never have been interested in conservation. They always have been and continue to be corporate whores.

Fred Woodman, the former Chairman of the Canadian Resource Conservation Council from 1996 to 2002, apparently agrees. He praised the latest report by the Council but has little hope that Fisheries Minister Geoff Regan will follow through.
Woodman said he's worked on similar reports on lobster, turbot, and cod.

"The recommendations, I think, are gathering a lot of dust," he said.

Why will the Minister not listen to common sense? The answer is simple. Regan is gambling that the crab fishery will not collapse on his watch and he will be able to pass the problem on to the next Minister.  Secondly, Regan is from Nova Scotia and any action which angers the fishermen will result in political repercussion for Regan.
The government must stop appointing Ministers from the Atlantic provinces. Crosbie, Tobin, Efford, and now Regan have all been disastrous choices for the fish and other marine life because the politicians are more afraid of angry fishermen than angry conservationists.

And they all knew that their jobs are short term. Politicians have no vested interest in long term solutions. The future will always be someone else's problem.

It would be wiser to pick ministers from the ranks of Parliamentary members between the Rockies and the Ottawa River Valley. DFO needs some objectivity and the Department will never get it from politicians who depend on appeasing fishermen for their votes.