Will Woodside Smash the Vatican Chalices of the Goolarabooloo People

The findings include probably one of the biggest dinosaur tracks in the world.  The current record for a Sauropod footprint being 1.5 meters and the ones found off James Price Point are around 1.7 meter long. The narrator of the story goes on to say "an animal with feet the size of truck tires would be 7 or 8 meters high at the hip and at least 35m long. If you think tracks of the worlds biggest Sauropods are impressive, then how about rock-solid evidence of an Australian Stegosaurus? This find is of global importance. Without tracks like these, we would never know that Stegosaurs once existed here." 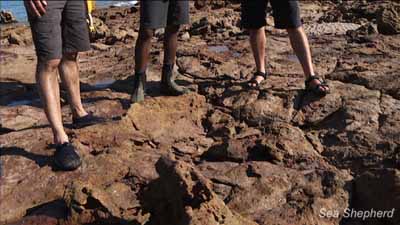 Perhaps the largest sauropod footprint ever found at a size of 1.7 metres.
Photo: Catalyst

Uniquely, the dinosaur tracks here are interwoven with Aboriginal song lines and creation stories. The program has fantastic insights from three inspiring people, Dr Steve Salisbury who is a Paleontologist from the University of Queensland, Louise Middleton, Dinosaur tracker from Broome, and Richard Hunter, senior law boss and traditional custodian of the Goolarabooloo people.

Richard Hunter states, "Well, the footprints are like our ancestors, yeah? They were the first... the first living thing in this country. You know, we have a song line... We're talking about culture - once they break the song line, well, then we have nothing."

Louise Middleton states, "When I found it I realized instantly the significance of it, and I just literally fell on my knees and cried, because I felt that if we can't save James Price Point with these tracks then we'll never save anything. Breaking that song line, it's like someone going into the Vatican and smashing the chalices or vandalizing the altar - that's the significance and the strength of these dinosaur footprints. They're the creation beings, and to interrupt or destroy that is spitting in your soul."

Dr. Salisbury says, "There's nowhere else in the world you can come and wander along these beautiful beaches, and come across some of the most important dinosaur tracks anywhere on the planet. It should be conserved in its entirety. There's a whole scientific story that we're only just beginning to understand that requires knowledge of all the track sites together and linking all of them to try to understand the overall context of everything. I mean, you can do dinosaur ecology here. The entire 200km of dinosaur coast is worthy of protection as world heritage."

Would we allow someone to desecrate the Vatican, no, of course not and neither should we allow Woodside and the joint venture partners BHP Billiton, Shell, Mitsubishi, and Mitsui, to desecrate dinosaur tracks that are found nowhere else on Earth, that represent the local people’s ancestors, their culture, and their song line. If Woodside and the joint venture partners take that away from the Goolarabooloo people, they leave them with nothing.

The gas hub can go someplace else, but the world’s largest humpback whale nursery and these dinosaur tracks, that are found nowhere else on earth, and are linked to the song line and culture of the Goolarabooloo people, cannot!

At a public meeting in Broome, Dr. Steve Salisbury explains why we should care about the dinosaur trackways.
Read the full story: Kimberley Dinosaurs - ABC TV Science 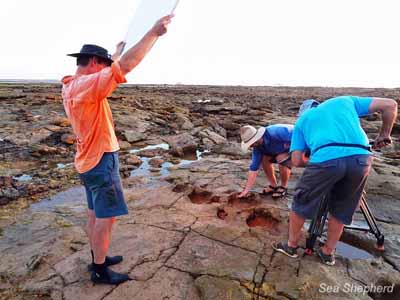