Where oh Where are the Whalers Going? 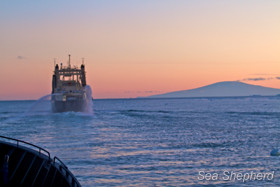 The Nisshin Maru forges ahead with the picturesque Mt. Siple in the background (photo: Gary Stokes)Mount Siple is the third largest mountain in Antarctica, and a sight we have not seen before in the seven voyages we have made to the Southern Ocean Whale Sanctuary. The reason we have not seen it is because never before have we had cause to venture outside the boundaries of what the Japanese have designated as their official whaling grounds.

The easternmost border of their butchering grounds is 145 degrees west. The Nisshin Maru and the Yushin Maru No. 3, with the Bob Barker and the Gojira on their tail, are now at 122 degrees west and 72 degrees south. This is some 3000 miles southeast of Hobart, Australia, and only 1700 miles southwest of Puntarenas, Chile.

This is 400 nautical miles east of their hunting grounds and they still continue to race eastward for no apparent reason. Perhaps they think they can run the Bob Barker out of fuel. If so, they will find that the Bob Barker with its huge fuel reserves can more than outmatch them.

The whereabouts of the Yushin Maru No. 1 and Yushin Maru No. 2 are unknown but of little consequence. Without the Nisshin Maru factory ship, the harpoon vessels are useless. They can’t kill whales if they can’t unload the carcasses to that foul floating abattoir.

The Japanese whaling fleet has had a disastrous season so far. Sea Shepherd caught them before they even began killing whales, and for the entire month of January, two of the harpoon vessels could not kill a single whale as they were tailing the Steve Irwin and the Bob Barker. During this time, the factory ship and the remaining harpoon vessel were running most of the time and only managed the get in a couple of days whaling before the Steve Irwin intercepted them in late January, putting them on the run again. The Nisshin Maru managed to escape pursuit through ice, and managed only a few more possible whaling days before the Gojira rediscovered them, and the Bob Barker gave chase. Now they are running well outside their whaling grounds. We don’t know exactly how many whales they have killed, but we do know it has not been many.

Spirits are running high onboard the three Sea Shepherd ships. The knowledge that hundreds of whales have been saved, yet again, for another year is very motivating.

“We’re making a difference down here,” said artist Howie Cooke of Byron Bay, Australia. “Knowing that whales will live that would otherwise have died makes me feel very happy. Our crews have been awesome this year and I think we have made the whalers very angry and very frustrated.”

Where are the whalers going? It really does not matter as long as they are not killing whales. With just over a month to go in the whaling season, the Sea Shepherd crews are confident that by keeping the Nisshin Maru running, whaling will not resume as long as we can keep a Sea Shepherd ship guarding the stern of her slipway.

The Nisshin Maru forges ahead with the picturesque Mt. Siple in the background
(photo: Gary Stokes)