Now I don’t begrudge Greenpeace and their right to do things their way but when I am stopped on the streets in Melbourne last March and asked to donate money to send a Greenpeace ship down to Antarctica to defend the whales, I was course very inquisitive.  The couple with the clipboards in hand did not recognize me, so I asked when was the last time Greenpeace had a ship in the Southern Ocean?

They told me that two Greenpeace ships had just returned from saving whales.

“You mean the Steve Irwin and the Bob Barker?” I asked.

“Really,” I replied, “I believe those are Sea Shepherd ships.”

“Yes,” the woman said, “but Sea Shepherd is part of Greenpeace.”

Defensively she said, “Yes it is!”

It was then I introduced myself as the Captain of the Steve Irwin and the founder of Sea Shepherd Conservation Society.  She suddenly looked a little frightened and said, “I just work for Greenpeace and they told me to say what I said.”

If this was a something that happened this once, it could be seen as a mistake but other members of my crew have had similar conversations with Greenpeace canvassers on the streets of Paris, Washington D.C., and Perth, Western Australia.

And today I received the following internet message from Greenpeace:

As you read this note, the Japanese whaling fleet is steaming towards the Southern Ocean to begin their annual whale slaughter. Their planned death "quota" this season: nearly 1,000 Minke whales, 50 humpback whales, and 50 endangered fin whales.

We must stop this massacre now!

During the 2008 campaign, then-Senator Obama said, "As president, I will ensure that the U.S. provides leadership in enforcing international wildlife protection agreements, including the international moratorium on commercial whaling." Three more whaling seasons have come and gone since Obama spoke those words, and no change has been made.  Please rush your most generous contribution as we put pressure on President Obama to fulfill his campaign promise.

Captain Paul Watson: President Obama was the first President since Ronald Reagan to attempt to compromise with the Japanese whalers. Greenpeace backed his compromise deal at the IWC, a deal that would have legalized whaling. Fortunately the compromise motion was defeated. Obama will not end whaling but Sea Shepherd can end whaling through direct intervention and reduction of the kill quotas. Greenpeace refuses to recognize the success of Sea Shepherd’s campaigns and condemns our tactics. What I don’t understand is how sending your “most generous contribution” to Greenpeace is going to force Obama to fulfill a campaign promise that he has already reneged on.

"Allowing Japan to continue commercial whaling is unacceptable," as President Obama himself has stated, and Greenpeace is rallying support to put a stop to the slaughter, once and for all.

Captain Paul Watson: I have no idea what this means. Of course it is unacceptable but President Obama was ready to legalize some whaling in return for Japan cutting their Southern Ocean quota in half despite the fact that Sea Shepherd had already cut that quota in half the last season.

Commercial whaling is not only unacceptable—it's a violation of international law.

Picture a Japanese harpoon ship speeding through the Southern Ocean. Suddenly, the harpooner spots a mother whale and her calf. The sounds of the ocean are drowned out by the blasts of exploding-tip harpoons being fired at the whales.

Captain Paul Watson: We don’t need to picture it John. We’re down there as and where it happens. The question is where are the Greenpeace ships?

The pair struggles to free themselves from the harpoon lines for nearly an hour, desperately thrashing their tails in the water, before a gunman finally steps onto the deck and shoots them dead. The mother whale and her baby are dragged up the ship’s slipway, leaving a long trail of blood behind them.

Much to our frustration, in a few days time this tragic scene will play out in the Southern Ocean over and over again. Greenpeace needs your help, and the help of President Obama, to put an end to the slaughter of our oceans’ most unique, intelligent, and emotional creatures.

Captain Paul Watson: If you are frustrated John then send some ships down to the Southern Ocean like you once used to do. So people send you a contribution, but what are they getting in return? Are you going to lobby the President of the United States to stop Japanese whaling? How much is that going to cost? Surely not that much. We know Greenpeace collects millions of dollars on appeals to save the whales, surely some of that money could go to sending a ship. You have a ship not far away up in Indonesia – how about that one?  Come on John, if you were really angry, if you were really frustrated, we would be seeing some Greenpeace action in the Southern Ocean Whale Sanctuary from you. But, we are not seeing it John. I could suggest that you partner with us and help fund our actions but I know you don’t like the way we save whales so that is not going to happen. But please John, spare us your cries of frustration. You have no intention of doing anything do you?

Please help us stop this terrible massacre and save the lives of these whales with your most generous donation NOW!

Captain Paul Watson: Sea Shepherd is trying to John; we’re sending 88 volunteers and three ships down to the Southern Ocean right NOW to intercept the Japanese whaling fleet. We really could use some help John and a little assistance would be greatly appreciated, or at the very least stop siphoning away much needed funds with these mass mailings and appeals requesting funds for something you are not doing anything about. We have a team in Taiji John. Where is Greenpeace? We were recently in the Faeroes. We did not see you there either. We have been working in the Galapagos for a decade and not once has a Greenpeace ship shown up there. We saw two of your ships in the Mediterranean last June but when we asked your Captains if they wanted to help us free Bluefin tuna from the nets – they refused and ran away. Yes the time to stop the “terrible massacre” is now and so I ask again – where are your ships John?

Together, we can let Japan know that commercial whaling has no place in the 21st Century.

Captain Paul Watson: Yes we would love to be able to do that together with you John. The problem is that you’re staying at home and sticking your money in the cookie jar and the whales need you NOW!

Captain Paul Watson: You mean for Greenpeace don’t you John? 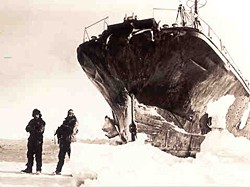 Paul Watson and Bob Hunter in front of sealing ship in 1976 during the first Greenpeace
seal campaign
I am not anti-Greenpeace. As a cofounder of Greenpeace and a former Greenpeace campaign leader I was once quite proud of Greenpeace. But the people running Greenpeace now are not the people that created the organization. What we have now are bureaucrats who have lost sight of our original objectives. Greenpeace has gone mainstream and as this letter reveals they are turning to political lobbying instead of direct action on the high seas. They have replaced their seat in the Zodiac inflatables for seats behind their desks.

No, I am not anti-Greenpeace but I am anti what Greenpeace has become.

Not once has Greenpeace intervened against the slaughter of the dolphins at Taiji or the killing of pilot whales in the Faeroe Islands. They deserted the whales of the Southern Ocean in 2007 and have not returned since.

Greenpeace accuses Sea Shepherd of being “violent” although we have never caused a single injury to any person in our entire 33-year-history.

I would welcome Greenpeace ships to the Southern Ocean and once we find the fleet we would happily give them coordinates for them to join us. I would willingly cooperate with them to defend the whales. But they refuse to cooperate with us. In fact they refuse to even get involved, well except for the fund raising part. They seem to be very good at raising money but not very good at spending it for the objectives they originally raised it for.