Where Have All the Turtles Gone?

Those defending the exploitation of the eggs argue that these are poor people just trying to feed their families. However, the sea turtles here are poor mothers of a species trying desperately to survive. In a decade, when the turtles are gone, the “poor” will no longer be able to plunder what is no longer there, and the world will be far poorer with the loss of the turtles.

Poverty must not be an excuse or a justification for driving a species to extinction. What these people are doing is wrong. I am sure that the government of Costa Rica would not stand idly by and watch the poor walk into banks and take what they want. Robbing banks and robbing sea turtles of their eggs are both crimes, so why is poverty the justification for one crime but not the other? Although legal under Costa Rican law, robbing of the turtles is a crime against nature and humanity, with far more significantly negative consequences than the robbing of a bank of some paper currency. 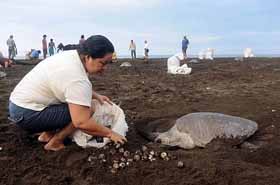 The eggs these people are gathering will not be eaten by them. These eggs will be shipped to China to enhance China’s “food culture.” “Food culture” is the new word coined to justify the consumption of endangered species and implies that any criticism is akin to racism. Thus, any accusation of dolphin, whale, or tuna consumption in Japan, or shark fin or turtle egg consumption in China, is now conveniently dismissed as racist and implies non-tolerance of their “food culture.”

Our choice is to kowtow to this manipulation, shut our mouths, and do nothing, or to dismiss it as ridiculous and irrelevant and focus on the more important issue of biodiversity diminishment. Words like “sustainable,” “green,” and “eco-friendly” are just smoke screens for the continued destruction of life in our oceans. There are simply not enough fish, turtles, dolphins, whales, or seals to feed the ever-expanding populations of humanity.

What these people on the beaches of Costa Rica are doing is criminal. Each and every one of them is a foot soldier in the war against nature, and ultimately against the interests of our children and ourselves.

The Costa Rica Tourism Board (CRTB) has responded to these photographs by saying that “the images actually represent a model of sustainable development” and that the harvest of sea turtle eggs has the approval of the Costa Rican government. According to the CRTB, many of the eggs would otherwise be destroyed by the turtles themselves as they return to the sea, so these people are simply harvesting eggs that would otherwise be destroyed by the mother turtles. The CRTB claims that this represents a “rational” utilization of the turtle eggs. Talk about a spin!

And we need not worry, because Costa Rica has assured us that the turtle eggs are packaged with an official government stamp of approval.

So what we have is business as usual, except that the poachers are now government approved, and the Chinese get their turtle eggs with a green tag saying these are sustainable eco-friendly turtle eggs, because the Costa Rican government says so.

This is conservation Costa Rican style. After all, Costa Rica is the most environmentally friendly conservation activist government in Central and South America, because the Costa Rica Tourism Board has assured us that they are.

Turtle eggs laid by female turtles on Costa Rican beaches should be left alone, and there is no reason for any person to steal these eggs for commercial purposes. The Chinese do not need to eat turtle eggs, and Costa Ricans should not be selling them.

In other words – leave the poor turtles alone already, and take your ridiculous words like “sustainable” and “rational use” off the table. There is nothing sustainable about stealing eggs, no matter how stupid these public relations whores think we are.

What you can do

Contact the U.S. Embassy in Costa Rica and the Embassy of Costa Rica in the U.S. and tell them you oppose Costa Rica’s immoral sale of endangered sea turtle eggs to China. 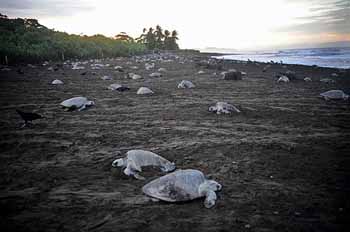