Upon arrival we casually walked in and arrived at their second floor reception lobby only to discover a line of 300+ potential new airline staff, lined up for their interviews (our visit coincided with the airlines recruitment day!) We approached a staff member in the lobby and asked to speak with Ms. Catherine Yick, the Corporate Communications Manager and were politely told to wait. The staff obviously had no idea who Sea Shepherd were and probably were not even aware of the dolphin crisis about to hit them. After handing over my business card, they obviously hit Google to see who we were and then the mood changed somewhat. 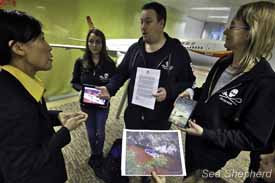 Sea Shepherd Volunteers deliver a petition and letter of protest to a Hong Kong Airlines representativeWe were asked to move to another area where we could wait, however we chose to stay put in their lobby, as “we were just here to drop off this letter, petition and DVD it would only take a few moments.” All the time potential staff were filing past us with the kids holding images from the cove slaughter standing in front of the large model aircrafts in the lobby. As time rolled on and certain calls to the authorities had obviously been made, I asked Danielle to take the youngsters out and Rehouven and I stayed put. Emotions started to rise with one of the airline staff, who resorted to calling us thugs and punks, charming! We continued to stand politely and peacefully, awaiting someone from management who could accept the letter. It was like a hot potato that nobody wanted. One man, who appeared from his causal attire to be off duty, took charge and ordered no one to talk to us. He then ushered us into an interview room just off the lobby. We sat down and he asked what our intentions were. I asked him whom it was we were talking with, and he replied, “that’s not important!” I explained that I was here to talk with management and that if he was not going to introduce himself, we would go back and wait outside. I imagine his ploy was to keep us talking in the room until the police arrived. I got up and moved to the door where the previously infuriated employee made a move towards blocking the doorknob, but thought better of it! Rehouven and I resumed our position back in the lobby, silently.

Eventually the same guy came back and said that he was now authorized to receive the letter, DVD and petition. I asked him for his card so I know whom we had delivered, which he eventually handed to me. He then escorted us out, and whilst in the lift expressed that “this was not the conventional way to do this!” I replied to him that, “if you take some time out later, you’ll realize we don’t always do things the conventional way, but we get the results!”

Since dropping off the letter, the support has been resounding. The petition passed the 5,000 target in just three days and still continues. At the time of writing this were about to reach 6,000 and climbing rapidly.

We have received two replies from Hong Kong Airlines directly and Captain Paul Watson, Scott West and Jeff Hansen have been kept in the constant loop of what is going on here in Hong Kong. These results have been possible because we all pulled together for the dolphins, and I’d like to personally thank Sandy McElhaney of Save Misty the Dolphin, Samuel Hung of the Hong Kong Dolphin Conservation Society, Janet Walker of HK Dolphinwatch and of course the guys from Sea Shepherd Hong Kong, (Danielle, Rehouven and the young future Sea Shepherds)

Personally I see this incident as something far bigger than just Hong Kong Airlines, this is the crack in the dam that we have all been waiting for. This action should send a message to all airlines that the consequences of transporting dolphins will result in such global negative publicity affecting a loss of business that will far outweigh any short-term financial gain from the transfers. If we can stop the international transportation, this should then stop the captive trade and therefore if no dolphin trade, no dolphin slaughters as the money will have disappeared. 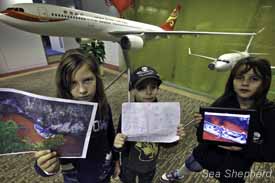