Under the Naked Light Bulb for the Seals

Under the Naked Light Bulb for the Seals

In April Sea Shepherd 1st Officer Peter Hammarstedt of Sweden was illegally taken prisoner by an armed Canadian government team that boarded and seized the Dutch registered ship Farley Mowat in international waters. He was charged with the terrible crime of approaching a place where seals are being slaughtered without government permission. Apparently witnessing or filming the slaughter of seal pups is now considered by Canada to be an act of "eco-terrorism."

Peter's description of his interrogation is amusing in many ways but it is also very serious because it illustrates just how delusional the Canadian authorities are about this issue. They have convinced themselves that opposition to the killing of seals is on par with the policies of Osama Bin Laden.

Peter was released from prison after Captain Paul Watson and Canadian writer Farley Mowat posted his bail with 2500 Canadian two dollar coins. Because the Canadian dollar is called a loon, the $2 coin is a double loon or doubloon - a fitting way to pay a ransom to these pirates.

Peter was then deported to Sweden and will be put on trial in about a year's time for the "crime" of witnessing a seal being killed. He faces a year in prison and or a fine of up to $100,000.

Captain Alex Cornelissen was also arrested and charged and faces the same penalties if convicted.

However Sea Shepherd is confident that the case will be won because the evidence will prove that the ship never once entered the 12 mile territorial limit. 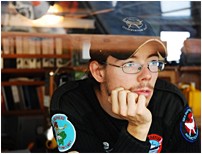 Should you in one instant find yourself sailing in international waters, documenting fisheries violations at the annual seal slaughter in the Gulf of St. Lawrence, and in the next instant, find yourself being dragged away under the threat of firearms by an elite tactical response unit from the Royal Canadian Mounted Police (RCMP), there is only thing left for you to do - use your Constitutionally-protected right to remain silent!

In Canada, the police are forbidden to use violence or physical intimidation to extract a confession, so they rely entirely on psychological techniques that have been perfected and tested over time to make the ‘interviewee' feel insecure, isolated and afraid. Their primary goal is to get you to talk. When there is little physical evidence to go on, and no witness testimony to rely on, the police are completely dependant on what is said in interrogation to further a police investigation and build a case around you. In over 90% of judicial cases, the primary evidence used to convict a suspected ‘law breaker' is what is said during interrogation.
But thankfully, you don't have to say anything at all. Your right to remain silent means just that - you have the right to remain silent. You don't even have to say ‘no comment' or explain that you've decided to remain silent. And your right to remain silent begins the moment you're confronted by the police, even before your rights have been read to you.

As soon as the RCMP pushed me to the deck at gunpoint after illegally boarding the Farley Mowat in the Cabot Strait, my lips were sealed, and that silence continued until I was released on bail.

When interrogated by the Serious Crimes Unit for allegedly filming a seal being skinned alive, I shut my mouth, looked at my feet, and bunkered down for what I knew would be a long haul. I was put in a small concrete room, furnished with a table, three chairs, and a bookshelf. Oh, and a video camera that would continue to roll tape even when the officers stood outside of the interrogation room, presumably to get a read on my body language. By looking at my feet, it was impossible for the interrogators to read my facial expressions or reactions to the questions posed; body language can sometimes be read more easily than speaking and the police are experts at deducing its many connotations.

Human beings are social creatures. After spending any amount of time in isolation, the natural urge of any reasonable person is for social interaction. Interrogators know this, so like an old episode of Columbo, I was first praised for being a ‘person of conviction.' The two officers alone in the room with me were ‘my friends' and I was encouraged to speak to them as such. We were on a first name basis. They had kids of their own; one even had a son just like me. But like a rock, I continued to sit quiet, remembering that once a person starts talking, it's difficult to stop. Besides, how could those trying to put me in prison for allegedly trying to stop the single largest slaughter of marine mammals in the world be my friends? Like most interrogations, mine began with classic ‘good cop, good cop' theatrics.

I was then made to feel guilty for being quiet; even though the first thing mentioned in the interrogation was that I had the right to remain silent. I was told that I was disrespectful and immature - that I was offending them. The police counted on a very natural reaction to being directly confronted with an accusation - that I would try to defend and explain myself. But once again, I kept quiet, remembering that the place to defend my actions was in the media and in a court of law, not to two police officers in a cement box whose only job was to extract a confession.

By that point, an hour had gone by, and we moved on to stage two in the interrogation - ‘good cop, bad cop'. One of the officers, ‘lost his temper', and I quote this because it was purely theatrical, although it felt very real at the time, and stormed out of the room. The second officer then tried to comfort me, explaining that his colleague "was just trying to understand." I was encouraged to talk to him instead - he offered me a drink and food. All the meanwhile, the ‘distempered' officer watched the proceedings from a television screen in the other room. Again, I kept silent.

A few minutes later, the ‘bad cop' returned, shoving a table aside, removing my hat from my head, and yelling, "when I look at you, I see a twelve-year old Palestinian boy with a backpack full of nails walking into a shopping centre in Israel. Are you that boy!? Are you!?" It was enough for me to almost forget for an instant that the only thing that I was being charged with was allegedly being within 950 meters of a barbarian butchering a defenseless seal pup. I was then told that the only reason that I would have to keep quite was "if I was planning something like the next 9-11." Again, I was confronted with such outrageous statements that my natural urge was to defend myself, but I continued to remain silent knowing that it was all just a ploy to get me to start talking. Besides, behind my stonewalled expression, I was fuming on the inside, and I knew that anything that I would have said at the spur of the moment would have been ill-thought out and purely emotional.

I was told that the police already had all of the evidence that they needed to convict me, although I knew that they wouldn't be wasting three hours questioning me if that were the case. Oftentimes, the harder the interrogator, the less information the police have to go on. And so, we moved on to stage 3, ‘bad cop, bad cop'. When all else fails, the police draw out on the interrogation for as long as they can, and believe that if they yell enough terrible things at you, you'll eventually crack. Typically, if you don't know your rights, it's very effective. You're made to feel that the only way out of the situation, is to ‘cooperate'. The distempered officer yelled,"you're like a prisoner of war. You just say your name and your rank. But even prisoners of war say what they fight for. They say, ‘I'm fighting for freedom, I'm fighting for American, well, what the Hell are you fighting for!?" Knowing full well that the protocol for any soldier captured in war, in Canada as most any country, is to just give name and rank, I saw this lie for what it was, another futile attempt at gathering information.

By now, three hours had gone by. I was tired. I was frustrated. But I knew that it would be over soon. And I knew that if I started talking then, it would never end as it would give the interrogators hope that they could get me to say more. After storming out of the room for a few minutes, the ‘disgruntled' officer returned for the second time. He was there to give me one last chance to talk. He ‘just' wanted me to answer once last question - "was I using my right to remain silent". He ‘just' wanted a yes or no answer. Either answer would do and then it "would all be over." Otherwise he could continue for another few hours, or so he claimed. I called his bluff, said nothing, and two minutes later he said that I was free to go. Before leaving the interrogation room, he asked me if I had anything that I wanted to add, although there wasn't anything to add to my name and address. I desperately wanted to yell "Free Palestine", but chose instead to keep my head down and walk out. One day later, I was released on bail, free to continue fighting for animals and the Earth.

I just want to add, that even though I had committed no crime, I chose to remain silent. I saw no point in defending my innocence in interrogation; the physical evidence of the trial will exonerate me and my codefendant. Regardless of whether or not you are guilty or innocent, it is always best to remain silent. Words and statements can easily be twisted and are always subject to interpretation. And interrogations are excellent places for the police to gather intelligence. It is every activist's responsibility to know his/her rights. The animals and the Earth have more to gain with you out of prison than in prison. So know your rights, keep your mouth shut, and fight to win.

And remember the age old adage, "nobody talks, everybody walks."