Trek Through Europe – Report from the road

Trek Through Europe - Report from the road

Note: Captain Watson is currently traveling in Europe to speak about Sea Shepherd, bring awareness to Sea Shepherd's campaigns to defend ocean wildlife, and meet with local supporters.  His trip began in France with an invitation from Quiksilver Europe to give a presentation, show video and discuss further opportunities for Quiksilver to work with Sea Shepherd to support our mission.

We landed in Paris on Tuesday morning and spent the day and the night at the hotel at the Charles DeGaulle airport waiting for the Wednesday morning connection from Orly to Biarritz in the extreme southwest of France on the Spanish border.

We arrived just in time. A few hours later the Biarritz airport was closed for hours because of a bomb threat by the Basques Separatist group ETA. This was in response to the arrest earlier in the day of the underground leaders of the ETA. Missed the drama but made it to the town of Bidart and the European headquarters of Quiksilver.

I was there with Sea Shepherd Executive Director Kim McCoy, International Director Jonny Vasic and Development Director Alex Earl to speak to a gathering of hundreds of Quiksilver employees about Sea Shepherd's mission to protect Marine wildlife and ecosystems around the world through non-violent direct action.

It was wonderful to see the Sea Shepherd Jolly Roger flags and banners flying not only at the Quiksilver European headquarters but also in the main square of the town of St. Jean de Luz. Quiksilver also shaped a few special Sea Shepherd surfboards for us.

We gave a presentation that evening that included our short film "30 Years on the Frontline" which received a standing ovation, and met Quiksilver representatives from across Europe. We spoke about the need to protect our oceans and how the Sea Shepherd line of products that Quiksilver is marketing will help us to raise much needed funding for our campaigns at sea. I signed and sold a good number of copies of Ocean Warrior and Seal Wars and we had a late dinner on the beach with the some of the core Quiksilver Europe team. The Sangria was superb.

The Sea Shepherd Conservation Society has been reaching out for alliances with the surfing and the scuba diving communities for years and this alliance with Quiksilver is greatly increasing our global effectiveness.

Our arrival in France coincided with the publication of the popular magazine VSD, one of the major French photo news magazines that this week features a four page colour spread about Sea Shepherd entitled: Le Pirate Ecolo - Heros ou ecoterroriste? Despite the title it is a very positive article.

On Thursday, I did an interview with the French language surfing magazine Beach Brother for a story to be published in the near future.

We then drove to San Sebastion across the Spanish border to catch a plane for Madrid and to await a connection to Amsterdam to continue our awareness tour through Europe. 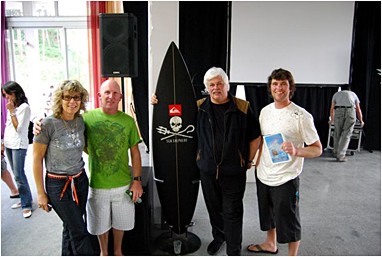 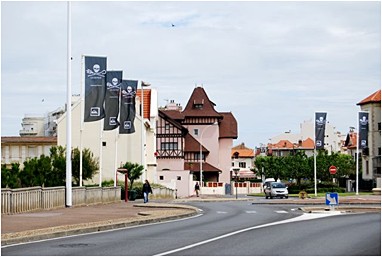