Three Months of Horror at the Cove

We do fault the choices made by the men and women intimately involved in the dolphin hunt, slaughter, trade, and entertainment industries. These are individuals who experience firsthand the devastating impacts of their actions, yet continue to engage in them. They may justify their actions in their own minds by buying the malarkey that what they are doing is so-called cultural, or they may ease their consciences with the time-honored excuse of ‘I’m only doing my job.’  However, there is not one legitimate argument or reason for harassing, capturing, enslaving, or slaughtering (molestation) of cetaceans. 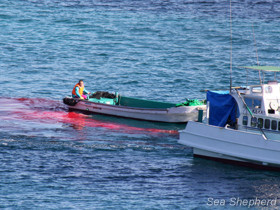 The dolphin molesters in Taiji and elsewhere in Japan, and the dolphin molesters involved in the captive dolphin entertainment industry the world over, do not deserve our concern and certainly not our respect.  At best, they deserve our pity, but more appropriately, they deserve our contempt. While we do not want to see them injured, it is certainly acceptable to make them uncomfortable while they go about their so-called business. To make them squirm under the scrutiny of an unsympathetic public is better. To give them so much grief that they find a new line of work would be priceless.

I spent three months in Taiji, and in honor of the promise Sea Shepherd has made to the Japanese police, I did not cut any of their nets. I operated within the confines of Japanese law. I also took every opportunity afforded me to record the shameful acts of these despicable individuals and to hound them with my camera. They recoiled from the lens as evil recoils from the light. I look forward to returning to Japan at some point so I can once again shine light on the evil that is in Taiji.

Taiji in general, the Cove in particular, are two extremely evil places. One can feel it in the air, the soil, and certainly in the water. At first view, there is a breathtaking natural beauty to the town, but in time, and certainly after one has witnessed unspeakable misery and horror that the men and women inflict there, the place is always seen for the ugly truth it represents.

The place itself is not beyond redemption. The innocent citizens of Taiji who must endure the shame that a handful of their neighbors bring to their doors are certainly not evil or ugly. What of the men and women who choose to molest the dolphins or choose to support these sins? Is redemption possible for them? Who cares? All that matters is that they cease their evil deeds and almost anything any of us can do to bring that about is welcome and encouraged.

As for those who choose to attack Sea Shepherd or myself for our actions and attitudes, listen closely for we simply do not care what you think. We do care what the dolphins think, and while they may wonder at our reluctance to break Japanese law, I can assure you that they are not terribly upset when we appear to say something that might cause a dolphin killer to cry.

Read daily updates from our Cove Guardians now in Taiji