There is Something Very Rotten in Denmark

There is Something Very Rotten in Denmark

What a piece of work is a man, how ignoble in reason, how
finite in faculties, in form and moving how crude  and
contemptible, in action how like a destroying demon, in apprehension how like
a cruel god! the scourge of the world, the most monstrous
of all animals-and yet, to me, what is this quintessence of dust?
Mankinds foul butchery delights not me, nor the living things of the Earth,
nor woman neither, though by their cynical smiling, the Danes seem to say so.
-          Shakespeare revised for modern times.
-          Torn from Hamlet and butchered by the author to illustrate a point.

My mother was Danish and her father Otto Larsen was a famous Danish painter. His sister was the first woman judge in Denmark and our family on my mother's side, were proud of their Danish heritage.

I however cannot be proud of Denmark. It is a nation that supports and encourages gross cruelty to whales and seals and it is a nation that is contributing greatly towards the extinction of many species of animals.

Denmark is "courageously" defending cartoons from fundamentalist Muslims but seems to be unconcerned about the wholesale slaughter of marine wildlife species. 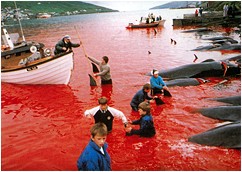 I have seen the bays of the Faeroe Islands stained red with blood and I've heard the screams of mortally wounded whales pleading for their lives as insensitive brutes drunk on slaughter are showered in the hot blood of the whales, laughing and swearing as their vicious blades rape the whales repeatedly. It is a monstrous spectacle and it is an obscenity fully embraced by the Danish government and many of the Danish people.

The massive Danish industrialized fishing industry is scouring the North Sea clean of sand eels, the tiny fish that are the staple for the comical puffins. The sand eels are ground into cheap fish meal to feed factory farmed chickens in Denmark. If the puffin goes extinct then Denmark will bear the greatest burden of the blame for the tragedy of trading the beautiful and lively puffin for a few chicken McNuggets.

Denmark supports the killing of whales and seals in Greenland including endangered Fins and Bowheads. And now Denmark is openly attacking the European Union for defending the great whales from illegal Japanese, Icelandic and Norwegian whaling activities.

Last week (June 5th) the European Union agreed on a common position to support the continuation of the global moratorium on commercial whaling. The European Union will present a united front at the annual meeting of the International Whaling Commission (IWC) in two weeks.

Denmark however has decided to be the sole European Union member to exclude itself from this united front.

"With this decision the European Union can now take a strong role at the International Whaling Commission and use all its political, moral and economic weight to ensure a more effective protection of whales worldwide," said Environment Commissioner Stavros Dimas.

Denmark responded to this statement with hostility calling the move "cultural imperialism."

Denmark does not openly support commercial whaling, although it supports whaling in the Faeroe Islands and Greenland - which, while part of the Danish Kingdom are not part of the European Union.

"For 20 years, Denmark has held the same position in support of these other parts of the kingdom," said Ole Samsing, a Danish diplomat to the European Union who is also the country's IWC commissioner.

"It is cultural imperialism trying to decide on behalf of these people who are not in the European Community," he said.

When did concern for the environment and the protection of species become "cultural imperialism?"  This is a ridiculous accusation from a country whose only claim to fame lately has been to publish cartoons depicting the prophet Mohammed with a bomb in his turban. Such is the cultural ignorance of the cartoonists that they did not know that Arabs do not wear turbans. Yet Denmark has defended the cartoons and Danes have expressed their belief that Denmark is defending Christian values in the face of Muslim extremism. This smacks more of cultural imperialism than the legitimate concern of European nations to stop the illegal killing of whales.

Defending the rights of cartoonists as champions of Christian values while endorsing the illegal slaughter of whales and dolphins displays a warped sense of moral values.

Last month, the European Commission asked EU environment ministers to speak up for the whales in response to the resumption of illegal Icelandic whaling. At the time, the commission called on Iceland, which remains outside the EU, to prove that it is not engaged in commercial whaling.

Since 2006, when Iceland resumed its illegal whaling activities, it has claimed the killing is only for scientific purposes. The European Commission is dismisses this as a legitimate whaling activity with only Denmark supporting the Icelandic position.

Copenhagen announced in mid-May that it would invoke a rarely used measure, 'Declaration 25' an annex to the Maastricht Treaty. The declaration refers to member states that have territories outside the EU - as is the case with the Faeroe Islands and Greenland - and will allow Denmark not to be bound by the common position.

Mr. Samsing pointed out that the common position actually masks what is more of a mosaic of positions amongst EU member states. Viewing the animals, as with great apes, elephants and dolphins, to be more intelligent and socially complex than other mammals, "there are those member states that do not want any whales to be killed ever - no matter what," said the Danish diplomat.

"But then there are other member states who want to protect whale species from extinction, but once they are not endangered, the would have no problem with a resumption of the whale hunt," he added, "so long as it was done under strict conditions."

As a result, he said, the common position is agreed only for the purposes of this one IWC meeting, and no further.

"But of course, the commission will come up with something similar next year, and then we have to go through the whole rigmarole again."

What Mr. Samsing is saying here is that Denmark does not support the protection of the whales for any reason including if they are endangered.

For its part, the commission dismissed suggestions of imposing its will on anyone: "The common position was made by the highest body [in the EU], and was supported by most member states," said the commission's environment spokesperson, Barbara Helfferich.

Denmark is a major contributor to the destructive exploitation of the world's oceans. Danish fishing fleets are amongst the most rapacious in the world and their plundering of the seas has not been dampened by the realization that there are serious ecological concerns about the ability of the oceans to survive this ceaseless plundering.

Flaunting their moral superiority with their defense of silly cartoons does not remove the stench of ecological moral decay that is emanating from Copenhagen.

The rot in Denmark from the corpses of fish, factory farms and starving puffins, whales screaming in agony, and now their opposition to the defense of the great whales from illegal whaling is a foul odor indeed and one that bodes ill for our oceans and our future. 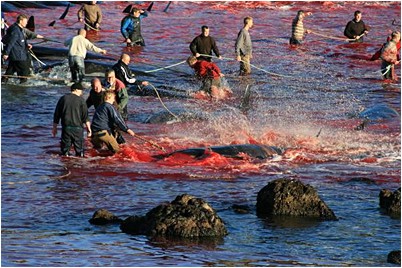 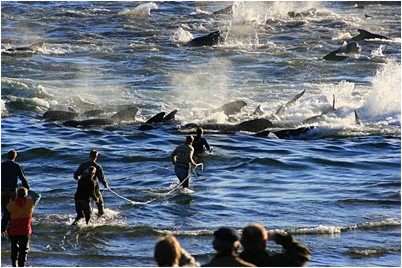 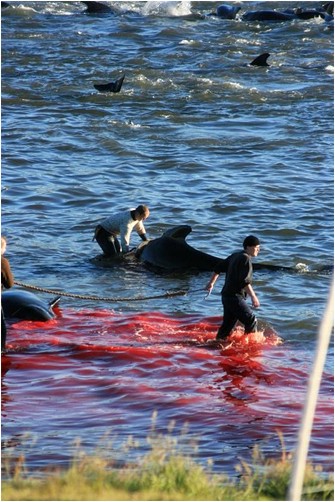