The Whalers Have Been Shut Down!

The continent of Antarctica is like a big round table with the Nisshin Maru and the Bob Barker circling clockwise from west to east. If this is their intention, I will send the Steve Irwin and the Gojira westward counter clockwise to meet them as they come around from the west. I am assuming the harpoon vessels will also head westward to meet up with their mother ship. With five ships heading westward and two ships heading eastward, both fleets will most likely meet somewhere below South Africa.

Unless of course, the entire Japanese whaling fleet decides to head home within the next few days.

The Sea Shepherd ships will not leave the Southern Ocean until the whalers leave and return to Japan.

The Nisshin Maru is presently in the territorial waters of Chile and the Chilean government, the media and the people are watching it closely. It is illegal for whale meat to be transported through Chilean territorial waters. Sea Shepherd has been in touch with the Chilean Navy to keep them updated on the position of the Japanese factory ship.

This has been a very successful campaign beginning with our locating the Japanese fleet on December 31 before they had killed a single whale, to tying up two of their three harpoon vessels for over a month, and keeping the factory ship and the third harpoon vessel on the run. We have had numerous confrontations with the Nisshin Maru and her trio of hunter killer boats. The Yushin Maru #3 appears to have suffered some mechanical damage.

The 88 crew from 23 different nations on the three Sea Shepherd ships have succeeded in bringing the Japanese whaling fleet to its knees. We need to keep them there.

Every day that we prevent them from killing a whale is a victory.

All the efforts of our crews, our shore volunteers and our supporters are paying off. We have demonstrated that a small group of dedicated volunteers can make a significant difference. I am confident that we will restore the integrity of sanctuary to the Southern Ocean Whale Sanctuary and that we will drive these poachers and butchers from the Southern Ocean permanently.

Operation No Compromise, our seventh voyage to defend the whales of the Southern Ocean, has been enormously successful. Many hundreds of whales will be left alive and free to live when we leave these waters in March. 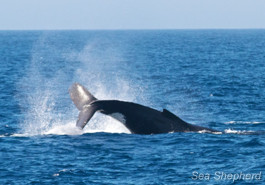 A glimpse of a whale in the Southern Ocean swimming away. Photo: Gary Stokes

Please support this campaign so we can see it through to the
permanent end of whaling!