The Way of Water

The Way of Water

Combating disastrous deceptions with the power of patience 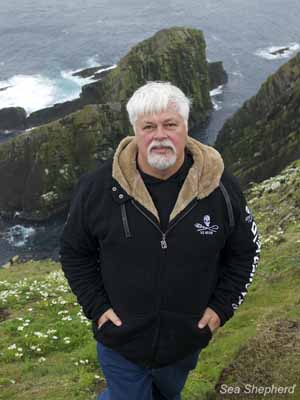 Captain Paul Watson
Photo: Billy Danger/Sea ShepherdOn October 26th The Japan Times reported on the March 11, 2011 Japanese tsunami donations scandal with the headline “Misuse of Disaster ‘Reconstruction’ Money Runs Rampant.” In the article it plainly admits that the Fisheries Ministry was given 2.3 billion [Yen] for countermeasures against the Sea Shepherd anti-whaling group.

Professor Yoshimitsu Shiozaki of Kobe University, an expert on reconstruction of disaster areas, stated in the Japan Times, “this time the funds are being used in a more deceptive way.” Japanese Member of Parliament Kuniko Tanioka was quoted as saying, “It has turned out that the funds have been used for projects they had not imagined…It has dampened the disaster victims’ will to rebuild their lives.”

The Fisheries agency has been very defensive about their anti-Sea Shepherd allocation, insisting that the budget to counter Sea Shepherd will “eventually benefit areas in and around the city of Ishinomaki, Miyagi Prefecture, where about 1,200 people work in whaling related industries.”

We thought this was about science, not jobs. We thought the purpose was research, not profits.

It appears it is whatever is convenient, as required by the Japanese whaling propaganda machine. Right now there are coastal towns with real people suffering because of lack of funds to repair their homes and to recover their lives. Yet the Nisshin Maru is currently in Hiroshima undergoing $24 million dollars worth of repairs and upgrades. 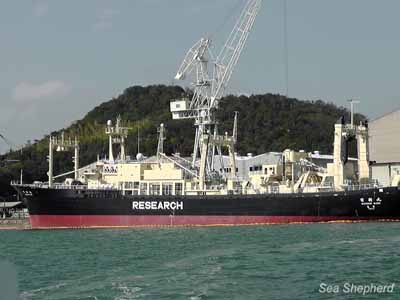 The Japanese government is not only illegally killing whales in an internationally recognized whale sanctuary, they are also denying assistance to their own people in order to continue this crime of killing whales.

Nations such as the United States, New Zealand, Germany, and many others are complicit in this crime by refusing to uphold international conservation law and by their willingness to assist Japan in their harassment of anyone who attempts to stop illegal Japanese whaling activities.

These nations know that Japan is acting unlawfully but they kow-tow to Japan because of trade relations.

It is truly amazing that Sea Shepherd has not only been able to continue our interventions against the whalers, but we are actually defeating them in the field and in the courts. Sure it has its price. Being forced underground because of Japan’s power to manipulate Interpol into issuing a politically-motivated Red List issuance is inconvenient, but it has not slowed the momentum of the Sea Shepherd crews in preparing our ships for Operation Zero Tolerance.

The Japanese whalers survive as glorified welfare bums, sucking funds from the victims of the tsunami and earthquake and milking the Japanese taxpayers. Their bloody industry is dead and the Japanese people are becoming increasingly aware of how deceitful and corrupt this industry is.

Being exiled from my own country and forced to remain at sea is a small price to pay in this long struggle to end whaling in the Southern Ocean Whale Sanctuary. I love being at sea and I have friends supporting me all around the world. We are united by the common desire to save the lives of whales and dolphins and to protect the overall diversity of life in our oceans.

I was pleased this week to see the release of Nils Greskewitz from the jail in Shingu, near Taiji. Sea Shepherd Advisory Board attorney Oliver Wallasch donated his legal expertise to negotiate the release of Nils. He returned home to Germany after paying a fine and damages to a statue that he accidentally damaged.

Nils knew that climbing on the statue was a violation of the Cove Guardian rules. He recognized this and took responsibility for his actions. Personally I viewed the sight of the bent harpoon on the statue of the whaler as a positive omen.

The Japanese police used the incident as an excuse to raid the Cove Guardians and to confiscate their laptops, phones, and cameras. They returned the items damaged, yet due to the generosity of our supporters worldwide we had been able to replace the equipment within twenty four hours and Operation Infinite Patience is now streaming live via EZearth.tv.

We have been fighting the dolphin slaughter in Taiji ever since we first exposed this horrific atrocity to the world in 2003, when we documented the slaughter and freed fifteen captured dolphins back into the sea. We will never abandon the dolphins at Taiji and we will never abandon the whales in the Southern Ocean Whale Sanctuary, no matter how dangerous, daunting, and inconvenient it is, or will be.

I am so proud of what Sea Shepherd is doing and accomplishing around the world. The Cove Guardians have been on the ground in Taiji for nearly two months and will remain on the ground until March. The Sea Shepherd ships are fully prepared to confront the Japanese whalers. Our efforts in the Galapagos over the past twelve years have made an enormous impact. Sea Shepherd France is championing the sharks near Reunion Island and Sea Shepherd is expanding our efforts to protect sharks across the South Pacific.

We are demonstrating that a small group of passionate individuals can challenge enormous economic powers and still triumph over formidable opposition.

We are exercising the power of water. We are like individual drops coming together to form a deluge to overwhelm the enemies of those we defend and protect. Water can overwhelm without causing harm. Water can flow to where it is needed and when the task is completed, water can simply be still and at peace.