The Spirit of Steve Irwin

The Spirit of Steve Irwin

Japan has declared war on Australia's humpback whales! To defend the whales, the Sea Shepherd Conservation Society has joined forces with the most powerful name in Australian wildlife conservation -Steve Irwin.

Two years ago, Steve wanted to join up with Sea Shepherd to voyage to Antarctica to defend the whales from Japanese pirate whalers. I was pursuing a meeting with him but tragically, only a few weeks later Steve died unexpectedly.

It was a great loss to the wildlife of this planet. Steve had directed his incredible imagination, his passion and his resolve towards finding ways to both educate people to respect wildlife and to physically take action to protect wild animals.

I always had a great deal of admiration for the Crocodile Hunter knowing that the meaning of the word "hunter" in Steve's usage was one that benefited the crocs instead of harming them. Steve put wildlife first and foremost and he lived wildlife everyday of his life. So this year, we decided to honour Steve Irwin by naming a ship after him, a ship that would bear his name on a campaign to save the whales that Australians love and want protected. 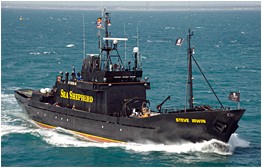 On December 5th, Terri Irwin launched the Steve Irwin with a bottle of champagne and sent the ship to sea on a mission to protect and defend the whales. And so with Steve's spirit onboard we now are heading south into the cold and remote waters of the Southern Oceans Whale Sanctuary.

The Steve Irwin proudly flies the flag of the Five Nations of the Iroquois Confederacy presented by the Mohawks at Kahnewake.

Our objective this year is to search out and locate the Japanese whaling fleet and to enforce international conservation laws to shut down their unlawful whaling activities. Onboard the Steve Irwin there are 41 crewmembers including 14 Australians. Back in Fremantle, Melbourne, Brisbane, the Gold Coast, Byron Bay, Torquay and throughout Australia we have dedicated supporters and we are gaining more support for Operation Migaloo, our campaign to save the whales.

The newly elected government of Australia has promised to send down a naval vessel to intercept and monitor the Japanese whaling fleet. We hope that they will go further and order the Japanese fleet out of the Australian Antarctic Territory.

Australians have the power to end whaling in the Southern Oceans. All that needs to be done is to demand of the newly elected government that they honour the spirit of Steve Irwin and end this cruel and unlawful practice that Steve and all of us have been saddened and sickened by.

If the government of Australia really wishes to honour the memory of one of their most famous and beloved sons, how better to do so then saving the whales in Steve Irwin's name?

Can the government of Australia stop Japan? The answer is yes. They just need to exercise the will to do so.

A great many of the whales are slaughtered in the Australian Antarctic Territory, the same place that Australia intercepts, arrests and seizes Uruguayan toothfish poachers. If Australia can stop Uruguay from killing fish than they have the legal authority to stop the Japanese from killing whales. By not enforcing the law against Japan they are sending the message that Australia only intercepts and punishes poor Indonesian and South American fishermen but ignores the rich and powerful Japanese pirates.

Another argument is that Japan is a major economic trading partner and Australia will be punished economically if they act against illegal Japanese interests. The fact of the matter is that Japan needs Australian resources more than Australians need Japan. Japan will not stop buying Tasmanian woodchips (unfortunately) because of the whaling issue. And the bottom line is that Australia must be a democratic nation built on the rule of law and not a whore nation whose integrity can be cheaply bought by any economic bully that chooses to lay down the cash.

Japan holds Australia in such contempt that this year they have targeted endangered humpback whales as a slap in the face to Australians. What they are saying is that we will do whatever we want to down in your waters and your government does not have the guts to stop us.

The former Howard government argued pathetically that the law could not be enforced in the Australian Antarctic Territory because Japan did not accept Australian sovereignty over the waters. Of course Uruguay does not accept it either but there appears to be a different standard for them - they are a poorer nation.

Less than a generation ago, Japan did not accept sovereignty over Australia itself. The leaders of Australia then did not look the other way. They fought Japan and won. In this war to save the whales from Japanese harpoons, Australians can win again - if they truly wish to save the whales. 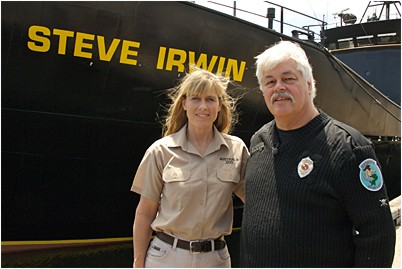