The Seals Are Winning the Seal Wars

The Seals Are Winning the Seal Wars

Since I was a boy of 10 growing up in the Eastern Canadian fishing village of St. Andrew-By-Sea, I have had a dream. The dream was to end the vicious barbaric slaughter of harp and hood seal pups, killed every year on the ice floes off Canada's Eastern coast.

That dream is finally within grasp of realization. I am now quite confident that we will shut down the seal slaughter this year and unless the Canadian government decides to escalate even more tax dollars towards a program of total subsided slaughter - there is no future for sealing in Canada.

And at long last, Canada, my Canada, will be ready to join the 21st Century where despicable and brutal occupations like sealing have no place.

The Canadian delegation to the European Union have just returned from what they described as a frustrating series of meetings in their attempt to convince Europeans that the slaughter of seals in Canada is "humane".

The European Union is about to vote on a bill to totally ban all seal products from markets in Europe.  On the last day of a five-country sweep through Europe, Newfoundland's Minister of Natural Resources Kathy Dunderdale conceded that seal conservation and animal rights groups have been successful in educating public opinion with their message that the sealing industry is inhumane, cruel and a threat to the species and the marine eco-system of the Northwest Atlantic Ocean.

"There's a groundswell of opposition right throughout Europe to the seal hunt," Kathy Dunderdale said from Vienna, Austria before heading home.

Dunderdale and  many other Canadian officials, traveling on the Canadian tax-payers expense account met with many of the 27 European Union members to beg their case on behalf of the seal killers. Dunderdale made the silly accusation that an EU acceptance of a ban on seal products sets a dangerous precedent for countries that slaughter animals for commercial purposes or consumption.

"It's seals today, but it could be deer tomorrow and it will work its way down."

Apparently Dunderdale and the Canadian delegation are frightened that there might be a domino effect of kindness and humanity unleashed on the world if Europe votes to oppose cruelty on the ice to seal pups.

Canada's desperate last-ditch appeal comes as European legislators prepare to vote on  legislation that could see a ban on the importation of all seal products, not just from Canada but also from Namibia, Norway and Russia. 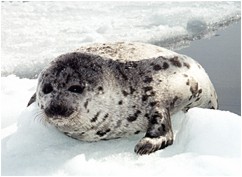 The European Commission, the executive branch of the European Union, is awaiting a second report on seal hunts before making its recommendation to the European Parliament, likely this summer.

An earlier report found that while it is theoretically possible to kill seals rapidly and without causing avoidable pain, there is strong evidence that effective killing does not always happen in practice.

Evidence gathered this year by the Sea Shepherd Conservation Society, the Humane Society of the United States and the IFAW has demonstrated that despite the government's new policy of "double bash and slash" the killing is as brutal as ever.

The new Canadian fisheries policy orders sealers to hit the seal pup twice with the club and then sever the arteries under the flippers to ensure the seal is dead. This method of sealing which is hardly an improvement from past methods has not been observed even once by Sea Shepherd crew on the Farley Mowat presently in the Gulf of St. Lawrence.

Canada's East Coast seal hunt is the largest marine mammal hunt in the world, with an average annual kill of about 300,000 harp seals. The Sea Shepherd Conservation Society is confident that the European Union will vote to pass a universal ban on all seal products.

With seal pelt prices falling dramatically from $105 per pelt in 2006 to $33 per pelt this year, with fuel prices rising, with government subsidies and rescue effort costs rising, with growing international indignation, with tourist and seafood boycotts, Canada must decide to surrender its dogmatic and stubborn support of seal killing.

Some die-hard sealers argue that they will find other markets in nations that flaunt the rules of wildlife trade like Japan and China.

Dion Dakins of NuTan Furs Inc. admitted that a ban would likely go into effect, but insisted it wouldn't be the death knell for his trade in seal pelts.

"I'm fairly confident a ban will be put in place," he said from his office in Newfoundland. "Do I think it will kill the trade? No, I think we'll be able to find routes and marketing distribution to our major markets in Russia and China without the EU, but you never want to see your product blacklisted."

The fact is however that it is Europe that dictates fashion and both China and Japan slavishly follow European fashion trends. If seal fur disappears from the racks of the fashion designers in Paris, London, Milan and Berlin, it will disappear worldwide.  In addition sales of fur to Norway, Russia, Japan and China would be damaged because presently Europe is the critical shipping and manufacturing market prior to reaching the retailers. Belgium and the Netherlands have already approved legislation prohibiting the sale of seal products. Germany, Italy and Austria are drafting similar legislation, and this has put immense pressure on the European Commission to go forward with the ban.

Mark Glover of the International Humane Society in London said he doubted Canada's appeal to British parliamentarians would alter what he sees as growing momentum toward a ban.

"Right now if you asked the public or the members of parliament, it's rock-solid for a ban," he said. "They certainly didn't make any headway in the U.K."

And they are not making any headway in the Gulf of St. Lawrence. This morning Canada has placed two ice-breakers close to the Sea Shepherd ship Farley Mowat and has twice overflown our ship with not just Fisheries and Coast Guard planes but also with Canadian military aircraft in an attempt to intimidate the Sea Shepherd crew.

The Canadian government has ordered the Captain of the Farley Mowat to go to Sydney, Nova Scotia and to surrender the vessel to the Canadian government. However Canada has no authority over a European registered vessel in international waters and the Dutch Captain of the Farley Mowat has not received any directives from the Dutch government indicating that the vessel has done anything unlawful.

The Sea Shepherd crew will remain with the sealing vessels and will continue to document the inhumane slaughter of seal pups in a legal and non-violent campaign. 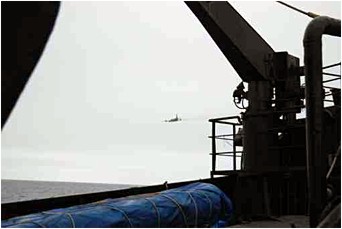 Military plane over the Farley Mowat 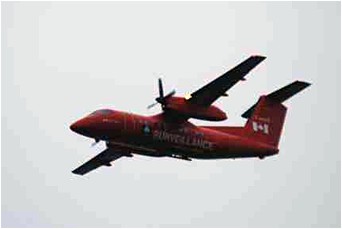