No effort has been made to clean up the whaling station. The big iron tanks that once converted whale blubber to oil still reek of flesh and ribs and jaws of once living whales frame the buildings with the sea. If the walls of the buildings at vid Air could speak, they would warn us that not too long ago, the sentiment that the oceans are inexhaustible almost drove all of the great whale species to extinction. They would tell us to learn from history or be doomed to repeat it.

What is strange about the Faeroese attitude towards whales is that very few advocate a return to commercial whaling. Many are supportive of Sea Shepherd's successful interventions against the illegal slaughter of whales in Antarctic waters by Japan. And yet, there is a startling disconnect between the decimation of species of great whales and the continued slaughter of pilot whales.

The most common argument heard is that the pilot whales are many in number. We have been told by locals that estimates here place the pilot whale population in the North Atlantic as high as 700,000. However, there is very good reason for the long-finned pilot whale to be listed as a threatened species under the Convention on the International Trade in Endangered Species of Wild Flora and Fauna (CITES). The pilot whale is protected internationally from hunting because there are no exact figures and nobody really knows on how many pilot whales there really are. 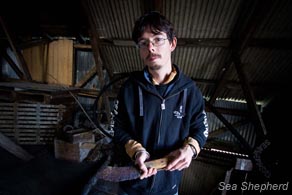 Peter Hammarstedt displays an old flensing knife.
Photo: Simon AgerWhat we do know is that adopting anything short of the precautionary principle is ecological suicide. We have to assume the lowest common denominator and as long as the international scientific community has deemed that the pilot whale is threatened, then the complete destruction of entire pods of pilot whales, complex social groups that have evolved over eons, both socially and genetically, is an environmental travesty.

The sentiment that the hunting of any cetacean is somehow sustainable is the same one that was muttered at vid Air before nothing short of a total moratorium was required to save the great whales. The deliberate inflation of statistics governing numbers of marine mammals has been used to justify every wildlife slaughter from the clubbing of harp seals in Eastern Canada to the harpooning of whales in Antarctic waters.

The whaling station at vid Air is symbolic of a not so distant time when a combination of ignorance and blatant disregard almost robbed us of one of nature's greatest treasures. The Sundini Fjord no longer claims the lives of fin whales, but just two years ago several hundred pilot whales died here. Pilot whale skulls are still found washed up on the beach where the Brigitte Bardot is moored. Had the whalers from Hvalvik looked up from their bloodbath that day they may have noticed that not far beyond their field of vision, the whaling station at vid Air continues to decay and mark the passage of time, speaking volumes about the fact that whaling belongs in the past.