I feel horrible, not by seeing the cheerful faces, but at what I have to do next. I’m going to ruin their visit. But I have to; they need to know –only they can lead to the end. ‘Do you know what happens here?” I ask a friendly couple from Italy, politely. The curious faces try to guess what comes next.  A deep breath and the horror story starts. Each morning, from the start of July, when the breeding grounds are still shrouded in mist, one four-wheel-drive vehicle parks at the reserve. It’s passengers check the perimeter for intruders. Once the coast is clear the convoy of death is allowed to approach. Multiple patrol cars, a van with workers, and a yellow loading truck arrive from Hentiesbaai, a small village just 60 kilometres from this remote coastline.

With the sun slowly rising over the horizon, the men get to work. Frightened adult seals flee for the safety of the sea. The still nursing, baby seals remain behind, panicking on the beach. The workers become merciless sealers whose clubs crush the skulls of hundreds of baby seals. The rocky shores and sandy beach are covered in blood within minutes.  The dying pups are carefully but brutally pierced in their hearts to avoid damaging their valuable pelts. After the last scream fades away, the truck pulls up and the dead bodies are loaded in. Once they’re finished, the sealers cover the traces of blood with sand, shrieking sea gulls fight over what is left behind.

Just after eight o’clock the convoy pulls out, the patrol cars leave first to make sure nobody interferes with their evil business. Finally the truck leaves, guided by an armed patrol car. Only car tracks remain behind, as silent witnesses to the cruel massacre that has just taken place.

The sealers drive to a factory in Hentiesbaai where the baby seals are skinned. The pelts eventually will end up in a factory in Turkey, where a Turkish/Australian native name Hatem Yavuz has the fur transformed into haute couture for his global clientele without a conscience.

Barely one and a half hours after the biggest marine wildlife slaughter in the world, the gates of Cape Cross open to welcome tourists at this unique seal reserve.

The couple looks flabbergasted, their jaws wide open and the cheery eyes now filled with sadness. I apologize but explain why they need to know; only the pressure from the tourist industry can stop this slaughter. They understand and will promise to make a complaint with their travel agent. A small win, but good enough for now.  We head back to the hills of the Namib Desert where O.R.C.A. Force continues its mission to make sure this horror story reaches the rest of the world. Once we win the hearts and minds of the tourists, the dropping visitor numbers will force the corrupt government officials to their knees.

However, it remains to be seen how Namibia interprets numbers regarding the seal slaughter.  It seems the government has a difficult time figuring out the very economic basics. Namibia’s income from the seal industry is approximately $120,000(USD). That’s not the actual final profit, no- on the contrary, this is made by Hatem Yavuz who laughs all the way to the bank with a derived income of $3.25 million (USD) from the sale of pelts. But he is nowhere near Namibia. On the other hand, the Namibian tourist industry earns millions of dollars from visitors entering the Cape Cross area each year. So what should the African country do? Continue to decimate the vulnerable seal colony population or nurture its wildlife and invest in eco-tourism, creating more jobs –yes, even for the seal butchers- and create a revenue stream that profits from the gift of living seals instead of dead ones? I know, anyone with common sense would see these questions rhetorically. But not Namibia, last year Sea Shepherd offered 30,000USD (more than all the sealers make together) directly to be invested to promote eco-tourism if they would stop the slaughter. The offer was refused. 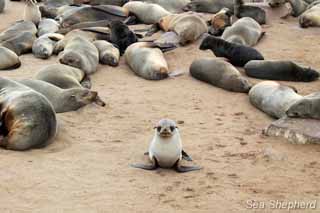 Young Cape Fur SealBecause the situation in Cape Cross is an insane controversy, this is where we focus in Namibia. There is seal slaughter in Wolf and Atlas bay near Luderitz as well, but Cape Cross has to be our starting point to end the barbaric Namibian seal slaughter. The area is an assigned seal reserve, just like the Antarctic waters are a whale sanctuary. The Namibian people declared Cape Cross a protected place for seals. When a country decides a place is sacred, it becomes the government’s duty to make sure the reserve is protected. If they fail, it’s up to individuals to make sure this happens.  It’s not just a local matter or even just a national matter; it’s a matter of protecting endangered species in the world. We live in a global village and once we learn about an atrocity targeting endangered, protected wildlife –no matter where we come from- we should act when we can.

After Operation Desert Seal I, Sea Shepherd representatives met with the Namibian Ombudsman and several other interest groups. The so-called Voice of the Namibian people promised to instigate a thorough investigation looking at all sides of the story. He never did.  He never had independent scientists research the impact of slaughter on the seal colony of Cape Cross, let alone address the immensely ‘inhumane’ practice of killing the seals. He relied on reports fabricated by the Ministry of Fisheries who has no other interest than killing the seals, blaming the creatures –who depend on the sea for their survival- for eating all the fish.  It’s not difficult to see that such a statement simply is not true – nowadays a simple search on Google with the keywords ‘overfishing Africa’ will show that fishermen deplete the African waters, not the animals who’ve lived in harmony with the ocean for thousands of years.

The ombudsman concluded the seal slaughter could continue. We disagreed and knew immediately that despite the risks, Sea Shepherd had to go back into the Southern African country to help the seals.

Our strategy is simple: to expose the dirty, secret business of the seal slaughter, which is so carefully covered up. We knew what to expect: navy vessels, corrupt police, armed guards, and a harsh climate to operate within. Nevertheless we decided to turn the tables to our advantage. If the enemy is large, we have to be small, if the terrain is horrendous we need to find the places where the enemy doesn’t want to be. If daylight exposes you, you work during the long, dark winter nights. If they expect you coming over land or sea, you use the one area where they can’t find you, in our case- the air.

The only way into the well-guarded seal reserve would be by using unmanned aerial vehicles (UAV). During the slaughter the air space is restricted, so finding someone to fly a helicopter or a plane and avoid getting caught was impossible. Next we had to bring in UAV’s that were light, easy to transport, and didn’t look too much like military equipment. It would mean that we had to compromise on reach, endurance, and camera ability. And besides that, they had to be cost effective. We couldn’t anticipate beforehand what would happen when we crossed the border. We couldn’t take the risk of having very advanced and expensive equipment confiscated before we had a chance to succeed. During our preparations we realized our plan became more and more a mission impossible. But we stood by the phrase that Captain Watson often uses “Lost causes are the only causes worth fighting for.”

So here we are, at an undisclosed location in the vast Namib Desert just finished with our first successful test flight over Cape Cross. All we need now is fortune with the so far horrible cold winter elements and with our flying equipment that gets hammered by the wind and sand.

We don’t need much, we just want to show the Namibian government and our global supporters what we can do with very few tools so we can come back year after year to continue to expose Namibia’s dirty secret, live streaming it on the internet if we have to.

Flying over the area will frighten and anger the sealers and embarrass the corrupt officials who take bribes in order to continue the seal slaughter. O.R.C.A. Force will show them that they can spend all the money in the world on covering up the slaughter, but we will continue to expose the truth behind their second largest tourist attraction. It might be a long and harsh struggle to convince the tourist industry, the Namibian people, and the politicians to restore the peace at this Cape Cross Seal Reserve and let nature run its course, but our team is never going to leave the seals behind. We are well aware: in Africa it’s always a long flight to freedom.