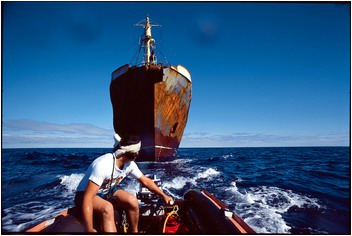 Thirty-two years ago in June of 1975, I sat in a small inflatable boat and watched, angry and helpless, as a large sperm whale rolled in terrible pain upon the surface of the sea. Blood spurted out in torrents from a gaping raw wound to the left side of his massive head. As he rolled over, his lower jaw opened and the air was rent with a scream of horrific agony.

The whale had taken an unattached harpoon at point blank range to the head as he turned to defend a mortally wounded female of his pod. As he thrashed about and his hot blood stained the waters, the Soviet killer boat began to move in to seize the dying female. They turned their back on the suffering of the whale; its pain was of no consequence to them. They most likely did not give it a second's thought.

As I watched transfixed, the whale rolled over again and this time his eye looked in my direction. Suddenly with a burst of energy, his tail slapped the water and he dove. I saw a trail of bloody bubbles moving fast towards me until the massive head, dripping blood and gore rose up from the sea at an angle beside my boat so close I could have reached out and wrapped my fingers around one of his six inch teeth in the lower jaw.

As his body emerged from the sea, I found myself looking into the depths of his eye. He was so close I could see my own reflection in that eye, an orb the size of my fist. That one gaze changed my life forever, and forever robbed my heart of both joy and respect for my own species.

What had begun as an angry attack suddenly changed as I sat, motionless and awed by that alien eye, and I saw in a moment that the whale suddenly understood what we were doing there. We were not the killers, the men who feed upon life's sacred fire. He knew. He knew I was there to protect, to defend, and not to kill.

I felt it and I saw as the muscles of that massive body rippled and instead of falling forth upon my small boat and I, the whale began to fall back, his body sliding slowly into the blood stained inky blackness of the sea.

I saw his eye slip beneath the waters and he died.

I have no words to express the overwhelming sadness that overcame me at that moment. It was if my life had been looted of everything I held to be precious. 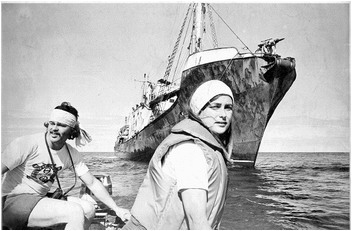 As I sat there in my small boat and watched the body of the that great leviathan rise to the surface, stripped of life, and beyond his still warm corpse I saw the whalers lashing the tail of the female to the side of their ship to drag her demeaningly through the sea with her head beneath the surface. She was not yet dead and struggled to breathe and was slowly drowned as blood flowed from the gash in her side. I felt an icy rage stab at my heart and only one word screamed in my head: Why?

These Soviet whalers were killing the sperm whales for the primary product or high heat resistant industrial oils. One of the uses for the oil was to lubricate weapons including th intercontinental ballistic missile. It occurred to me that they were destroying this intelligent, socially complex, feeling, thinking sentient being for the purpose of manufacturing a weapon designed for the mass extermination of human beings.

Like a thunderbolt, the realization dawned on me that my species was insane.

It was on that day that I turned my back on the ambitions of humanity and swore to do what I could to protect the whales and the other beings in the oceans. I became in effect, an enemy of my own species.

Now thirty-two years later, I continue to defend and protect the whales, the dolphins, the seals, sea turtles, fish, and other citizen species in the seas.

It has been a heart-breaking mission - a never-ending war that has seen me lead countless expeditions to defend life with both victories and defeats. We have been shot at, been rammed, beaten, jailed, threatened, and condemned. On the other hand, we have sent whaling ships to the bottom, rammed them, and destroyed their harpoons; we have released dolphins, sharks, turtles, and fish from nets; destroyed longlines, harpoons, sealing clubs and rifles.

I have no apologies for any of these actions. After sinking half the Icelandic whaling fleet in 1986, a Greenpeace leader accused me of setting back the whale conservation movement ten years and said the action was reprehensible and unforgivable.

I answered that I was not concerned for his or anyone else's opinion. The whaling ships were sunk for the whales, not for people, and if he could find just one whale that disagreed with the action, I would promise not to do it again.

So, here I am in January 2007, down off the coast of Antarctica searching for the Japanese whaling fleet on an impossible mission.

As large organizations like Greenpeace raise tens of millions of dollars, we have spent every penny we have and gone into debt to send two ships down to the Southern Oceans to hunt down the whalers. As politicians posture and pose, crying crocodile tears for the whales, they deny us coordinates, they refuse to uphold their own laws, and they threaten us for doing the job they should be doing.

The Japanese whalers have satellite surveillance provided by their government. They have speed, sonar, refueling ships, explosive harpoons, political and economic clout, and they have governments the world over they have bought and paid for to do nothing to interfere with their illegal activities.

We have a couple of old ships and all the passion that a hundred volunteers can bring to a cause. Our objective is an impossible one: How do we disable a formidable whaling fleet that outmans us, out maneuvers us, is technologically far superior to us, and is guided by the ruthlessness that only those who slay whales can possess?

We can only throw ourselves upon the fire in the most courageous manner we know how, and hope that we can make a difference, that we can stop the slaughter, end the cruelty, and uphold the law.

In a society where might makes right, where the dollar speaks the loudest, and where humans barely comprehend the intricate relationship we have with the natural world and the responsibilities that lie with such comprehension, it is indeed an impossible task.

But sometimes the impossible is the only possible solution. And so we fight on, hoping for miracles and knowing in our hearts that there is no other option.

Thirty-two years ago, I watched a great whale die as I looked into his eyes and it changed my life forever.

That is why I am down off the coast of Antarctica today hunting for the killers
of those I consider my friends - the whales.