The Gift that Just Keeps on Giving: the Continuing Adventures of the Farley Mowat

This week the Farley Mowat was arrested in Lunenburg, Nova Scotia. Appropriately on April 1st, the sheriff posted an arrest warrant on the wheelhouse door where it is presently docked at the government wharf.

The Waterfront Development Corporation, a provincial crown corporation, took legal action against "the owners and all others interested in the ship" last month.

According to documents filed with the court, the corporation is seeking $29,410.96 for unpaid berthage between March 6 and December 15, 2010.  In default of payment, the corporation is seeking an order "for appraisement and sale" of the ship. The ship is not Sea Shepherd’s property so it’s therefore not our problem. The current owners bought it from a government auction for $5,000 with the intention of fixing it up and making it seaworthy again. But they ran out of money and appeared to have abandoned the vessel.

So once again, the government is stuck with the chore of unloading a retired Sea Shepherd ship. This is three years after the government of Canada seized the ship in the Gulf of St. Lawrence for interfering with the prestigious and glorious Canadian tradition of baby seal bashing.

Then Canadian Fisheries Minister Loyola Hearn was an easy politician to manipulate. He was a staunch, short-tempered Newfoundland supporter of seal clubbing and had vowed to defend the poor little sealers from the bullies like us who want to defend the baby seals from their clubs.

So, I sent the Farley Mowat into the ice floes under the command of Dutch Captain Alex Cornelissen and Swedish First Officer Peter Hammarstedt. I was not onboard because I was a Canadian and that would have given the Canadian government the excuse to legally crucify me. What I wanted was a European registered ship with a European crew to bring attention to the seal hunt to help with the European Union’s decision to ban seal products.

Predictably, Hearn overreacted and attacked the Farley Mowat with a heavily armed SWAT team from the Royal Canadian Mounted Police. We could not have asked for a better scenario for publicity. The images of them brandishing automatic weapons in full combat regalia were priceless.

The Farley Mowat was seized and Captain Cornelissen and First Mate Hammarstedt were both charged with the horrific crime of witnessing the slaughter of a seal pup. The Farley Mowat bailed them out with $10,000 worth of Canadian $2 coins that we call Doubloons because the Canadian $1 coin is called a Loon, or a Loony, which means that Canadian banks are Loony bins.

Cornelissen and Hammarstedt were not allowed to return to Canada to stand trial because immigration Canada would not let them into the country, so the trial proceeded without them and they were fined some $45,000. But since they could not return to the country, they simply did not need to pay the fines.

The government then arrogantly informed me that I would have to pay a $75,000 fine for the return of the ship. I replied that I was not interested in paying the fine.

The government then ordered the ship to be sold to recover costs without even taking it to court. I issued a media release stating that I would consider the ship as belonging to Sea Shepherd and if purchased, we would steal it back. Not that we wanted it, but we wanted to discourage any purchase. 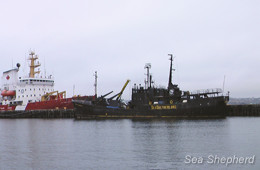 The Farley Mowat awaiting her fate at a
Canadian port

Finally the ship was sold for $5,000 to an environmental organization in Oregon and because of that, we decided to cooperate with the new owners. Unfortunately, the new owner went broke and abandoned the ship in Lunenburg where it now sits, once again under arrest, continuing to make waves politically and continuing to embarrass the Canadian Department of Fisheries and Oceans.

Our objective of publicizing the seal issue in Europe was very successful and indeed contributed to the decision by the European Union to ban seal products thus pulling the carpet from under the feet of the sealing industry, and effectively shutting the commercial operation down. Since then, the Canadian government has been spending millions in a fruitless effort to overturn the European Union’s decision.

The bureaucrats and politicians of Canada are not known for their intelligence. The President of the Treasury Board, Stockwell Day, thinks that dinosaurs went extinct because they could not get on Noah’s ark. The Governor General likes to eat raw seal hearts on television, the former Prime Minister Jean Chretien thought that pepper spray was what you put on a steak, and former Prime Minister, William Lyon MacKenzie King, made decisions by talking to the ghost of his dead mother. And my own experience with the government of Canada is how they can so easily fall for the same trick twice.

In 1992, Canada ordered my ship the Sea Shepherd II into Ucluelet harbor in Vancouver Island. I was returning from the North Pacific to Seattle with the intention of retiring the old vessel, and I was concerned that it was going to cost a few hundred thousand dollars to do so. I did not need to go into Ucluelet and the government had no legal authority over me to force me in but I saw an opportunity and the ship entered the harbor with a pilot where we were immediately pounced upon by the Mounties and Canada Customs. They brought dogs and all sorts of equipment to do a complete search of the ship for weapons and drugs. They of course found nothing and said we were free to go. But the pilot then presented me with a bill for $7500 for pilotage fees. I told the pilot that I had no intention of paying said fees because I entered the harbor at the request of the government of Canada. The pilot said that if I did not pay the fee, the ship could not leave. I replied that I had no intention of paying the fee.

I sent our ship the Sirenian into the harbor and we offloaded everything of value and made three trips to pump out the fuel and oil. We then left the Sea Shepherd II at anchor. The government took us to court for the fee but we did not show up for the trial and the judge ordered that we pay half the fee because the fee was for in and out of the harbor and we had not left. I ignored the court order.

I then went back to Ucluelet and sold the ship to a guy in the bar for $5,000. Unfortunately he died six months later in a kayaking accident and the ship was left in the harbor where it broke anchor once and almost took out a local marina. Finally after 10 years, the ship was towed out of the harbor at the government’s expense and taken to Victoria to be cleaned up and broken down. The entire saga cost the government over one million dollars and all because they tried to stiff us for $7500.

Then 18 years later, they fall for the same tactic once again.

If I have to retire another ship, I wonder if I will be able to use the services of the Canadian government once again. I’m betting that I can. The current Fisheries Minister Gail Shea is dumber than all of the previous Fisheries Ministers put together. She recently raised the seal kill quota to almost half a million seals despite the fact that there is no market for their pelts. Even the sealers are shaking their heads at that one because they know that there is no point killing seals if you cannot sell the pelts. But Shea is in Ottawa and in Canada, that is about as far removed from reality as one can get.