The End of the Japanese Cetacean Death Star

The End of the Japanese Cetacean Death Star

Every year, a massive killing machine orbits around the continent of Antarctica.
It's a large, floating industrialized factory that acts as the mother ship to five fast, lethal hunter killer machines.

The Nisshin Maru is this factory ship and I am giving it a more appropriate name - the Cetacean Death Star. Since the global moratorium on commercial whaling was established in 1986 by the International Whaling Commission (IWC), the Cetacean Death Star has murdered some 18,000 defenseless and endangered whales in an area designated as the Antarctic Whale Sanctuary. 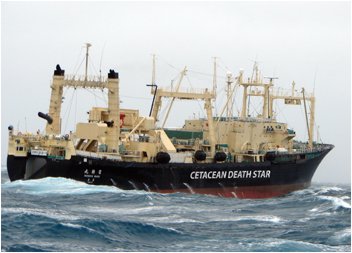 The area should be called the Antarctic Whale Slaughter Grounds but the word "Sanctuary" sounds nicer. It's a very Orwellian situation where most of the whales that are slaughtered each year are slain in a place called a sanctuary.

What is even more bizarre is that when conservationists attempt to disrupt the illegal killing of endangered whales in this established Sanctuary we are labeled extremists and eco-terrorists.

What we really have here are killers terrorizing wildlife and threatening the environment accusing non-violent people who are opposed to the slaughter of being "eco-terrorists." Even George Orwell would be shaking his head at this one.

You cannot set up an industrialized factory on the shores of the continent of Antarctica. It would be a violation of the Antarctic Treaty.

The Antarctic Treaty also forbids the hunting and exploitation of Antarctic wildlife.

Yet, the Japanese have moved a floating industrialized factory into the waters off the coast of Antarctica and they are engaged in the systematic slaughter of endangered whales. In fact, they are targeting three different species that include the piked (Minke), humpback, and fin whales.

This year, they have targeted nearly one thousand whales. Next year, they intend to increase the number of whales killed. 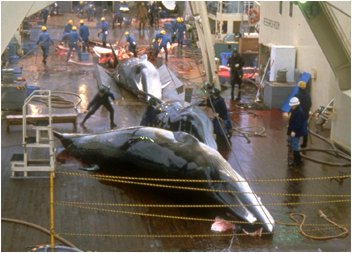 In addition to inflicting agonizing pain and gruesome death upon the gentle giants of the deep, this Cetacean Death Star is presently carrying 132,000 gallons of heavy oil and 211,000 gallons of diesel oil plus large amounts of ammonia, chlorine, and other industrialized chemicals.

Even more alarming is that this toxic death star is now 110 miles off the coast of the largest penguin colony in the world and it is burning out of control. The colony contain 250,000 breeding pairs of Adelie penguins.

The good news is that the fire has prevented the Nissin Maru Death Star from continuing the slaughter of the whales. They have slain about 400 of the 960 whales they have targeted. This means that they have taken less than half of their quota.

The fire has saved the lives of over 500 whales. And the hated Cetacean Death Star is still burning. They will not be killing more whales this season.

Hopefully, the Death Star will not sink off the coast of Antarctica. A spill of oil and chemicals will be bad news for the penguins. The responsible thing for the harpoon vessels to do would be to begin towing the burning killing machine as far away from shore as possible.

The Japanese whalers, however, do not seem to be concerned about the penguins, and so far, have made no move to tow the stricken vessel away from the coast.

Japanese officials have reported that the blaze broke out below deck, where whale carcasses are processed. Most of the vessel's 148-member crew were evacuated to the three harpoon killer boats.

Hajime Ishikawa, an official at the government-affiliated whaling industry's Institute of Cetacean Research (ICR) in Tokyo, said that carrying on the hunt will be "difficult" if the 8,000-ton vessel has to be brought to port for repairs. The fleet planned to hunt up to 945 whales from mid-December to mid-March.

The latest word is that the engines of the Nisshin Maru cannot be started.

The ICR Spokesman Glenn Inwood said the New Zealand-owned tug Pacific Chieftain, the closest salvage vessel to the Nisshin Maru, was 6 ½ days away.

If forced into port in New Zealand or Australia, the Humane Society International has threatened to have the Japanese boats arrested for crimes against the whales and the environment in the Antarctic Whale Sanctuary.

One thing for certain - the 2006/2007 whaling season has been a disaster for the Japanese whaling fleet. The Cetacean Death Star has been knocked out of action for this season and with luck will not be operable by the end of the year.

But if it is, Sea Shepherd ships will be back in the Antarctic Whale Sanctuary to once again intercept and disrupt their lethal criminal activities.