The Empire Strikes Back

The Sea Shepherd ships Steve Irwin and Brigitte Bardot returned from Europe via the Suez Canal, ran the blockade of Somali pirates along the Horn of Africa and returned to Australia with little time to spare before heading down once more. This time for the eighth campaign to the Southern Ocean Whale Sanctuary to defend the great whales from the remorseless lethal harpoons of that trio of death and destruction – the three Japanese Yushin class harpoon vessels.

Right from the beginning Sea Shepherd’s Operation Divine Wind struck a blow when our scout ship, the Brigitte Bardot, was crippled by a rogue wave forcing the Steve Irwin to escort it back to Fremantle, Western Australia for repairs.

This left only the Bob Barker to chase the whaling fleet until the Steve Irwin could return.

Although Sea Shepherd is able to track the Nisshin Maru with drones, we have not been able to close in on them because the tailing vessels simply relay our position to the factory ship, thus allowing the Cetacean Death Star to move away from us.

They have been doing this for over 12,000 nautical miles.

On the positive side, the constant moving, and the fact that they are only using one harpoon vessel, has slowed down whaling considerably.

But without a scout vessel to catch the Nisshin Maru we can’t block them 100% and thus some whales are being killed.

In the meantime, the small boats of the Steve Irwin and the Bob Barker have been sent out to harass and slow down the tailing killing vessels. It is dangerous, cold and frustrating work.

The harpoon vessels are vastly superior ships, faster and more maneuverable than the Sea Shepherd ships. They have cutting spurs on their shafts to slash defensive trailing ropes and they bristle with water cannons, long range acoustical weapons, concussion grenades and impulse guns.

They also have the advantage of being backed 100% by their government. They know that if they injure or kill any of us, their government will justify it. Our governments on the other hand condemn practically everything we do to interfere with the illegal slaughter of whales in a whale sanctuary.

Only two seasons ago, the notorious Shonan Maru No. 2 cut the stealth trimaran, Ady Gil, in two and almost killed several members of the crew. They did not have to answer to anyone.

Sea Shepherd can only be as effective as the resources available to us and although we have got stronger and more effective every year, it is difficult to counter a war chest of thirty million dollars dedicated to more than half their fleet to the sole purpose of blocking Sea Shepherd ships. 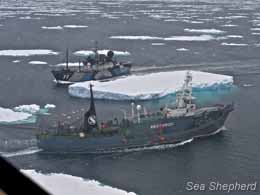 The Steve Irwin chases the Yushin Maru 3 around pack ice. Photo: Billy DangerWe have to admit that we are outnumbered and struggling against a powerful opposition that, in addition to all the confrontations down here in the Southern Ocean, are also exerting political and economic influence on Australia, New Zealand, the Netherlands, Canada and the United States to stop us from defending the whales.

My crew of international volunteers has been performing their duties with incredible courage and determination. Charging into the face of the water cannons and missiles tossed at them, while getting knocked off their boats and almost killed by grappling hooks so sharp that they tore gouges through the seats and transom of the our Delta boat. My crew has even been hit in the face by long poles while bamboo spears were tossed at them. All of this in sub zero temperatures in a frozen, ice-studded sea.

The Japanese Empire has struck back in their determination to slaughter the largest and most intelligent creatures in the sea, and although they will not secure their grisly quota they will still take the lives of a few hundred whales.

For Star Wars fans, the similarities between that epic story and what we are doing is interesting. Sometimes we feel like we are on a spaceship isolated in a vast ocean as we thread our way through icebergs and floes in search of a huge ship of death while being attacked by, and taking action against, fast, sleek, superior ships.

Death is just as quick and assured should we fall into the surrounding black water, as if we were to step outside of a spacecraft.

I was quite thrilled a couple of years ago when George Lucas stated that he liked the episode in Whale Wars where we lost the tailing security ship in a field of icebergs and fog by hiding behind a large iceberg, watching the Japanese ship move past us on radar. He compared it to the Millennium Falcon losing the star trooper pursuers in a field of asteroids.

There are those who say that the whalers are not evil, that they are just men doing their jobs. Auschwitz prison guards were men doing their jobs also, but they were evil and only the darkest of hearts could shoot a defenseless, intelligent whale in the back with an explosive harpoon and feel nothing as the agonizing screams of a tortured and dying whale fill the air.

Where do we go from here?

We continue to slow the whalers down for the remainder of the season as we keep the Cetacean Death Star on the run. At the same time, we prepare our to return to the Southern Ocean for the 2012-2013 whaling season.

This means working hard over the next 10 months to raise the funds to have the Steve Irwin and the Bob Barker maintained, to repair the Brigitte Bardot and to secure a fourth ship, a second scout ship, faster than the harpoon vessels but large enough to block the Nisshin Maru.

We need to return with four ships, a helicopter, drones, small boats and a crew willing to risk it all to defend the whales and the oceans.

The Japanese whaling fleet survives only because of subsidies and only because they misappropriated funds sent by well-meaning people from around the world, eager to help the victims of the disasters that took place in Japan last March.

The horrendous Japanese whale slaughter survives because the Japanese government betrayed the people needing help and the people intending to help them.

The last thing that people thought when they wrote out a check to assist the homeless tsunami victims in Japan was that their money would be used to fund the slaughter of whales in the Southern Ocean.

And so the shameful serial killing of whales continues as a glorified welfare project in full contradiction of Japan’s so-called capitalist economic system.

The Japanese whaling industry is now just another corporate welfare bum living off the backs of the Japanese people.

Sea Shepherd will however end whaling in the Sanctuary or we will bloody well die trying.

The Force is with us and the Dark Force is with the killers in this classic epic struggle between good and evil, life and death, humaneness against inhumanness, kindness against cruelty and compassion against gross arrogance.

Down here in the remote and hostile, dark, cold waters of the Southern Ocean Whale Sanctuary, the good guys wear black.