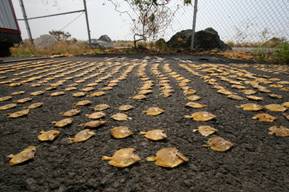 An aquarium hunter threw hundreds of yellow tangs into a dumpster at Honokohau Harbor, Kona—never mind: plenty more where they came from. Photo: Teri Leicher

Since becoming governor in 2012 Neil Abercrombie's approval rating has sank to the lowest in the nation—marked by miscues, detachment, buffoonery, and political payoff. When he made William Aila Director of Natural Resources, the inner sanctum swore, "Neil didn't know that Aila was a licensed aquarium hunter." With strong ties to the aquarium trade, Aila campaigns to entrench the trade in Hawaii reefs, just as he led opposition to legislative regulation over the years. Abercrombie will likely be challenged, but I am not a candidate. If nominated I will not run. If elected...

The aquarium trade continues to ravage iconic species—yellow tangs, butterfly fish, the Hawaiian cleaner wrasse, and many more. Yellow tangs are herbivores, controlling algae with constant grazing and their absence leaves reefs vulnerable to algae overgrowth. The Hawaiian cleaner wrasse is endemic to Hawaii and dies in 30 days of captivity, yet is for sale online. Their absence allows parasite loading on many reefs. 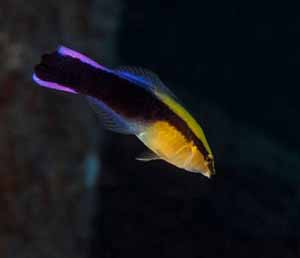 The list is long. Flame Angelfish are virtually gone in Hawaii, with a few individuals living anonymously in the Flame Angel Protection Program. 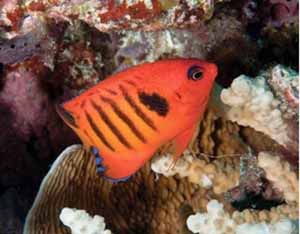 Flame angel: A most emotional fish.

When a well-nourished woman yelled, "I want that one!" to the goombas converting a pinball machine into an aquarium on the reality show Tanked, she fanned another flame—flame angel "inventory" now comes mostly from Christmas Island, again with no limit or control in another species genocide. 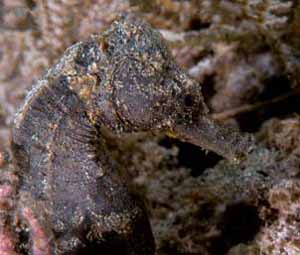 Indigent humans catch endemic Hawaiian seahorses in shallow nursery areas and sell them cheap to dealers who ship to resellers on the mainland.

All three seahorse species found in Hawaii are listed on CITES APPENDIX 2 as "vulnerable to extinction," like the Hawaiian monk seal and green sea turtle. The State of Hawaii recognizes federal protection for monk seals and sea turtles, but not seahorses because the State has conducted no assessment. So seahorses are another "managed fishery." The Hawaii Department of Land & Natural Resources (DLNR) began in 1956 to manage fisheries—including the aquarium "fishery." It took 23 years to stop the trade in one species of coral, even as whole reefs went to rubble. Only in the late '90s did DLNR ban all coral and live rock trade. Now Hawaii reef habitat is 100% protected, while reef wildlife "vulnerable to extinction" is still fair game to the aquarium trade.

Quality Marine is a major wildlife trafficker for the pet trade, with holding tanks across the Western Pacific -and a dirty profile. An observer at the Quality Marine depot (holding tanks) in Tonga saw hundreds of Lemonpeel Angels and many more wrasse species. Each Lemonpeel angel was in a short length of 2" PVC, waiting for more Lemonpeels to fill the order. But more did not come. Those on hold starved. Their fins rotted from dirty water. So Quality Marine had to release them—into the adjacent murky bay miles from their home reef in blue water. Fuel-cost, man-hour, and other resource saving makes Quality more profitable. Quality Marine's depot in Fiji is nearer the international airport but farther from home reefs, where massive extraction leads to a tortuous series of bumpy rides. Another observer at a 5-star hotel nearby saw no fish on formerly abundant reefs. While development runoff is the culprit, reef decimation on Viti Levu has driven collectors far afield, leaving a wake of reef decimation except for reserves, just like in Kona. Aquarium collectors in Fiji and Kona agree: "It's good! Plenty of fish!" Anecdotal evidence is not data. It's emotional. 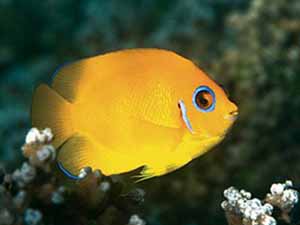 Quality Marine now offers an endemic Hawaiian seahorse, however not on a weekly stock list that could trigger public outrage. Quality calls around, discreet as a dealer in contraband. Likely consumers include the Scripps Institute, Long Beach Aquarium, Arizona Aquarium, Georgia Aquarium and the New England Aquarium, all self-righteous to a fault, supporting dirty traffic from a dirty supplier to sell more tickets. These seahorses are extremely fragile, up to 10" long with long odds on survival. Ocean Rider Seahorse Farm in Kona estimates a one-month survival maximum with home hobbyists or slightly longer with public aquarium experts—or death in transit.

Also in the news, DLNR charged a diver with "fisherman harassment" for photographing an aquarium collector on the Kohala Coast (North Kona, Hawaii Island) with anchor, chain and net in the coral. DLNR ordered the photos removed from her Facebook page, but the case was dismissed in court because the charge was bogus. DLNR did not charge the aquarium collector citing "we cannot bring charges without proof of coral damage."

Soon after, the Kona Aquarium Collectors President called out at a public hearing, "Snorkel Bob is an eco-terrorist" but has yet to show evidence beyond incendiary emails. That same aquarium hunter got caught plundering a closed reef at Miloli'i, the last working fishing village in Hawaii. Willie Kaupiko caught him blubbering that it was an honest mistake. The next month Kaimi Kaupiko caught him again—and again.

These crimes solidify consensus in Hawaii as it builds from distaste to dislike to exasperation to banning the aquarium trade. Also notable in recent months:

1) Maui County Council passed two ordinances regulating the business side of the aquarium trade. The first prohibits animal cruelty, making marine wildlife trafficking impractical. The second ordinance requires permits and commercial zoning—Maui collectors and dealers in home garages with huge oxygen cylinders (HAZMAT) were poised to take out neighborhoods. Now it's illegal. County jurisdiction stops at the high-water line, but these two new county laws forced the biggest collector and the biggest dealer (his wife) to move to the Big Island, hub of the aquarium trade in Hawaii, and where:

4) So did Kauai County Council.

Finally, the Banggai cardinalfish, a spectacular, abundant species faces extinction by aquarium collectors. So a few aquarium traders caught 1,000 endangered cardinals as "brood stock" for captive-breeding to redeem "the hobby." All died, because they were allegedly "sick" when caught. So it was Neptune's fault. One aquarium rag called this calamity the "Banggai Rescue" in another Orwellian attempt to change truth. When Dr. Alejandro Vagelli blamed the aquarium trade for hammering Banggai cardinalfish, the same rag said, "Dr. Vagelli's work has been questioned by some." The trade will asperse any criticism on wildlife trafficking. Better to endanger a species or two rather than billions in revenue.

Tier 2: the Resellers and Retailers:

Soon after Petco opened on Maui, it was charged with animal abuse on Oahu. Two dog owners alleged mangled claw stumps and paw bleeding. A third owner alleged her dog's ear was severed and "glued back on." When Petco brought marine wildlife to its Maui store, customer photos of dead and dying tangs touched a Maui nerve. 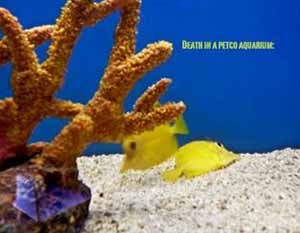 Demonstrations received media attention; so two Petco VPs came from LA to see if we might better understand each other. Do we ever. Petco Veterinary Affairs VP Tom Edling said, "You love your cat. You love your dog. Why can't you accept that some people love their fish?"

"Because dogs and cats are domestic breeds, Tom. They do poorly in the wild, but wildlife is born to the wild and does poorly in confinement, with high mortality and negative consequence to natural balance."

Petco Animal Care & Education VP Marci Whichard said Petco's support of Rising Tide proves a "commitment to conservation." Rising Tide is a green-wash of SeaWorld's brutal appetite for marine wildlife that includes fish, orcas and dolphins as seen in The Cove. Rising Tide "promotes the use of captive-bred marine species for the aquarium trade" but will not require captive-bred species. A SeaWorld woman called to see if we might "work together on this." She was not amused to hear that we could no sooner work together than Hadassah could co-op a fundraiser with the Aryan League.

During weeks of haggling Petco probed for an opening. It came on captive breeding. Reef Rescue Alliance director Rene Umberger wanted a compromise, whereby Petco's 900-store and Internet sales would offer only captive-bred marine species. But we've seen the captive-breeding green-wash. Aquarium hobbyists brag about tanks that are 50% or 80% captive-bred. With 700,000 home tanks in the U.S. and 1.5 or 2.5 million tanks worldwide, demand rises for wildlife by hobbyists who feel captive-breeding cleansed, who justify a guilty pleasure, like a Hawaiian cleaner wrasse or a dragon moray or any exotic species that will perish in a glass tank. But the deal was struck with hope for progress. A week later, Marcie Whichard called with "wonderful news! Petco will pledge to sell only captive-bred marine species!"

"When will captive-bred-only sales begin?"

"I can't say when. We have to sell our inventory first. Obviously!"

"How often do you turn your inventory over?"

"So you could commit to captive-bred-only sales in three to six months?"

"Can you say something? We may have some flexibility here, but we at least need a range as a basis. Can you say the long and the short of it?"

"Look. We're not going to commit to a schedule. What if we say five years and can't make it? Or ten years?"

So much for progress at Petco, but progress happens. A financial advisor copied on an email blast or Facebook posting made contact. He called himself a conservative Republican, demonstrating that animal rights may be the most bi-partisan issue in the world today. Animal lovers are rarely motivated by rationale or logic; they rise to sheer, crazy love. I did not press him on Mitt Romney's dog; we had bigger tofu to fry. The advisor advised that two private equity firms (like Bain Capital) bought Petco in 2006 in a strong market, planning to streamline payroll, show potential (new stores), and then take Petco public with an initial public stock offering (IPO) aimed at $2 billion. He advised that private equity firms don't tamper with "internal management of assets" unless the IPO gets bad press. So began the campaign to encourage Texas Pacific Group (TPG) and Leonard Green & Partners to stop trafficking in marine wildlife. The IPO approaches. Huge institutional funds will buy an IPO unless it's tainted. Petco is tainted.

PETA joined the Petco campaign with a global alert to millions. Sea Shepherd Conservation Society is on board. Petco VP Whichard whined that Petco is tiny in the grand scheme of things, that every captive-bred marine critter available would not meet Petco demand, that Petco pulling out of wildlife sales would actually "hurt our cause." The PETA rep. remembered Ms. Whichard. "Did she cry that she could lose her job over this?" Well, yes, she did—as she had done over the sale of big, wild birds at Petco. To be continued...

Part two of this article "Tier 3: The Demand Side, Home Aquarium Hobbyists" will be published September 7th, 2012.