A dominant male parrotfish morphs from female, making this comparison backwards, but the gender shift is notable. One theory is that many male aquarists have taken up tennis or photography—have drained their tanks and moved on to less damaging pursuits. We can only speculate. In the past I compared aquarium hobbyists to the men in Predator Raw. That comparison was harsh, and I regret it and will not make it again, because peace comes to the willing.

MASNA stands for Marine Aquarium Societies of North America, which is not the moniker I commonly use when referring to them. Like all aquarium hobby groups, it strives to paint itself green, claiming salvation for reefs around the world through aquarium extraction to serve the home hobbyist. That is, people trash their reefs, unless those reefs represent income from the aquarium trade. MASNA also joins the Hawaii aquarium collector chorus, that aquarium extraction is not the sole cause of reef decline.

The MASNA 2012 forum was open, and though the panelists represent the supply side, they spoke to misperceptions and concerns of home hobbyists—especially those aquarists who may...give it up. Foremost is the concern that emotion now rules aquarium discourse in Hawaii. I agree. Hawaii history is rife with emotion. Unfortunately, the emotional factor aligns the aquarium trade again with events occurring in emotional vacuum—like with Genghis Khan, Attila the Hun, Caligula and, in modern times, the ultimately emotionless Himmler, Goering, Goebbels, Eichmann and the whole, emotionless Hitler crew. The aquarium trade will charge that the Nazis were killing people, not fish! People have been eating fish since forever! Yes, and that's how the aquarium trade attempts to justify massive extraction of species on the verge of extinction. "You eat fish, don't you?" The aquarium trade plays the fishing link, as if eating fish justifies animal cruelty, confinement, and reef devastation. What if they came to your neighborhood to net the colorful songbirds? So? "You eat chicken, don't you?" 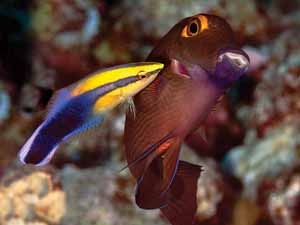 Eric Cohen of Sea Dwelling Creatures in Los Angeles is a major trafficker of Hawaii reef wildlife for the pet trade. He lamented the Honokohou fish kill for its damaging imagery and urged: "We need to show boxes and boxes and boxes of live fish arriving healthy and being dumped into aquariums where they're happy!" Like this?

When the Senate Water & Land Committee got this tang-in-a-bag photo in 2008, William Aila said: "I should bring my favorite shot of a yellow tang. He's on a grill!" The aquarium collectors shared a hardy guffaw. Aila is now DLNR director—"This is not a resource issue but a user conflict." Tang in a bag photo from the Hawaii Audubon DVD, Impacts of the Marine Fish Aquarium Trade.

Eric Cohen of Sea Dwelling Creatures in Los Angeles calls himself a stakeholder in Hawaii reefs. What's the difference between a stake and kuleana? In this case the stake is monetary. Kuleana is Hawaiian, meaning responsibility, usually to a conviction or belief. Eric Cohen said, "Hawaii is very dear to me, with all the friends I have there." That sounds emotional. Eric Cohen then advised: "Fish populations have reached maximum densities in areas closed to aquarium collectors." Again, he spoke from his anus. Fish populations are down in spite of the FRAs and species are disappearing—all butterfly species, bandit angels, flame angels, and many more-many endemic. Eric Cohen is fluent in anuspeak—he's the guy who developed the "Smart Fish Program." Brace yourself. The Smart Fish Program will save reefs with aquarium collectors. Nobody knows reefs or fish like aquarium collectors, and they'll see what's abundant and take only those fish. They'll also see what's not there or scarce and leave those fish alone. Eric Cohen wanted the emotionals in Hawaii to drink this Kool-Aid.

Next came the moral question on marine wildlife trafficking. One panelist said: "The moral issue is a tough one to fight. It's hard to say we have the moral high ground." Another MASNA panelist claimed that the aquarium trade has the moral issue cornered: "We are the ark of conservation efforts." He meant the ark with two of each species and Noah at the helm to survive the flood, not a multi-billion dollar industry taking 25-30 million critters annually to drive sales of tanks, stands, lights, filters, pumps, chemicals, salts, and little treasure chests with scary plastic skeletons inside. Or as one panelist put it, "We can't use the ark argument with our volume." Another panelist felt that the ark won't work if they can't release fish into the wild. Yet another panelist offered, "I think we should, kind of, you know, be more responsible with our fish purchases." And the best response to the moral issue: "I did have a moral argument and then it slipped out of my brain completely." That was Richard Ross, a biologist for the Steinhart Aquarium. The octopus is the most intelligent of invertebrates and may outpace a few spinals in compassion and common sense as well. Both these specimens are compromised. 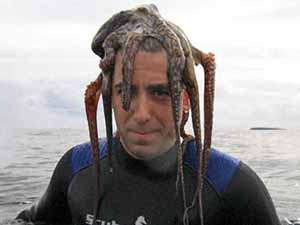 Richard Ross, "biologist" at the Steinhart aquarium. "You eat fish, don't you?"

Or is this what people need to see? 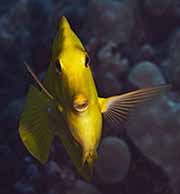 With a painfully advanced degree in "aquarium science" Andrew Rhyne depends on the trade for employment. He described the "race to the bottom," whereby a colorful fish sells for a few bucks, triggering more catch, driving the price down, decimating the species, driving the price up, triggering more catch till the species is gone. The panel asked him to stop using that language.

Wildlife trafficker and analinguist Eric Cohen reported that Bill Walsh, the State of Hawaii's point guy for the aquarium trade in Kona, "has seen severe declines in the open areas (plunder zones) in Kona. Bill Walsh says only 40% of Hawaii (aquarium) licensees are reporting." A crosscheck with airline manifests could make them honest. Walsh doubted airline compliance, so Cohen asked, and the airlines will, but Walsh isn't eager.

Back to Andrew Rhyne and a remedy for "the situation in Hawaii." Rhyne speaks against Hawaii legislation on behalf of the New England Aquarium (In Hawaii?), because public aquariums need local collectors on remote reefs to feed their voracious appetite for wildlife. Redeeming his "race to the bottom" faux pas, Rhyne said: "The emotional arguments (against the aquarium trade) are really kind of ridiculous. The aquarium industry is being scapegoated... We need more propaganda through DLNR." How much more propaganda can DLNR provide? "We need to educate Hawaii on the sustainability of the aquarium trade." Hawaii reef wildlife resellers have transshipment centers near LAX. Andrew Rhyne wants these marine wildlife traffickers in LA to educate Hawaii. He might as well educate LA on sustainable freeway shooting, but who would pay him?

MASNA is the same crowd calling legislative efforts against the aquarium trade "a series of failures." But two-thirds of Hawaii residents now want the aquarium trade banned. The aquarium trade claims that Hawaii has been duped and cheated and refers incessantly to "the hobby, our hobby," in an eerie disconnect—like the 50 Hawaii collectors going tooth and nail on a million-dollar catch—that's 20 grand each, annual, for full-time ocean work. Motivation defers to the bottom line, billions in aquarium hardware supported by trafficking in dwindling marine wildlife species. The aquarium junta is no more about a hobby than I, Snorkel Bob, love tiddlywinks. The aquarium trade and the campaign to ban it represent cultural and moral conflict. Like most wars, this one also wages over resources. William Aila at DLNR gave the trade its primary talking point: "This is not a resource issue but a user conflict." The phrase makes no sense but became the aquarium mantra, as if to absolve the Department from resource protection—as if marine wildlife is not a resource or extracting is the same as using. The stakes are high, with billions in revenue and stock market offerings on one side, and Hawaii reef recovery on the other.

Beyond practicality is morality, in this case obvious to some, a blind spot to others. The aquarium trade hammers yellow tangs, undermining reef maintenance. Yellow tangs live to 40+ years on a reef. They start dying off at the point of capture. Deaths mount as they transship around the world. Fewer than half may make it to hobby tanks. Most of those die in the first month from hobbyist error and accrued stress. Twenty four million reef fish, hermits, and shrimps annually supply just 700,000 U.S. saltwater aquarium hobbyists.

Richard Xie is a major marine wildlife trafficker in Hawaii. We worked briefly on a captive-breeding idea that would have funded him and relieved pressure, theoretically, on wild-caught species. Richard developed a tour for hobbyists to net fish on Hawaii reefs and carry them home in plastic bags. Richard maybe never heard of Pele's curse, whereby visitors meet tragedy for taking a pebble from Hawaii. The online offering showed a diver bagging a frogfish. Richard also tried a Chinese Dating Tour, but both tours ended. Anyway, Richard shared his success, taking Flame Angelfish at Christmas Island. Others heard and went for riches of their own @ $40 each. Lacking his skill, the others got home with tanks of dead fish that they used to fill orders, in compliance with no guarantee on live arrival.

Flame angels are sadly iconic to this campaign. Flame Angels is also a novel of Oceania, in which a waterman must reconcile an unseen, fearsome presence as a guiding spirit. Flame Angels resolves right and wrong in seas under pressure—and guess who our hero must challenge on his bearing to salvation? Flame Angels is an ebook (Iguana, Toronto 2012), or you can get a hard copy here at seashepherd.org for $26 and help a few friends of your own who live in the sea. 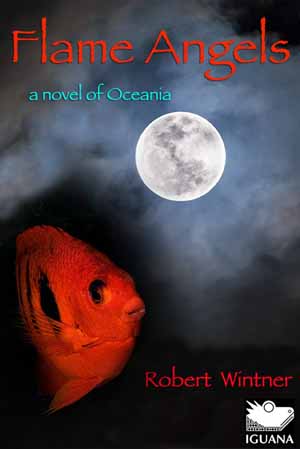 A marine wildlife trafficker called the first aquarium trade summary here in 2010 "a shameless promotion" of my book, Some Fishes I Have Known (Skyhorse, NY 2010). I stand guilty as charged. Brisk sales spawned another new book—Every Fish Tells a Story (Skyhorse, NY 2011)—now at seashepherd.org, where 100% of the proceeds support Sea Shepherd worldwide. Alas, a 3rd volume of marine photography with anti-aquarium narrative is Neptune Speaks (Skyhorse, NY 2012).

So many books, so little shame. The aquarium trade will form a circle and open fire on this commentary. They call me the anti-Christ, Snorkel Bob Round Pants, a maniac on a life mission and a greedy bastard who wants to ban the aquarium trade so the reefs will fill up with fish so I can make more money renting snorkel gear. They will ignore the atrocities. They will bemoan the "doomsday propaganda" and insist "the data proves sustainability." They will lather up sincerely, and I do cop to the life mission and mania rap. But who would I rather have a beer with, an aquarium collector or dealer or "biologist," or a close personal friend who happens to be a gill breather?

The campaign to end marine wildlife trafficking for the pet trade is ongoing. For updates, check with the website for Reef Rescue Alliance.

Take immediate action by emailing PETCO and its holding companies:

Let PETCO know that you will not shop with them as long as they traffic in marine wildlife.

The Hawaii State Legislature & executive branch should also hear your concerns for mismanagement of a public trust and for conflict of interest on commercial reef extraction for the pet trade as supported and promoted by State of Hawaii personnel with strong ties to the aquarium trade.

Send a postcard to Hawaii's elected officials. It's fast, easy and effective–we send it for you. Select one of four designs and customize the message on why you want coral reef wildlife trafficking to end: http://reefrescuealliance.org/

Robert Wintner serves on the Sea Shepherd Board of Advisors. Crewing on the Ocean Warrior in 2001, he helped expose the governments of Japan and St. Lucia for commercial whaling in the Eastern Caribbean with international media exposure, key to safeguarding the whaling moratorium for another year. He is also known as Snorkel Bob, with snorkel shops across the Hawaiian Islands. 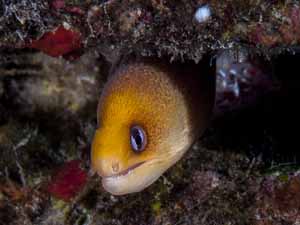