Some of our supporters say they won’t support us anymore in our efforts to protect whales, dolphins and other marine species because they disagree with our campaign to defend sea lions.

“You won’t get another dime from me because of this misguided campaign to save sea lions.” One angry apparently former donor said.

My answer is simply this. “Keep your damn dime, we do not compromise on representing our clients because of money and our clientele includes the California Sea Lion and the Stellar Sea Lion and popular or not, we will not abandon their interests simply because a few humans don’t like them.”

The Sea Lion is being scapegoated because they are (1) convenient, (2) they don’t vote, (3) killing them gives an appearance that the salmon are being protected and (4) the government bureaucrats are simply too damn lazy to deal with the problem in a positive and ecologically efficient manner.

The salmon can be saved by (1) tearing down the destructive damn, (2) banning commercial fishing, (3) banning sport fishing and (4) banning native fishing. And since none of these solutions will be acceptable politically or economically, the bureaucrats have opted for the illusion of a solution by killing a few Sea Lions.

The Sea Lions eat between 1% and 4% of the salmon. The fishermen take 17% and the dam kills another 17%. Cutting the fishermen’s take by 4% would offset the take by the Sea Lions.

The Sea Lions have a greater right to the salmon than fishermen, native or non-native because the Sea Lions were established in this area and feeding on salmon tens of thousands of years prior to any human settlement in the Americas. 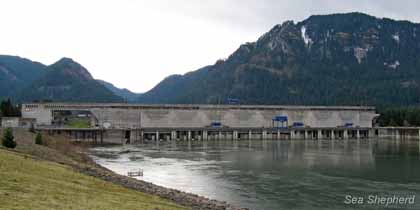 The biggest salmon killer of all, the Bonneville Dam on the Columbia River.
Photo: Erwin Vermeulen

For those who think that the Sea Lions are invading the Columbia River basin, it may be worth noting that Lewis and Clark reported Sea Lions feeding on salmon far upstream at the foot of Celilo Falls along with the Black and Grizzly bears whose take is now non-existent.

I would argue that the right of a Sea Lion to catch a salmon should take precedence over any human take of salmon because Sea Lions have a prior claim and they are protected under the Marine Mammal Protection Act. They are also completely dependent upon fish for survival.

Why should nearly 500 Sea Lions be massacred so that humans can catch salmon for sport?

The argument that the salmon are endangered is negated by the fact that humans are allowed to fish for them. Under the Endangered Species Act fishing would be prohibited if in fact the salmon were listed as endangered.

The Sea Shepherd Conservation Society is very concerned about the salmon and we advocate the prohibition of sport and commercial fishing in order to allow both the salmon and the Sea Lions to survive.

Killing the Sea Lions is not a solution. The vacuum created by the deaths of 500 Sea Lions will bring even more Sea Lions to the area because the Sea Lions established in the area have contested and won the ground to claim possession of the fish. Even younger Sea Lions will move in to contest the territory, which will lead to further demands for their slaughter.

There is not a single human being who will starve if denied fishing rights. The Sea Lions however have no alternative. Hunger drives them up the river and hunger drives them to risk the government death squad mobilized to destroy them.

All up and down the Pacific Coast humans have driven Sea Lions from their natural habitats. We harass them when they come ashore, we shoot them simply because they are hungry, we steal the food from their mouths in the sea and the rivers, and we flush our sewage and our chemical waste into their habitats and then we use them for scapegoats to give the illusion that the government is concerned about protecting the salmon.

What the bureaucrats are doing is not protecting salmon. What they are doing is whoring for votes at the behest of the politicians who want the fishermen’s vote.

So the Sea Shepherd Dam Guardians are there to oppose the slaughter of the Sea Lions non-violently and legally. We are supporting the Humane Society of the United States in their legal challenge to the killing and we are there to focus international attention on this shameful scapegoating of a species that has every right to be where it is, doing what it is doing.

So to those who say they will no longer support us because we are defending Sea Lions, our position is that we do not need your support. We are not an organization that pretends to be all things to all people. Our support base may be human but our clients are marine species from the plankton to the great whales with no exceptions in between.

There is no amount of money that can deter us from a 100% allegiance to our clients in the sea.  We are not here to make people feel good. We exist to be effective and effectiveness means saving lives and defending biodiversity and the protection of marine habitats.

This may well be an unpopular stand with some people but the position of the Sea Shepherd Conservation Society is that we oppose the killing of Sea Lions by the United States government in the waters of the Columbia River.